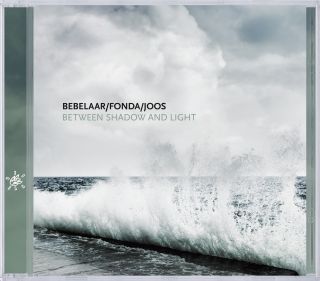 Between Shadow and Light

Catalog number: DMCHR 71108
Releasedate: 01-05-12
Transatlantic cooperation at it´s best: two German and one American Jazz-Icon join forces to create a fruitful combination of “American jazz linked with European worlds of feelings”, as Bert Noglik (author of many books about jazz and now also artistic leader of the Berlin Jazz Festival) said in the liner notes
Patrick Bebelaar, know from his Duo recordings with Michel Godard, presents a transatlantic project with roots in both continents The leitmotif of the recording - rather one sound less than one too many – results in a highly sensitive and respectful interplay.
Listening to the communication of this three great artists is pure pleasure.
A few piano chords by Patrick Bebelaar. Each one resounds in the room, with a healthy reverberation. Joe Fonda's rapidly plucked bass tones join them as if from nowhere and slowly develop into a small foundation. The piano begets a romantic medley of tunes. Wonderfully peaceful and gently swinging at the same time. The final notes. The final notes? That's what you think! The piece is already past the halfway point when Herbert Joos' trumpet joins the two, breathy and scintillating. This is the impressive beginning of "Between Shadow And Light".
Presence through reduction – rather one sound less than one too many: that's the leitmotif. This area between shadow and light, between major and minor keys, between "black" and "white" jazz is the special feature of this recording, but which also completely fills the edges of this intermediate space. It could just as well be titled "Shadow – Light – And In Between". The fact that Bebelaar has mastered playing intermediate tones on the piano is something that he recently proved on "Dedications" (INT 34342), his duo album with Michel Godard. He is also presenting his very original ideal of sound here and found a kindred spirit in Herbert Joos. They advance in step grasping intermediate spaces in a profession that was called "European chamber jazz" in its beginnings. But this is a jazz of worlds, colorful jazz in black and white. The American Joe Fonda also ensures the black and white. Whoever is reading this has probably already heard him, because Fonda's bass playing has already refined more than one hundred albums. When you know that his previous co-musicians were big names such as Anthony Braxton, Barry Altschul, Archie Shepp, Herb Robertson and Billy Bang, then you listen to his bass on "Between Shadow And Light" with other ears, because he fits in the ambience so well and so touchingly, not at all hectic or agitating. And Clifford", also provide shadow and light or black and white. "As a result, the impetus from American jazz is linked with European worlds of feeling," as Bert Noglik wrote in the liner notes.
Pianist Patrick Bebelaar studied at the College of Music in Stuttgart. He was awarded the Baden-Wurttemberg Jazz Prize in the year 2000. He composes for the order of the International Bach Academy and the German Literature Archives. Concert tours have taken him repeatedly to South Africa, and he has also performed on stage in India, Russia, the USA, Dubai and – of course – Europe. Bebelaar has performed genre-overlapping with writers such as Peter O. Chotjewitz, Peter Härtling, Oskar Pastior and Wolfgang Kiwus. And he is currently performing increasingly with his duo partner Michel Godard to present their album "Dedications" (INT 34342) to their fans.
Joe Fonda was born in Amsterdam, New York, in 1954. He recorded his first album after he completed his bass studies at the Berklee School of Music. Another 116 have followed till today, on which he plays as a sideman or as a first among equals. Fonda is a bassist, composer, producer and even dancer. His multiple talents and great range of skills demonstrate his joy in all kinds of demanding music-making. As a result, he is an ideal member of "Between Shadow And Light".
Presenting Herbert Joos to a German-speaking public makes less sense than carrying coals to Newcastle. He has been honored as a master of the trumpet and flugelhorn at least since his first solo album "The Philosophy Of The Flugelhorn” recorded in 1973.