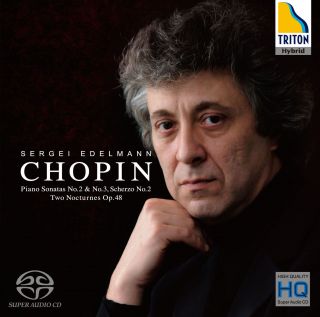 “Chopin composed almost exclusively for his own instrument, the piano – mostly in miniature genres, but three times in the more ambitious multi-movement form of the sonata. The First Sonata is a product of his student years, but the other two were written when he was at the height of his powers. Both succeed triumphantly in combining Chopin’s individual brand of virtuosity with lyrical melody and organic development – thanks in part to treatments of traditional forms which were once considered inept or even ignorant, but which are now recognised as perfectly calculated to achieve the composer’s expressive aims. […]

[...] Chopin borrowed the title of “scherzo” from the larger genres of sonata and symphony, and applied it, along with its associated triple time and A–B–A outline, to four free-standing piano pieces which far transcend the word’s literal meaning of “joke”. The Second Scherzo, composed in 1837 around the same time as the Funeral March of the Second Sonata, combines coruscating piano writing with an unusual expanding form.
[...] The title of “nocturne” was coined by the Irish-born composer-pianist John Field in the 1810s for a series of pieces featuring delicately decorated singing melody over a regular accompaniment. Chopin took over the concept, but in the course of his career broadened it considerably. For example, the first of the two Op. 48 Nocturnes which he composed in 1841 is not so much lyrical as dramatic in character […...] although the second of the pair is more characteristic of the genre, it has a sharply contrasting middle section, in a slower triple time with hints of mazurka rhythm – another example of the radical approach to form which is such a central feature of Chopin’s unique art.“

Born in Lvov, Ukraine in 1960, Sergei Edelmann comes from a long and outstanding musical heritage; his father, Alexander Edelmann, renowned pianist and pedagogue, a pupil of both Felix Blumenfeld (professor of Vladimir Horowitz) and Heinrich Neuhaus (professor of Sviatoslav Richter) taught Sergei since the age of 5. In his native country, Sergei’s first orchestral performance was at the age of 10 playing Beethoven’s First Piano Concerto. He subsequently performed extensively in recitals and with orchestras throughout ex-USSR. Sergei Edelmann came to the United States in 1979. Within his first year here, he quickly established himself as a significant and highly acclaimed pianist of his generation. Not long after his debut performance in the United States, one of Los Angeles’s major concert critics described the excitement generated by Sergei’s performance: “Music reviewing, as a profession has its perils, but one of its rewards is the shock of unexpectedly stumbling onto great talent. That happened last night when this young pianist, Sergei Edelmann, gave a recital to our full house audience”. And, after his debut recital in Chicago’s Orchestra Hall, one of the most respected and feared musical critics, Claudia Cassidy, wrote in the Chicago Magazine: “Sergei Edelmann walked in the Orchestra Hall a stranger and out of it one to be cherished”. Sergei Edelmann has since become a leading artist both in the concert hall and in the recording studio. His BMG Classics/RCA Red Seal CDs with the Bamberg Symphony under the baton of Claus Peter Flor and the Stockholm Philharmonic Orchestra with Paavo Berglund include both Mendelssohn concertos and the Strauss Burlesque, and his series of solo recordings of Beethoven, Schubert, Schumann, Chopin, and Prokofiev, have gathered enthusiastic critical acclaim. His solo recitals in the United States have included Chicago’s Orchestra Hall, New York’s 92nd Street “Y” and Metropolitan Museum of Arts, Pasadena’s Ambassador Auditorium among numerous others. In Europe he has performed in Paris, Amsterdam, Brussels, Madrid, Munich, Detmold, Frankfurt, Milan, Turin, Ferrara and in Asia he regularly appears in Tokyo, Taipei and Seoul. Mr.Edelmann has appeared with the Cleveland Orchestra, American Symphony Orchestra at the Carnegie Hall, the London Symphony Orchestra, the Orchestre de Paris, the Washington National Symphony Orchestra (at the invitation of Mstislav Rostropovich), the Toronto Symphony, the Dallas Symphony, Jerusalem Symphony, Haifa Philharmonic Orchestra, Mexico Philharmonic, Orchestra National de Buenos Aires in Teatro Colon, Saint Louis Symphony, Buffalo Philharmonic, Seattle Symphony, Orchestra Verdi in Milano with Vladimir Yurovsky, the Rotterdam Philharmonic with Valery Gergiev, the Maggio Musicale Festival of Florence, tour of Italy with Moscow Soloists under Yuri Bashmet, the National Symphony of Johannesburg and the Cape Town Philharmonic in South Africa and other major orchestras across Europe, the Far East, and North and South America. A true collaborator Mr.Edelmann enjoys festival appearances that afford him the opportunity to work with friends and colleagues. Among his chamber music partners: violinists Philip Hirshhorn, Dora Schwarzberg, Sergei Stadler, Alissa Vaitsner, clarinetists Michel Portal, Pascal Moragues, Julian Milkis and Paul Mayer, violoncellists Mario Brunello, Dmitri Yablonsky and Sviatoslav Zagursky. In France he has appeared in La Rocque d’Antheron, Tours, Dinard, Nancy, Sully and Radio France Montpelier music festivals. He is a regular guest at the Elba International Music Festival in Italy where, over several summer seasons Mr.Edelmann has collaborated with violist Yuri Bashmet, violinist Victor Tretyakov and cellist Mario Brunello. They premiered in Italy Gya Kantcelli’s Piano Quartet and Penderezky Sextet. In September of 2006, at the opening of 10th anniversary Festival, he performed the Schumann piano concerto with “New Russia” Symphony Orchestra conducted by Yuri Bashmet. Following that concert, Mr.Edelmann performed in the Mozart celebration concert with Moscow Soloists at the famed Great Hall of the Moscow Conservatory in December 2006. In January 2008 Mr.Edelmann was invited to be a soloist in J.Brahms Piano concerto No.2 with Sinfonia Warsovia under the direction of Peter Csaba for the tour of Italy. Other leading artists he has collaborated with include conductors Franz Paul Decker, Valery Gergiev, Claus Peter Flor, Lawrence Foster, Hans Graf, Gunther Herbig, Raymond Leppard, Yoel Levi, Vladimir Yurovsky, Eduardo Mata, Gerard Schwarz, Peter Csaba, Lawrence Leighton Smith, Semyon Bychkov, Catherine Comet and Maxim Shostakovich. Sergei Edelmann is a winner of the Young Concert Artists International Auditions, the Gina Bachauer Memorial Scholarship at Juilliard, and a major prizewinner of Belgium’s Queen Elizabeth International Competition. Mr.Edelmann is also the recipient of the prestigious 92nd Street YM-YWHA’s Shura Cherkassky Recital Award. In addition to his concert activities, Mr.Edelmann devotes a considerable amount of his time to teaching. He was a Professor of the Piano Faculty at New York University from 1996 to 2001 and currently is a Guest Professor of Piano at the Musashino Music Academy in Tokyo until March 2009.