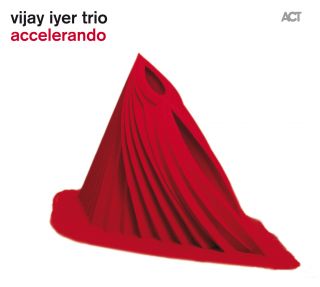 Catalog number: ACTLP 95241
Releasedate: 24-02-12
Surprising interpretations of traditional jazz, vintage and recent pop and funk tunes as well as Iyer's own infectious compositions: One of the most important pianists (The New Yorker) is back with his award-winning trio.
Pianist-composer Vijay Iyer's career has moved on an ever-accelerating arc over the past decade and a half, with the Indian-American artist earning a slew of international honors for his intrepid, multi-hued vision of 21st-century music. The latest chapter of this compelling story in contemporary jazz comes with the Vijay Iyer Trio's Accelerando, an album driven by the visceral, universal, intoxicating experience of rhythm. To be released in March 2012 by the German independent label ACT Music + Vision, Accelerando sees Iyer and his telepathic trio mates – bassist Stephan Crump and drummer Marcus Gilmore – go both deep and wide. They light up material that ranges from a brace of bold Iyer originals and pieces by great jazz composers (Duke Ellington, Herbie Nichols, Henry Threadgill) to surprising interpretations of vintage and recent pop and funk tunes (Michael Jackson, Heatwave, Flying Lotus). Absorbing and infectious, this is jazz about not only the mind but the body.

With an advanced education in the hard sciences and his facility for complex music, Iyer could have been pegged as a "cerebral musician." But, he insists, "I actually experience music on a visceral level, the way most people do. Dance is just a bodily way of listening to music – it's a universal response. Jazz has always had some sort of dance impulse at its core. Bebop grew out of swing, which was a dance rhythm that became art music. I never want to lose that foundation of rhythmic communication in my work. That's what Accelerando is concerned with, that physical reality of music. For me, music is action."

Iyer has played with Memphis-bred bassist Stephan Crump since 1997 (when the pianist had first moved to New York City) and with Marcus Gilmore since 2003 (when the drummer, grandson of legendary jazz stickman Roy Haynes, was still attending New York's LaGuardia High School). The overwhelming response to the trio's 2009 album, Historicity, gave these musicians the opportunity to hone their group interaction in front of audiences around the world for two years. Iyer says: "We found more possibilities for spontaneous arrangement, textural and timbral extremes, and ensemble interplay. Our approach is less and less soloistic lately; it's more about developing a collective energy and momentum. When you hear us now, you can tell that it's us."

As very contemporary musicians, Iyer and his trio mates have a wide purview when it comes to a group approach to rhythm. "The way we come to rhythm is inspired by Bud Powell and Max Roach, Ahmad Jamal, Ellington and Monk, but it is not limited to that," he says. "There is the way James Brown approached it, and the way Jimi Hendrix, the Meters or Earth, Wind & Fire did it; there is the influence of Indian music, African music, Javanese gamelan. There is a whole world history of groove and pulse to draw on, and we do. When it comes to co-articulating a groove and thinking about the subtle dimensions of the beat, we aim to push and pull, to incorporate as many different ideas of orchestration, touch and dynamics as we can so that the rhythm breathes just like a body does."

The range of material on Accelerando – from Ellington to Henry Threadgill to Michael Jackson to Iyer's compositions – is dizzying, wonderfully so. Among Iyer's original compositions, "Optimism" starts with a buoyant feel, but its crescendo "means that it builds way beyond anything hinted at by the opening material," Iyer explains. "It erupts from the light to the visceral, and we have to push ourselves physically to achieve that." The album's title track was initially the final movement of a suite Iyer wrote for choreographer Karole Armitage that was performed in Central Park. "I'm interested in tempo as a structural element," he says, "and this was an experiment to see if a constantly accelerating pulse could be the basis for dance. Luckily it worked. It was an amazing experience to write something for dancers and see it realized."

One of the highlights of Accelerando is Iyer's ingenious version of Threadgill's "Little Pocket-Sized Demons." The kaleidoscopic original version included two tubas, two guitars and a French horn. "It took a leap of imagination," Iyer says. "The original has this carnival vibe – polyphonic and surreal. It was hard to express all that counterpoint with just six hands. We used arco bass to thicken up the sound and spread the beat to evoke the tubas. Thread came to a rehearsal and gave us pointers, which was so inspiring. Like Monk, Henry has this composer's approach, but he is also someone, like Monk, who played in the church. You can hear that communicative power when he plays."

The soulful Ellington piece "The Village of the Virgins" comes from his 1970 ballet The River. Reducing his orchestral sound to the trio format "involved sleight of hand," Iyer explains. "It both is and isn't the original." Herbie Nichols' "Wildflower" is "a tune I really love," Iyer says. "He was influenced by Duke and the stride pianists and by Stravinsky and Prokofiev. There is a lightness and elegance in spite of this harmonic darkness. It’s dissonant, but it makes you smile. It's inspiring when someone reconciles the seemingly irreconcilable." The album's version of the Michael Jackson ballad "Human Nature" is a trio extension of Iyer's solo piano arrangement heard on his 2009 album, Solo. "Interpreting a song like `Human Nature' is about telling your own story, like Miles did not long after the original," Iyer says. "That one or the Heatwave song or the Flying Lotus track were not obvious choices for a piano trio. But it's good for us to reach beyond ourselves to different musical approaches and even beyond our instruments. It leads to discovery – and that's the sound I really like."

Grammy-nominated composer-pianist VIJAY IYER was described by Pitchfork as "one of the most interesting and vital young pianists in jazz today," by The New Yorker as one of "today's most important pianists... extravagantly gifted... brilliantly eclectic," and by the Los Angeles Weekly as “a boundless and deeply important young star.” He was voted the 2010 Musician of the Year by the Jazz Journalists Association, and named one of the “50 Most Influential Global Indians” by GQ India. Iyer has released sixteen albums as a leader, most recently Accelerando (2012), an intense, visceral follow-up to the multiple-award-winning Historicity (2009), both featuring the Vijay Iyer Trio (Iyer, piano; Marcus Gilmore, drums; Stephan Crump, bass). Historicity was a 2010 Grammy Nominee for Best Instrumental Jazz Album, and was named #1 Jazz Album of the Year in The New York Times, The Los Angeles Times, the Chicago Tribune, the Detroit Metro Times, National Public Radio, PopMatters.com, the Village Voice Jazz Critics Poll, and the Downbeat International Critics Poll. The trio won the 2010 Echo Award (the "German Grammy") for best international ensemble and the Downbeat Critics Poll for rising star small ensemble of the year. Iyer’s many other honors include the Alpert Award in the Arts, the New York Foundation for the Arts Fellowship, the Greenfield Prize and numerous composer commissions.