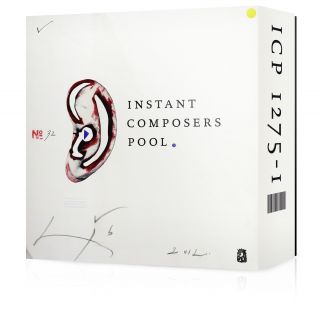 Catalog number: ICP 1275
Releasedate: 18-11-12
Complete boxed catalogue of the Instant Composers Pool, including some never before released material. The box contains 52 cd's and 2 dvd's, a photobook by Pieter Boersma and a blueprint of the famed ‘camel-chair’.
"Improvisation is like daily life... like crossing a street" - says Han Bennink. The ensemble of the Instant Composers Pool, or ICP, improvises for 45 years now on the highest level. "These guys can swing like madmen and then all of a sudden play the most sensitive ballads" according to trumpetplayer Dave Douglas.This is really an improvisational monster with ten heads! Furthermore co-founders Misha Mengelberg and Han Bennink are the true "Giants of European jazz"! ICP is historical, unique and there is nothing else like it in jazz.

The music that is released during all these years has now been collected and is planned to be released as a special edition box. It will contain 52 cd's, 2 dvd's (including bonus material that has never been released before), a blueprint of the famed ‘camel-chair’, and a photo-book of the rich ICP-history as shot by Pieter Boersma. Every box is numbered and unique because Han Bennink himself will be painting each copy by hand!

About the history of ICP:
In 1958, guitarist Jim Hall, in liner notes to a Jimmy Giuffre album, used the term “instant composition” to describe improvising. A few years later, Misha Mengelberg, knowing nothing of this, re-coined the term, and it stuck. A quiet manifesto, those two English words countered notions that improvising was either a lesser order of music-making than composing, or an art without a memory, existing only in the moment, unmindful of form. Misha's formulation posited improvisation as formal composition's equal (if not its superior, being faster).

Yes but: Misha says he was thinking of “instant coffee,” stuff any serious java drinker recognized as a sham substitute. He deflates his lofty idea even as he raises it. In the mid-1960s Mengelberg became involved with the Fluxus art movement, which he found inviting because it stood for nothing, had no ideals to defend. What bound together Fluxus's conceptualists, shock artists, early minimalists, musical comics et cetera was a need for a performance format that could accommodate them all. (Hence that symbol of '60s kookiness, the multimedia Happening.) Eventually he formed a band with that kind of flexibility: the modern ICP Orchestra.

ICP co-founders Mengelberg and drummer Han Bennink have played together since 1961; before long they’d played on Eric Dolphy’s 1964 Last Date and in a successful Dutch quartet, until they brought in the anarchistic young reed player Willem Breuker, whose disruptive presence tore the group apart. That was OK; Han and Misha liked musical confrontations. Mengelberg had studied composition at the Hague conservatory (alongside his friend Louis Andriessen); in his ’60s game piece “Hello Windyboys,” two wind quintets variously engage in call and response, communicate in musical code, interrupt or block each other, or seduce their rivals into cooperating. They did formally what ICP’s musicians now do informally.

Bennink, Breuker and Mengelberg founded the ICP co-op in 1967. In 1974 the saxophonist left to form the Willem Breuker Kollektief, longtime flagship of Dutch improvised music. Mengelberg (and Bennink) founded the raggedy ICP Tentet (including German saxophonist Peter Brötzmann, and sometimes cellist Tristan Honsinger). That band matured into something very like the present-day ICP Orchestra in the 1980s, with the addition of younger players, some of whom have been there ever since: trombonist Wolter Wierbos, saxophonists/clarinetists Michael Moore and Ab Baars, and bassist Ernst Glerum.

Misha Mengelberg (piano, composer) was a co-founder of the Instant Composers Pool, the nonprofit collective of Dutch composer-improvisers-instrumentalists, with Han Bennink and Willem Breuker in 1967. He has performed in duo with Han Bennink for more than 30 years and led the ICP Orchestra for more than 20. His other credits include performing and recording with Eric Dolphy, John Tchicai, Derek Bailey, Steve Lacy, Peter Brotzman, and many others.

Han Bennink (drums) is a co-founder of the ICP, long-time associate of Misha Mengelberg, and one of the most in-demand drummers in Europe. He has performed and recorded with jazz musicians such as Dexter Gordon and Sonny Rollins, as well as European improvisers such as Peter Brotzman, Derek Bailey, and Willem Breuker. He trained as a graphic artist and has exhibited work in several media, including sculptures from found objects that can include broken drum heads and drumsticks; he also designs many of his own LP and CD sleeves.

In addition to playing solo concerts and his own trio, Ab Baars (clarinet, tenorsax) is a regular guest with the EX, Cor Fuhler, Michael Moore, and Michiel Scheen. Since 1990, his main focus has been on the Ab Baars Trio, which led to tours with Steve Lacy and Roswell Rudd; a collaboration with the Nieuw Ensemble, shakuhachi player Iwamoto and conductor Butch Morris at the festival Improvisations. Baars has also worked with Francois Houle, John Carter, Roger Turner, Sunny Murray, George Lewis, Anthony Braxton, Cecil Taylor, and Gerry Hemingway among others.

Tobias Delius was born in Oxford, England but grew up playing tenor saxophone in Germany and Mexico. In 1984 he moved to Amsterdam where he studied briefly at the Sweelinck Conservatorium. Since 1990 Delius leads his own 4tet with Tristan Honsinger, Joe Williamson, and Han Bennink; APA INI is currently a quartet with Hilary Jeffery, Wilbert de Joode & Serigne Gueye. He can also be heard in Available Jelly, Sean Bergin’s MOB, Cor Fuhler’s Corkestra, and Georg Graewe Quintet. In 2004 Delius was awarded the Boy Edgar Prize, the Netherlands' most prestigious award in improvised music.

Born in New England, the cellist Tristan Honsinger studied at the Peabody Conservatory in Baltimore. By the '70s, the Trans-American had moved to Amsterdam. Since a memorable set of concerts in Berlin in 1988, released on the much sought-after FMP box set, Honsinger has been a fairly regular member of Cecil Taylor's groups, including the now-disbanded European Quartet with Harri Sjöström and Paul Lovens, including an unusual combination that performed at the Total Music Meeting in November 1999: the Cecil Taylor Ensemble with Franky Douglas, Tristan Honsinger and Andrew Cyrille.

Michael Moore was born in Arcata, California, where he played in clubs and attended school before moving to Boston to study at the New England Conservatory of Music. There he worked with Joseph Allard, Jaki Byard, Joe Maneri, Gunther Schuller, George Russell and others. After spending two years in NYC he moved to Amsterdam, where he has lived since 1984. He currently works with Available Jelly, Jewels & Binoculars, Franky Douglas, Achim Kaufmann, Dave Douglas, Fred Hersch, Benoit Delbecq, Eric Boeren, Paul Berner and others. His own projects include the White Widow Quartet, the Monitor Trio w/ Cor Fuhler and Tristan Honsinger and the Michael Moore Quintet.

Mary Oliver was born in La Jolla, California, and studied at San Francisco State University (Bachelor of Music), Mills College (MFA) and the University of California, San Diego where she received her PhD in 1993 for her research in the theory and practice of improvised music. Her work as a soloist encompasses both composed and improvised contemporary music; she has premiered works by Richard Barrett, John Cage, Chaya Czernowin, Morton Feldman, Brian Ferneyhough, George Lewis and Iannis Xenakis among others and worked alongside improvising musicians such as Ab Baars, FURT, Tristan Honsinger, Joelle Leandre, George Lewis, Phil Minton and Evan Parker.

Wolter Wierbos can be heard on more than 100 CD’s and LP’s. Like many Dutch brass players Wierbos started out in a ‘fanfare’ (brass band), switching from trumpet to trombone when he was 17. Since 1979 he has performed with with Henry Threadgill, The Ex, The Berlin Contemporary Jazz Orchestra (led by Alexander von Schlippenbach), the European Big Band (led by Cecil Taylor), Sonic Youth, the John Carter Project, Mingus Big Band (Epitaph, directed by Gunther Schuller) and many others. He is currently active with Gerry Hemingway Quintet, Franky Douglas’ Sunchild, Bik Bent Braam, Albrecht Maurer Trio Works, Nocando, Carl Ludwig Hübsch’s Longrun Development of the Universe, Frank Gratkowski Quartet, Available Jelly and Sean Bergin’s MOB.