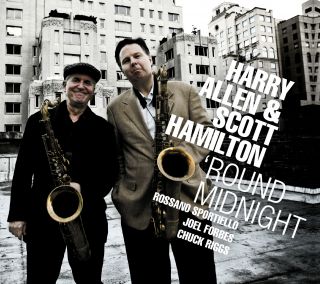 Scott Hamilton and Harry Allen first recorded together on the obscure Just You Just Me (put out by Japanese BMG) and in 2004 they joined forces for Heavy Juice (Concord). For their third joint recording, the two great tenors are joined by Harry’s regular rhythm section. “I love playing with them,” says Harry. “Wherever I go, no matter how famous the rhythm section is that I play with, I never feel that they are quite as good as my musicians. I have been playing with pianist Romano Sportiello for three years; he is one of the best. He always has such a great hookup with Chuck Riggs, a really swinging drummer, and bassist Joel Forbes who has such a great beat. They swing hard from the first moment.”

When listening to Harry Allen and Scott Hamilton jamming together, it is easy to think of the great tenor quintets of the past, particularly those of Al Cohn & Zoot Sims, Eddie “Lockjaw” Davis & Johnny Griffin, and Gene Ammons & Sonny Stitt. While the latter two teams were always very competitive, this Allen-Hamilton recording is perhaps most reminiscent of Al & Zoot in that the two tenors are very supportive of each other, they often seem to think as one, and they inspire each other to play at their best without being compelled to try to “cut” each other.


Scott Hamilton arrived on this planet first. Born Sept. 12, 1954 in Providence, Rhode Island, he could have been expected, as did many of his generation, to play rock, funk, fusion, or avant-garde jazz. But instead he embraced the music of the great musicians of the 1930s. While his original background was in blues bands, by 1976 when he moved to New York, Scott was a powerful tenor-saxophonist most influenced by Zoot Sims and Ben Webster but already displaying his own musical personality.

Scott’s arrival on the New York scene not only created a stir but was the official launch of a new way of thinking that resulted in the revival and revitalization of small group swing. Up until that point in time, the conventional wisdom in jazz thought of newer styles as being “replacements” for older ones as jazz raced at a rapid pace towards freedom, from New Orleans jazz  and music of the 1920s to swing, bop, cool jazz, hard bop, and free jazz with fusion extending the concept. Younger players were expected to embrace and push forward modern jazz, leaving the earlier styles (approaches developed more than five years earlier) for veterans who saw no reason to continually “modernize” their style, and for amateur revivalists. There were exceptions along the way, including Lu Watters and his San Francisco jazz of the 1940s, and cornetist Ruby Braff, clarinetist Bob Wilber and pianists Ralph Sutton and Dick Wellstood who kept classic jazz alive starting in the late 1940s/1950s. Those musicians did not merely copy the past but used earlier approaches as the springboards and inspirations for their own individual styles.

Scott Hamilton and cornetist Warren Vache made such a strong impact in the mid-1970s that soon other young world class musicians were exploring earlier styles, including guitarist Howard Alden, trombonist Dan Barrett, and Ken Peplowski (clarinet and tenor). Before the “Young Lions” movement led by Wynton Marsalis rose in the 1980s, these and other musicians had already led the way. It was no longer necessary for younger musicians to start off playing the most “modern” styles. They were free to pick any approach as long as they had the musicianship, enthusiasm and creativity to develop their own voices. Harry Allen, in speaking about his own music, could be talking about the giants who preceded him. “I don’t look upon my playing from the point of view of a specific style. I love Coleman Hawkins, Sonny Rollins, John Coltrane and many others. The sound that I like is the bigger and fatter sound that guys used in the 1940s, but I don’t necessarily play in their style. I just play myself.“

Born Oct. 12, 1966 in Washington D.C., Harry Allen began on tenor when he was 12. “When I first started playing saxophone,” remembers Harry, “a friend of my father’s, Richie Peters a great saxophonist, told me that I should get a Scott Hamilton record. Scott was my biggest inspiration for quite awhile. When I was 14, I went back and checked out the players who he was influenced by like Coleman Hawkins, Ben Webster, Illinois Jacquet and Flip Phillips.” Harry first met Scott when he was still in high school, seeing him play in Boston. After graduating from Rutgers in 1988, he moved to New York and made his recording debut. “Scott was playing all over town and he was kind enough to let me sit in with him. He was very supportive from the start.”

Since that time, Scott Hamilton and Harry Allen have had very busy careers, appearing on a countless number of bandstands, either with all-star groups or leading their own quartets. While Scott spent a period living in England and currently resides in Italy, Harry is based in New York. “We manage to do a few gigs together each year and sometimes we do a tour together,” says Harry. “I’ll always play with Scott, anytime, anywhere. Just to stand next to him and listen to him play is great fun. We have a pretty good blend together and it is always a great experience.”