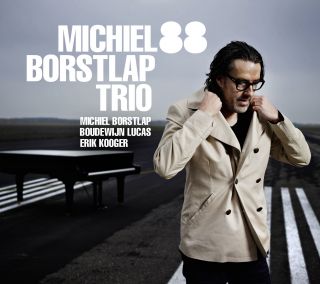 Catalog number: CR 73350
Releasedate: 31-05-12
Dutch pianist-keyboardist Michiel Borstlap, one of today’s jazz greats, is creative and versatile on the accessible 88.
The take-no-prisoners approach of the opening track seems to convey only one message: make no mistake, the jazz piano trio is still alive and… kicking ass. The song, the exuberant Latin Cherish your Sunshine, is characterized by a mercurial melody that slithers, full of catch-me-if-you-can bravura, along the bar-lines. When, in the ‘tutti’, the theme is finally caught by the expertly chasing rhythm section, the listener cannot feel anything but joy. It’s the same joy that the Michiel Borstlap Trio - Boudewijn Lucas: electric bass, Erik Kooger: Drums - experienced whilst recording the album.

“Some people claim that the jazz piano trio format has been squeezed dry. We most certainly do not agree with that misconception, and that’s what 88 is all about.”
Being asked if there is, apart from the ‘keeping-the-trio-alive attitude’, a concept underpinning the lush musical structures of his latest album, Borstlap figures the title 88 says it all. The pianist is still in thrall of the grand old lady’s ebony and ivory touch. “88 refers to the number of keys on a full scale piano, so you might say the concept is the piano itself. I’m still mesmerized by its possibilities in the broadest sense.”

Standing, literally and figuratively, tall between his peers Michiel Borstlap epitomizes modern Dutch jazz piano. On this recording he even ventures beyond the restrictions of the grand piano by reintroducing the Fender Rhodes electric piano, an instrument Borstlap hasn’t been heard on for quite a while.

So all of you who still think the piano trio is helplessly passé: take a load of this. 88 might just be the thing you’re looking for! (from the linernotes, written by Ruud Meyer)


The music of pianist/composer Michiel Borstlap has been described as lyrical, classical, ambient, contemporary and above all touching.

Borstlap himself is a classically trained musician. His family history includes his great-uncle who was a famous choir conductor, his father who is a composer, his mother who plays classical piano and sister who plays both piano & violin.

Born in The Hague (1966), the pianist and composer Michiel Borstlap trained at the Conservatory in Hilversum, and in the many clubs and festivals he played from a very young age.

Borstlap’s music began to acquire its own character towards the end of the 1990’s, as he changed elements descend from jazz and blues music. Around this time he won several international awards, most notably the Thelonious Monk/BMI Composers Award in the US. His winning composition was recorded by Herbie Hancock & Wayne Shorter on their official release 1+1 (Verve/Universal). In 2001 Universal released his album Gramercy Park, featuring his rendition to Chopin's first Scherzo.  Opera Avicenna, commissioned by the Emir of Qatar (2003), was a turning point in Michiel Borstlap’s career – his first real work as a composer. A three hour opus magnum which had to be composed in less than one month. The worldpremieres in the capital were a success and billed as the world's first Opera about the arabic culture.

In 2008 Michiel Borstlap composed his first soundtrack for the Dutch movie ‘Tiramisu’. The score received a Golden Calf, the grand prize of dutch film industry.

Throughout the years Michiel Borstlap had the honor to perform with such great artists such as Pat Metheny, Bill Bruford, Janine Jansen, Les Paul, Jeff Tain Watts, and Peter Erskine. He also performed extensively with great popsingers like Gino Vannelli, Trijntje Oosterhuis & Edsilia Rombley, and performed as soloist with the Metropole Orchestra.

The album meant a new realization. ‘After playing with many incredible artists, the solo stage was like coming home. My love for the piano is very strong, and a need to communicate strong emotional feelings developed. For the album Blue (Songs from Father to Daughter)  I composed truly songs, with a more pop/folk structure. I always loved the great songs which the pop & folk music gave us'.

With the new trio album "88" Borstlap shows us that the jazz piano trio is alive and kicking!