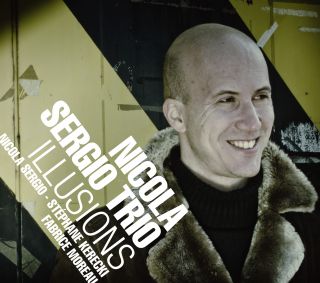 Catalog number: CR 73351
Releasedate: 18-10-12
"This work is dedicated to “iIllusions”, without them “dreams” could not exist!" - Nicola Sergio. With Nicola Sergio, as a composer as well as a pianist, jazz is a vibrant musical genre and has no specific boundaries. With the talent, the deep musicality and the ‘alive-ness’ of his music, Nicola Sergio has become an important name to remember!
“Nicola Sergio is a melodist. Not one related to the traditional clichés of an Italy which gave birth to the Bel Canto, or one whose melodic construction prevails due to a lack of language or knowledge. Nicola Sergio is endowed with an exceptional melodic sense ; his inner chant immediately makes his music familiar : his music is true, without ostentation, raised by two fellow musicians ranked among the most talented French jazzmen. Performing also Franz Schubert and Kenny Wheeler – two fabulous melody composers in their own respective style – Nicola Sergio trio signs a manifest of delicacy and whisper, like so many odes to dreams and enchantment.” (From the linernotes- written by Jean Charles Richard)

Sergio also completed the ‘Prix Jazz’ at the CNR in Paris, the city in which he has resided since 2008.  From an early age, the Italian musician’s talents were evident, helping him to earn various mentions of honour at numerous competitions and classical music festivals for young performers. Between 2004 and 2007 he played in a variety of groups in the jazz scene, from trio to quartet, quintet, sextet and Cuban music ensembles. These were all groups with which he performed on numerous festivals in Italy, France and Sweden. As Well as his activities in the jazz circuit, he became involved in projects of related genres in music, such as classical chamber music, film, theatre scores and he conducted big bands.

Currently, he is leader of a Paris-based trio bearing his own name, which includes two special guests on saxophone, New Yorker Michael Rosen and Argentine Javier Girotto, and cellist Melanie Badal. With this project he recorded the CD entitled ‘SYMBOLS’, for independent label Challenge Records International. His compositions have already generated interest at many radio stations in France as well as in Italy.

In addition, Nicola Sergio recently recorded a documentary and a CD with a quartet, as pianist/arranger/composer. This was for the project entitled ‘Cilea Mon Amour’, a re-visitation in the style of jazz of the principal operas by composer Francesco Cilea. This was released on the new label Nau Jazz.

The particular characteristic of the Nicola Sergio Trio on the cd ‘Symbols’ can be found in its conceptual framework: the fundamental idea is that of developing a way of interpreting jazz which is not limited to the passive acceptance of any preliminary design. Rather, the modus operandi of the project is to explore modernism and multiculturalism. The first part of this explorative process consists of the use of non-traditional structures and harmonic  progressions. The multicultural element arises from the fact that the creative influences from which the themes find their roots, are not limited to any one region, culture, style or epoch.

With Nicola Sergio, as a composer as well as a pianist, jazz is a vibrant musical genre and has no specific boundaries. With the talent, the deep musicality and the ‘alive-ness’ of his music, Nicola Sergio will become an important name to remember.