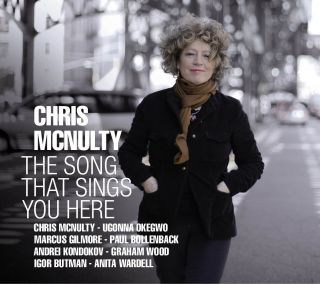 The Song That Sings You Here

Catalog number: CR 73341
Releasedate: 06-10-12
Chris McNulty has been moving audiences since her emergence on the international jazz scene in 1985. With a touch of Sarah, a hint of Ella, and a whole lot of vibe, McNulty is blessed with an exquisite instrument.
“This recording, the tune selections, my two compositions and the treatment concept, all took place before my beautiful beloved and cherished son, Sam departed this world (July 16th, 2011). Nothing has been changed or altered in any way. My composition “Long Road Home - The Song that Sings you Here” was completed in 2008. The title for this recording was chosen in 2010. As I listen back now, it strikes me that much of this album sounds like it was conceived after Sam left us. I have no explanation for this except to say that every song I sing, I sing for him. I sing him here, always.”

A rich, expressive voice soaked in swing and blues. An ability to improvise that’s straight from the heart. Wonderfully expressive, demonstrating soaring confidence. Her intonation and articulation are commanding. Liquid phrasing, luminous tone, a voice of serene beauty and striking veracity.

Chris McNulty has been moving audiences since her emergence on the international jazz scene in 1985. With a touch of Sarah, a hint of Ella, and a whole lot of vibe, McNulty is blessed with an exquisite instrument. She combines a rich, expressive voice with a deep sense of swing, a natural feel for the blues and an impressive ability to improvise that comes straight from the heart.

She has been hailed by critics in the US as an immense talent whose vocalizing is fearless and composing peerless (Jazz Times, USA, Jan 2007), and a rare find among jazz singers. In the UK she has been hailed as one of the foremost vocalist-composers on the international jazz scene with a voice of serene beauty, striking veracity and compelling emotional fervency (Jazz Wise, UK, Jan 2007), and in her native Australia, as a superb jazz vocalist (West Australian, May 2005) who melds the sounds of jazz, blues, pop and funk into an intensely musical style with a highly professional delivery.

On recordings and in live performance, she spontaneously reconstructs melodies while retaining the essence of the original lyrics. Her repertoire ranges from classic Gershwin and Porter standards to Miles Davis classics and Burt Bacharach chestnuts with an ever increasing focus on her original compositions and lyrics.

Increasingly acknowledged by musicians, peers and critics alike as a jazz vocalist-composer with a unique vision, boundless creative energy and a distinctive style of her own. McNulty's risk-taking, fluid and powerful emotional approach, support, but never compromise her musical sensibilities. As both vocalist and composer, McNulty breaks new ground by simultaneously reinforcing and re-defining the boundaries for jazz vocals. In short, she is a consummate musician with great pitch and control "capable of injecting emotion, pathos, irony & meaning into her work, a gift that few singers can lay claim to.” (George Carroll, The Musicians Ombudsman, Aug 2006). Her compositions have been hailed as rich harmonically, melodically and lyrically and well worthy of the company they keep along side the great standards she continues to interpret and explore.