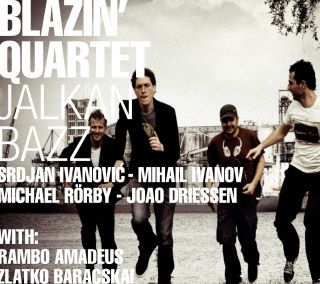 Blazin' Quartet takes regard of no musical borders. They mix everything they like and feels good in order to take the listeners to a trip in their own world. Just like being on a market on which you can find everything from dates to cheap electronics.

Their diverse european background (Balkan, Scandinavia, West-europe) mixes in with their mutual language of Jazz and while the music relies on melody, rhythm and interplay, the absence of a chord instrument gives enough space for electronic sounds and loops.

In short time of existance they have been awarded the Dutch Jazz Competition, the Holland Casino Jazz&Pop Award and have performed in The Netherlands, Serbia, Greece, France, Montenegro, Croatia, Thailand and Brazil at festivals such as North Sea Jazz (2008, 2009, 2010), Novi Sad Jazz, Kalamata Jazz, Samui Jazz, Jazz Na Fabrica and at numerous clubs and venues.

Srdjan Ivanovic
Born on the 8 of September 1983 in Sarajevo.
After moving to Athens, Greece in 1992 he starts playing the drums at the age of 13 and studies with the Greek drummer George Polychronakos. In 2003 he left for Holland, Amsterdam, where he studied at the Conservatorium van Amsterdam with Marcel Serierse, Martijn Vink, Lucas van Merwijk and Gergard Jeltes and earned his bachelor diploma in 2007.
As a percussionist he was awarded twice the first prize and once the second prize in 3 consecutive years at the 'Hellenic Traditional Music Competition'. Srdjan has performed live in Greece, Holland, Serbia, Bosnia, Italy, Poland, Egypt etc.and played and recorded with many of the best musicians in Greece and in Holland (Yotis Kiourtsoglou, David Lynch, Dimitris Tsakas, Giorgos Palamiotis, Harris Lambrakis, Dimos Dimitriadis, Mark van der Feen, Paul van der Feen, Slobodan Trkulja a.o.) and played with band such as Levantina, Makrina Ksaderfia, Giorgos Palamiotis Band, Georgia Velivasaki Band a.o.

Besides having played with Amsterdam based bands like 'Mariandoro' and the 'Branko Galoic Band', he has been the creator of bands: 'Trans Atlantic Conspiracy Troupe', 'Global Meltdown Band' that performed mainly his music and the co-creator of Official Language a jazz band with non standard sound. In 2007 Srdjan started the band Blazin' Quartet, with which he entered the Dutch Jazz Competition. In the short time of existance they have been awarded the Dutch Jazz Competition, the Holland Casino Jazz&Pop Award and have performed in The Netherlands, Serbia, Greece, France, Montenegro, Croatia, Thailand and Brazil at festivals such as North Sea Jazz (2008, 2009, 2010), Novi Sad Jazz, Kalamata Jazz, Samui Jazz, Jazz Na Fabrica and at numerous clubs and venues.
BQ took part in the Young VIPs tour 2009, a 10 concert tour in some of the best dutch venues.

Srdjan is momentarily living in Amsterdam

Joao Driessen
Currently living in Amsterdam, my more recent work is with the Blazin' Quartet, Benoit Martiny Band, Felix Schlarmann Group and the Amsterdam Jazz Orchestra. you can find more detailed information about these bands by clicking the links or navigating to the Projects section.Joao Driessen has been part of the dutch music scene since 2003. Born in Amsterdam, and growing up in London, Joao has lived the majority of his life in London (England) where he has had the opportunity to develop as a young musician playing the Violin, Piano and later his principal instrument the Saxophone. In London he began as a young violin player when at age 16, not fully satisfied with the violin, Joao found himself drawn to the Saxophone. At the age of 18 he moved to Amsterdam to study Jazz at the Conservatorium van Amsterdam. It is during this time that he has gained experience and a reputation as a formidable saxophonist.

Michael Rörby, trombonist, originally from Stockholm, Sweden, grew up in a house full of music, being the third son of guitarist & lutenist Jörgen Rörby, and the grandson of priest, organist & conductor Ingvar Sahlin.
At an early age he studied piano and trumpet but it wasn't until he was 19 that he picked up the trombone which soon became his main means of expression. In 2001 he moved to The Netherlands, where he got introduced to the scene with the generous help of his friend, trumpetist Philip Harper. In present time he commutes between Amsterdam, Paris and Berlin, where he works with different groups and artists, mainly as a soloist. As a touring musician he has performed on music festivals and in clubs on 5 continents. In The Netherlands he has played The North Sea Jazz Festival, annually, for the last 10 years.
As a leader he is to be seen with Michael Rörby Quartet, Michael Rörby Quintet and the co-led Blazin' Quartet, which he also composes for.