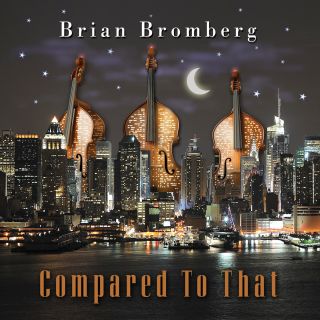 Catalog number: ART 7028
Releasedate: 22-05-12
“I’m one of the lucky ones,” says the musician as he barrels down a desolate desert highway accompanied by a massive 300-year-old acoustic bass. Together, they had embarked on a three-week road trip traversing the country beginning in Southern California en route to Reading PA, then on to Nashville TN, returning through his hometown of Tucson AZ and finishing in the San Fernando Valley outside of Los Angeles. During the trip, Grammy® nominated bassist Brian Bromberg played a handful of shows, including a preview performance featuring music from his new Compared To That album at the annual Boscov’s Berks Jazz Festival in Reading before heading south to teach a master’s class in Nashville. And since he was road tripping, Bromberg figured that he would visit his mother for Passover. His vehicle contained several piccolo and electric basses along with assorted amps, but the reason for the cross- country drive instead of flying was the irreplaceable acoustic instrument.

“Last year, one of the airlines dropped it and it cost a fortune to repair. I can’t take any more chances with it,” he explains. “Besides, it was a great trip. I enjoyed taking the time to see the country like this. It’s a really exciting time in my career.” Indeed Bromberg does imbibe rarified air. The purpose of our conversation is to discuss his three uniquely different, artistically divergent albums slated for release this summer: Compared To That, Bromberg Plays Hendrix and In The Spirit of Jobim. But he also oozes enthusiasm for a labor of love project: the launch of the world’s first online radio station for bass players, bassonthebroadband.com.

“Most bass players will never get airplay or a record deal and I’ve been blessed to always have both. bassonthebroadband.com is about the instrument. It’s an enormous undertaking, but nothing like it exists for bass players. They don’t have any outlets exclusively devoted to playing the music of bassists, which blew me away; thus we’re building it from the ground up. We’ll air music and video clips featuring the greatest bassists in the world in all genres of music, including submissions from all over the world from amateurs. I’ve been talking to some prominent bass players about hosting a show on the station and potential sponsors about sponsorship. It’s all very exciting and I’m certain we can grow the station and the site while generating revenue. But for me, it’s primarily about creating opportunities for bass players to be heard.”