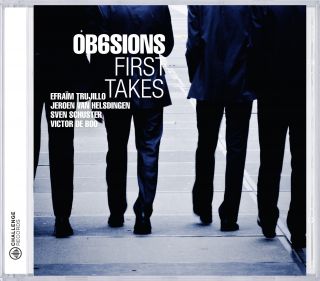 Catalog number: CR 73346
Releasedate: 14-06-12
On this CD you hear mainly own compositions and some standards, all recorded live on Radio 6 Soul & Jazz. It is a very uplifting album with the first takes the Ob6sions played on the radio now immortalized on CD!’
“About two and a half years ago I approached drummer Victor de Boo since we were going to start a new program with live music for Radio 6 Soul & Jazz. For ‘Mijke’s Middag Live’ I was looking for a band that would play every week in the program, ‘De Huisband’. No easy task, because I was looking for musicians that could play jazz and soul, who knew their standards, could build their own repertoire, but also could accompany guests: from young talents to the biggest international stars.

Victor de Boo searched and found: bassist and arranger Sven Schuster, whose compositions have a large influence on the repertoire of The Ob6sions, saxophonist Efraïm Trujillo who blows the bottom out of his horn in each solo and Jeroen van Helsdingen who conjures a variety of sounds from his keyboard. And of course The Boo himself, who plays the drums authentically and with a great drive.

On this CD you hear mainly own compositions and some standards, all recorded live on Radio 6 Soul & Jazz. It is a very uplifting album with the first takes the Ob6sions played on the radio now immortalized on CD!’ (from the linernotes by Robert Soomer, Producer NTR Radio 6)

Efraïm Trujillo was born in Lynwood, California.
He started playing the clarinet at the age of nine but later fell in love with the saxophone. Since 1980, Efraïm has been living in Amsterdam where he studied at the 'Sweelinck' conservatory with
Tim Armacost and Jan Menu. He received his U.M. (uitvoerend musicus) degree in 1994. The 'Fonds v/d Scheppende Toonkunst' granted Efraïm Trujillo in 1995 - 98 and 2001 - 2006 a
'compositie-opdracht' and in 2002 a 'stupendium'. His compositions are released on numerous CD's. With 'New Cool Collective' he recorded the Edison rewarded cd 'Big'. The latest CD of The Ploctones '050' is nominated for the Edison Award 2009.

Efraïm Trujillo has played in The Netherlands at all major jazz-venues with among others; The Ploctones, Fra Fra Sound and New Cool Collective Big Band, he also toured in the US, Jamaica, Tunis, Malta, Cuba, Senegal, Ghana and South-Africa. Furthermore he collaborated and recorded with; Benny Bailey, Toumani Diabate, Bootsy Collins, Lester Bowie and David Murray. Efraïm is a passioned teacher.
He is giving workshops around the world

Sven Schuster [1965 ] is born in Wolfsburg Germany and played with 16 doublebass in the Big Band of the music school [the conductor was Lothar Krist with special guests like Herb Geller], the youth orchestra and small bands. 1984 he moved to Austria to study double bass with Wayne Darling at the university in Graz. There he was playing with a lot of good musicians like: Harry Sokal , Wolfgang Muthspiel, Alan Praskin, Bill Elgart, Roberto di Gioia, Wolfgang Haffner and Mel Lewis. In 1988 Schuster moved to Holland were he got his degree at the conservatory in Hilversum in 1991. During that time he was working frequently with the legendary gitarplayer Wim Overgaauw in his trio accompanying guestsoloists like Ferdinand Povel, Ack van Rooyen, Bart van Uer, Rob Madna, Eef Albers and Han Bennink. In 1991 the Middlesee Jazztreffen in Leeuwarden Holland gave him the award " best soloist". In the Netherlands the bassplayer can be recognised from CD recordings and concerts with: Dirk Balthaus, Steve Altenberg, Mike del Ferro, Lydia van Dam, John Engels, Ricky Margitza, Dale Barlow and Jim Hall, as well as touring throughout Europe, Africa , Jamaica and the U.S.A. In 1999 the Sven Schuster Quartet released their first CD " Three is a crowd ". The Dutch newspaper " De Volkskrant " wrote about the CD: Schuster himself a convincing soloist too, warm and melodic; his bowed lament in Mingus' Goodbye Pork Pie Hat with Hendrix like screaming is courageous and moving.