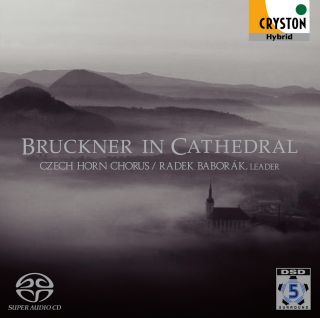 In 2000 Baborak became the principal hornist in the Berliner Philharmoniker with whom he, for instance, played as a soloist at the Salzburg Easter Festival (Britten Serenade, Sir Simon R by Ian Bostrige – later released on EMI Classics by the way). Then followed their performances at Prague’s famous Estate Theatre (May Day concert with Mozart’s Barenboim) and of course, at the Berlin Philharmoniker’s concert hall – Konzertstück for 4 horns by Schumann and with conductor Dmitrij Kitajenko the Horn Concerto by Reinhold Gliere to name just some highlits. Baborak then also used to be a member of the Berliner Wind Soloists and the Berliner Horn Octet. As a soloist performs with the Berliner Baroque Orchestra.

It was prof. Karel Krenek under whose leadership an eight year old Radek started to play horn in his hometown Pardubice (then still in communist Czechoslovakia) and who led him to winning all national competions. At the age of 12 Radek became an absolute winner of Concertino Praga (1989).

From 1989 thru 1994 Baborak continued his studies at The Prague Conservatory with a renowned Czech hornist, prof. Bedrich Tylsar. In 1992 Radek ended up 3rd at the annual Prague Spring festival’s competition and was also awarded with the Unesco’s Grand Prix as well as many other international prizes which included, 2nd prize in Geneva (1993), 1st prize at the ARD Munich Competition (1994) and with Afflatus Quintet (1997), Classical Grammy Award (1995) or Davidoff Prix (2000).

Since 1996 he is a key member of the Afflatus Quintet which he won his second ARD prize with, and while having his own Radek Baborak Ensemble (consisting of the horn and a string quartet), in 2008 he also founded the Czech Horn Chorus – in order to keep up with the traditional, as long as 300 years acclaimed Czech horn school. He also plays duo with Yoko Kikuchi-piano, Jana Boušková-harp, Jiří Bárta-cello,…

Before he became principal hornist of The Berliner Philharmoniker in 2000, Baborak already retired from the principal horn in The Munich Philharmonic Orchestra (1996–2000) to be given an exclusive contract with the Bamberg Symphony (2000 –2003). And not to forget Radek’s astonishing career’s beginning, at the age of his 18, without a due for auditioning which is normally compulsory, he was already offered a principal position with the famous Czech Philharmonic Orchestra, Prague (1994–1996).

But as Baborak points out himself, “Every branch will show whether one just gave it a few hours since childhood or if it also merged with a talent. I am so thankful for the talent I was gifted and I am so much grateful for the guidance I was lucky to get. Without any of the two you can never reach certain level,” he remembers his teachers, esp. Karel Krenek and Bedrich Tylsar.

Nowadays, after the 10 years with The Berliner Philharmoniker, Radek Baborak maintains performing as a horn soloist with the world’s leading philharmonic orchestras or alone in self directed recitals... But he is also a keen chamber music performer and interpreter. Since 1996 he is a key member of the Afflatus Quintet which he won his second ARD prize with, and while having his own Radek Baborak Ensemble (consisting of the horn and a string quartet), in 2008 he also founded the Czech Horn Chorus – in order to keep up with the traditional, as long as 300 years acclaimed Czech horn school.

In 2010, after departing the Beliner Philharmoniker, he founded and put together another body – this time The Czech Sinfonietta. Radek Baborak is its artistic leader and a conductor and it consists of the most distinct Czech soloists and chamber music specialists. Jako Docent působil v nadaci Artur Toscanini, hostující Prof. TOHO University Tokyo, Reina Sofia Music school Madrid. Now, he is teaching in AMU.