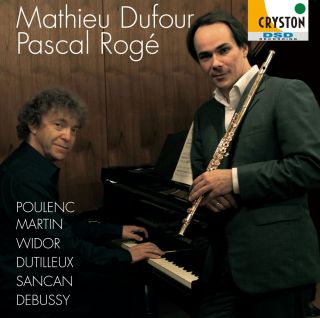 Catalog number: OVCC 82
Releasedate: 03-08-12
This CD is French music collection of flute and piano duo, the instrumentation of which has such a rich culture of repertoire in that country especially in 20th century. The best interpretation, by Mathieu Dufour on flute and Pascal Roge on piano, can be heard here for all the pieces of central importance in this genre.

With his  golden sound and flawless technique have left audiences and fellow musicians in awe: flutist Mathieu Dufour.he was appointed principal flute of the Chicago Symphony Orchestra by Daniel Barenboim, making him one of the youngest players ever to hold such a position.Here he plays a French music collection of flute and piano duo, with Pascal Roge on piano. Pascal Rogé exemplifies the finest in French pianist; his playing is characterised by its elegance, beauty and delicate phrasing – his name is simply synonymous with the best playing of French repertory in the world today. This fine French selection of music is in the best hands with these two extraordinary musicians!

Mathieu Dufour (flute)
Praised as “a marvel” by the Chicago Sun-Times, French flutist Mathieu Dufour is one of the most enchanting and breathtaking musicians of his generation. His golden sound and flawless technique have left audiences and fellow musicians in awe.At the age of 25, he was appointed principal flute of the Chicago Symphony Orchestra by Daniel Barenboim, making him one of the youngest players ever to hold such a position. Since then, he has performed numerous times as soloist with the Chicago Symphony, in the concertos of Devienne, Mozart, Ibert, Bach, Jolivet, and Nielsen. Under the direction of Daniel Barenboim, his performances of Mozart’s G major concerto in at Carnegie Hall in New York and the Bach’s Second Suite at the Philharmonie in Berlin earned him rave reviews. He has performed as soloist at the Lucerne Festival in Switzerland; one critic wrote of a performance, “the ornate solo lines unfurled like yard upon yard of fine embroidered silk.”
As soloist, Mr. Dufour has performed with conductors such as Pierre Boulez, Christoph Eschenbach, David Robertson, Fabio Luisi and Nicholas McGegan. Of a recent performance of Nielsen’s Flute Concerto with the Chicago Symphony, the Chicago Tribune wrote, “Throughout the concerto he confirmed his uncanny mastery of color and dynamics, filling the hall with a vibrant, crystalline sound.”
Mr. Dufour performs concertos and recitals every year in Japan. He has performed recitals in major halls in Tokyo and concertos with the Tokyo Metropolitan Orchestra and the Hiroshima Symphony.
As chamber musician, he has collaborated with Mitsuko Uchida, Pinchas Zukerman, the Kalichstein-Laredo-Robinson Trio, Julia Fischer, Eric LeSage, and members of the Berlin Philharmonic. He is also a member of the Chicago Chamber Musicians. He has performed chamber music concerts in Carnegie’s Zankel Hall in New York and at the Lucerne Festival, the Davos Festival in Switzerland, and the Domaine Forget Festival in Canada. He is in demand around the world as a recitalist and has dazzled audiences in Japan, the United States, Canada, Europe, Israel, and South America. His recitals have been televised on the Mezzo French channel and on Japanese television.
Mr. Dufour was born in Paris, and he began his flute studies with Madeleine Chassang. He then studied with Maxence Larrieu at the Lyon Conservatory, where he was unanimously awarded first prize. He won second prize at the Jean-Pierre Rampal International Flute Competition in 1990, third prize at the International Flute Competition in Budapest in 1991, and second prize at the International Flute Competition in Kobe, Japan, in 1997. At the age of 20, he was appointed principal flutist of the Orchestre National du Capitole de Toulouse, and three years later he became the principal flutist of the Paris National Opera. He was also a member of the Juventus Foundation.
Mr. Dufour is also highly in demand as a teacher, although his concertizing permits him time for very few students each year. He is passionate about teaching the young generation of musicians, frequently giving master classes wherever he performs. He has taught many times at the Domaine Forget Festival in Canada. He is currently on faculty at DePaul University in Chicago.
In 2009-2010, Mr. Dufour performs Dalbavie’s Flute Concerto with the Chicago Symphony in Chicago and at Carnegie Hall under the direction of Pierre Boulez.
Mr. Dufour’s discography includes a solo recital of sonatas by Prokofiev, Martinů, and Hindemith on Harmonia Mundi; Poulenc’s complete chamber music on RCA/BMG; the complete works for flute by Roussel on Saphir Records; and Molique’s concerto with the Czech National Orchestra on Cedille Records. In 2010 he releases a CD of fantasies for flute and piano by Taffanel, Fauré, Doppler, Hüe, Gaubert, and Borne on Cedille Records.

Pascal Rogé, (piano)
Pascal Rogé exemplifies the finest in French pianism; his playing of Poulenc, Satie, Fauré, Saint-Saëns or Ravel in particular is characterised by its elegance, beauty and delicate phrasing – his name is simply synonymous with the best playing of French repertory in the world today.
Born in Paris, Pascal Rogé became an exclusive Decca recording artist at the age of 17. He has won many prestigious awards including two Gramophone Awards, a Grand Prix du Disque and an Edison Award for his interpretations of the Ravel and Saint-Saens concertos. Other recordings include the complete piano works of Poulenc and Ravel, four albums of Satie and two of Debussy and a Bartok cycle with the London Symphony Orchestra. For the Poulenc Edition in 1999 Mr Rogé recorded both piano concertos, the Aubade and the Concerto Champêtre all under Charles Dutoit.
For Oehms Classics Mr Rogé recorded, to unanimous acclaim, the Ravel G Major and Gershwin concertos with the Vienna Radio Symphony Orchestra under Bertrand de Billy and has now recorded a second disc with the same forces which includes the Ravel Left Hand Piano Concerto, Rhapsody in Blue and An American in Paris. Pascal Rogé’s latest recording project is the Rogé Edition, released on the Onyx Classics label. The first CD release in May 2005 inaugurated his first complete Debussy cycle with the Préludes and was followed by a second disc including Estampes and Children’s Corner early in 2007. In March 2008 the third volume was released containing Images and Pour le Piano. Also for Onyx he has released a disc of Mozart concertos with the Indianapolis Symphony Orchestra conducted by Raymond Leppard.
Pascal Rogé has performed in almost every major concert hall in the world. Some of the orchestras he has appeared with include the Philadelphia Orchestra, the Montreal Symphony, L’Orchestre de Paris, L’Orchestre National de Radio France, the Royal Concertgebouw Orchestra Amsterdam, the NHK Symphony Orchestra Tokyo, the Vienna Symphony Orchestra, L'Orchestre de la Suisse Romande, Leipzig Gewandhaus and all the major London orchestras.
He appears regularly in the United States and is a frequent guest artist in Australia, New Zealand, Latin America and especially Japan. Among his recent British engagements are recitals at Wigmore Hall, Symphony Hall Birmingham and the Queen Elizabeth Hall where he is a frequent guest of the International Piano Series.
Pascal Rogé was for two years the Artistic Director of Incontri in Terra di Siena, a summer festival that takes place each year in Tuscany. He is enjoying playing recitals of music for four hands/one piano with his wife, the pianist Ami Rogé.