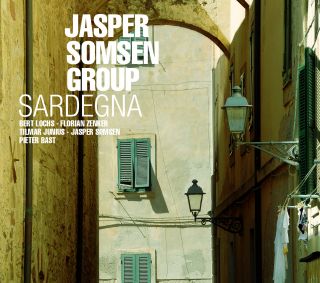 Catalog number: CR 73361
Releasedate: 31-01-13
The quintet’s second CD, Sardegna, is dedicated to the island of Sardinia. The 11 selections, nine by Somsen, one from Lochs, and a group improvisation (“Cala Luna”), cover a wide range of musical ground.
Jasper Somsen, a talented jazz bassist and composer from the Netherlands, has worked with Enrico Pieranunzi, Ferdinand Povel, Rita Reys and Nancy Marano among others, performing regularly throughout Europe. He put together his current quintet in 2009. The Jasper Somsen Group consists of Bert Lochs on trumpet and flugelhorn, guitarist Florian Zenker, pianist Tilmar Junius, and drummer Pieter Bast plus the leader. They recorded their debut Dreams, Thoughts and Poetry a few years ago for the Challenge label.

The quintet’s second CD, Sardegna, is dedicated to the island of Sardinia. The 11 selections, nine by Somsen, one from Lochs, and a group improvisation (“Cala Luna”), cover a wide range of musical ground. The first two numbers, “Mia Nefertiti” (which is in 5/4 time) and “Sardegna,” are rhythmically tricky although the musicians sound effortless during the ensembles and the solos. Other selections include haunting ballads that are quietly emotional and a bit reminiscent of an ECM recording (the touching “The Loss Of Innocence,” and “Lost And Found”), a couple of brief bass solos that act as transitions between pieces, the atmospheric “Cala Luna,” and a trio of hotter upbeat pieces (“Lotus,” “One For Paolo” and “And They All Disappeared”) that bring out the best in the soloists. Lochs (who occasionally recalls Kenny Wheeler), Zenker, and Junius all take thoughtful and meaningful solos, drummer Bast displays versatility, and Jasper Somsen makes every note count.

Sardegna is a fine sampling of high-quality and inventive modern jazz.


SARDEGNA is a profound personal narrative about the way the course of life changes. The short stories on this album are about the search for the meaning of life, the loss of dear ones, love, friendship and songs that are just songs, because they are … just songs.

Track 8 "One for Paolo" is dedicated to the Sardinian trumpet player and composer Paolo Fresu:

What connects The Netherlands and Sardinia, Italy? And what connects Jasper Somsen, his poetic music and this fascinating Mediterranean island?

"For Jasper, I assume, this connection is based more on an emotional and personal level. But, we can also connect The Netherlands and Sardinia from a different perspective, by drawing together people and personal narratives, from the past and present, using the universal language of the arts. Some of the Sardinian names, as stated in this booklet, are musicians who moved to Amsterdam and The Hague, in order to gain more recognition – which is hard won in Italy. Being stubborn, obstinate and headstrong (a typical Sardinian mentality) they are firm in wishing to embed the ancient and rich Sardinian musical tradition into other musical traditions. In doing so these musicians affirm that Sardinia is continuously in touch with the rest of the world and not just a somewhat remote island in the Mediterranean Sea. They treasure the still vivid ancient traditions of the “Mare Nostrum” - the origin of all Western civilization.

For contemporary jazz musicians it is a natural process to head forward and to leave the Sardinian traditions behind, in order to develop a personal musical language. Often cultural heritage, nostalgia and new open forms of expression collide within our music. Although not impossible, it is odd that a jazz musician from abroad dedicates an album to our island. However, if it is true that music is a universal language, then for certain there are many ways to comprehend and express it.

Contrary to a more philological or didactic approach, this album is merely a reference to the rhythm of life on our island – which can be heard in some of the eleven original compositions. In particular, the title track “Sardegna” refers to a traditional Sardinian dance (Ballo Sardo) introduced by an ostinato rhythmic pattern, played by the drums. “Cala Luna” is a soundscape which expresses the sandy beaches and a calm sea at sunset. The first composition mentioned represents the element earth, the second: water - both elements so deeply connected within the Sardinian soul and representative of the ever complex relationship between the island and the mainland.

The other compositions do not only refer to Sardinia itself, but are much more connected to the vast history of European and American jazz, and maybe to another island yet to be discovered… An island created by passion, imagination and poetry. Akin to other migrants to Sardinia, exploring our island, so also does Jasper by releasing this album: being able to create new memories and to whisper new destinations in our ears."

Jasper Somsen (1973) studied Jazz and Classical double bass at the conservatories of Utrecht and Amsterdam, The Netherlands.

With the Jasper Somsen Group he released the highly acclaimed album: "Dreams, Thoughts & Poetry" (The Music of Enrico Pieranunzi). In January 2013  they released their second CD “Sardegna”.

He recorded with a.o. the Trio Bert Lochs and Willem Hellbreker/Frits Landesbergen’s Saxvibes. Since 2001 he fills the bass chair at the silent movie orchestras The Sprockets and Orchestra da Camera Oscura. He performed in a.o. Belgium, Germany, France, Spain, Switzerland, Hungary, Italy and Finland.