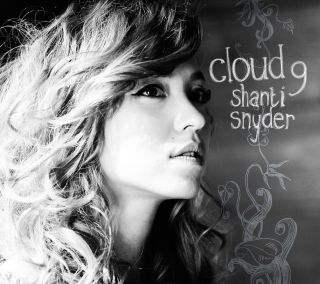 Catalog number: ST 75771
Releasedate: 01-11-12
A superstar in Japan, and a rising star in the rest of the world: Shanti Snyder releases Cloud 9, her promising debut album on Supertracks. This singer/songwriter digs into her soul and has it in her to touch a lot of people!

Her mother acted as an interpreter for rock bands like Queen and Chicago visiting Japan. Her American father was the drummer of Godiego, with over 50 albums under their belt one of Japan’s most popular rock bands. So it’s hardly surprising that their daughter Shanti, be it on her own terms, became, as the phrase goes, ‘big in Japan’. Her albums hit the # 1 spot in the iTunes Jazz Charts and in 2011 Sunny & Blue even reached the # 10 position in the overall iTunes Charts – not bad for a jazz record. But there’s even more to Shanti. Her voice can be heard in popular Japanese animation movies, on television she hosted a music show and in a coffee commercial featuring Scarlett Johanson it’s Shanti’s sweet voice that finally made the viewers yearn for a nice caffe latte. Having said all that, it’s of the utmost importance to know that, in spite of the popular successes, Shanti’s main focus is on the music. A talented singer-songwriter, an accomplished guitarist and, foremost, a singer who digs deep into her soul: Shanti takes to music like a fish takes to water – hence her breezy, sea wind kind of voice. “I was literally born and raised on the ocean front, “ She explains referring to her native town of Zushi in the prefecture of Kanagawa. “Zushi is near the harbour of Yokohama, the city where I live now. That’s also one of the first Japanese cities where jazz became popular. The sailors brought the music with them, and it never left.” Earlier this year Shanti came to Amsterdam to compile and re-record tracks for Cloud 9, an introductory selection of the finest songs from her Japanese success albums. Not your run-of-the-mill compilation album – that would have been too easy and wouldn’t have done justice to Shanti’s development as an artist. Most of the songs have been re-arranged, some even embellished by brilliant performances of pianist Marc van Roon and trumpeter Angelo Verploegen. During an inspiring week in the Amsterdam PowerSound Studios all of the songs were provided with new vocals, resulting in Shanti’s most convincing and deeply felt performances to date. One of her Japan-albums was appropriately titled Born to Sing. However we, in all modesty, think we can top that title with Cloud 9.  Because that’s where Shanti’s glorious singing will eventually take us. - Ruud Meijer
Shanti Snyder
Active in the Japanese music industry, writing lyrics and singing for jingles and film music, or collaborating with many artists there, such as Toku, Marleen, Take 6, Kuwata Keisuke, Hajime Yoshizawa etc., her voice is also known world wide via her work with the composer Kanno Yoko for various animated films.

She's appeared on stage as a background vocalist with a variety of top artists and since 2003 has been performing on her own in various formations.

From October 2008 until March of 2010 Shanti was the co-host of J-Melo, a music program broadcast on NHK World in 180 countries. She's was invited back on the show to perform in Febuary, 2011. She's also an acomplished artist and has already done some exhibitions of her work. Click on ART.

Since April, 2011 she's co-hosting a Friday evening, NHK TV program called "El Mundo." She performs on the show from time to time. Info (in japanese only)

Shanti had her first European tour, in June of 2011 playing in Paris, Cologne, Madrid, Astorius, Lisbon & Paris again. For her very first concert outside of Japan, on June 21st, in Paris. the audience rewarded her with a full standing ovation. Now she has, with 'Cloud 9' her European debut,outside of japan on Supertracks!