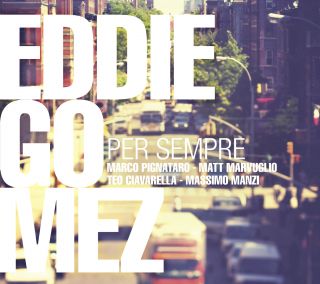 I’m ever so grateful to Marco for his great sound, compositions and input and commitment to the project.  Matt is one of the great flute players of our time.  He is a real discovery for me. His writing is also very special.  Teo brought a profound spirit to this recording, and of course his jewel of a melody dedicated to his daughter 'Ariana'.  Massimo is one of a few drummers who plays with a deep sensibility and awareness of music. A gem.

Born in 1944 in Santurce, Puerto Rico, Eddie moved to New York City with his family at an early age. His love of music led him to the double bass as a precocious 11-year old student in the public school system. Two years later he was accepted to the High School of Music and Art and soon began private studies with the great double bass teacher Fred Zimmerman. During these years, he performed with many professional dance bands and was a member of the Newport Youth Band led by Marshall Brown. By 18, he had performed with such jazz luminaries as Buck Clayton, Marian McPartland and Paul Bley.

Eddie continued his studies at the Juilliard School of Music, where his contemporaries included Chick Corea, Hubert Laws, James Levine, Itzak Perlman, Paula Robinson and Gary Karr. By the end of his third year of school, he dreamed of a career as a performing jazz musician. Later that summer he joined with Gary McFarland and soon after the Gerry Mulligan Quintet.

In the spring of 1966, both Mulligan's group (with Eddie on bass) and the Bill Evans Trio performed for a week at the famed Village Vanguard. That week at the Vanguard changed Eddie's life forever. When Bill Evans heard the young phenom, he practically hired him on the spot. Bill called a few weeks later and Eddie?s dream had been realized. At age 21, he was the bassist with the Bill Evans Trio and rose quickly to fame. TIME magazine declared in its review of the trio's first recording, "Eddie Gomez has the world on his strings".

Joining the Bill Evans Trio was indeed a turning point in Eddie's career. He had arrived in a big way and the jazz community took notice. For 11 years, Eddie played an integral role in the Bill Evans Trio's sound and evolution. This period of vast artistic growth with Bill Evans included performances throughout the United States, Europe, South America and Asia, as well as dozens of recordings - two of which won GRAMMY awards. During this time, Eddie also realized another dream performing on many occasions with the great Miles Davis, in the Davis quintet that also featured Wayne Shorter, Herbie Hancock and Tony Williams.

In 1977, Eddie left the Evans Trio to explore new musical territory. For the next decade, he performed in many diverse musical contexts, working with Dizzy Gillespie, Freddie Hubbard, George Benson, McCoy Tyner, Hank Jones, Nancy Wilson, Tania Maria, Ray Barreto, the All Star groups "Steps Ahead" and "New Directions" and many others, as well as on GRAMMY-winning recordings with Chick Corea.

In the classical music world, Eddie has been a guest artist with The Kronos Quartet, Tashi Ensemble, Japanese marimbist Mika Yoshida and clarinetist Richard Stoltzman. His recordings with Stoltzman have included "Begin Sweet World" and most recently "The Goldberg Variations' and other pieces by Johann Sebastian Bach. At Carnegie Recital Hall, Eddie premiered a musical piece written specifically for him by William Thomas McKinley.

In popular music, Eddie has performed and recorded with artists such as Bobby Darin, Tim Hardin, Carly Simon, Art Garfunkel, Mark Knoffler, Michael Franks, Judy Collins and Jennifer Holliday. He has also been a member of "The Gadd Gang," Steve Gadd's All Star R&B/jazz band.

Today, Eddie tours and records with his own group, which he formed in 1992 with pianist Stefan Karlson and legendary drummer Jimmy Cobb. The group's recordings include "Live in Japan," "Dedication" and "Uptown Music." He is composing for his own projects as well as for film and television most notably for the prize-winning William Steig animation, "The Amazing Bone.' Eddie Gomez continues to enjoy an active, international career as a performer, recording artist, composer, educator and featured guest artist on many high profile projects.