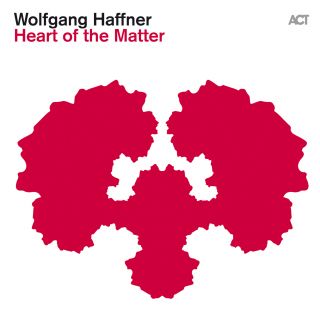 Heart of the Matter

Catalog number: ACT 95352
Releasedate: 26-10-12
The title "Heart of the Matter" of Wolfgang Haffner's latest album is definitely more than just a play on words. For Germany's most highly decorated drummer, including the Echo Jazz 2010 award, his profession has been "a matter of the heart" ever since he began his career at the tender age of 18 in Albert Mangelsdorff's band. The work that followed for innumerable German and international stars and his participation on more than 400 albums bears witness to this. But only since he started recording his own albums as an ACT artist has he felt close to the "heart of the matter": "I don't see myself as just a drummer anymore, but as a universal musician. I compose, arrange, seek out and enter worlds of sound. That is my thing."

So "Heart of the Matter" is a logical continuation of the path that Haffner took with his previous albums "Shapes", "Acoustic Shapes" and "Round Silence":
Again it is about organic, calm music with a strong groove, substantial melodies full of colour and space. "I have found a sound for myself; one that corresponds to me. And yet each time I progress a little further. This time I discovered new instrumentation possibilities and the inclusion of voices," says Haffner. Perhaps the change of scenery played a part. Haffner composed most of "Round Silence" on Formentera. Now he has been living in Ibiza since 2010. "When you sit by the sea, the moods and inspirations come to you on their own." So it is easy to deduce where titles such as "Nacho" and "Island Life" came from, which form a kind of framework for the ten tracks on the album.

The compositions are one thing, how they are played another. This is where Haffner gets back what he has given other musicians for so many years. The core of the team that Haffner gathered together in the well-known Berlin Hansa Studios – where artists the likes of David Bowie, u2 and Depeche Mode produced their hits – is made up of old companions: From trumpeter and multi-instrumentalist Sebastian Studnitzky, who already played on "Shapes" and "Round Silence", to keyboarder Eythor Gunnarsson, the Icelandic megaband Mezzoforte, whose album "Forward Motion" Haffner produced in 2004, through to Sting guitarist Dominic Miller. How it came about that Miller played all the acoustic guitar on the album is indicative of the production as a whole: "We had the studio for three days," Haffner recalls, "Dominic was on the way back home from London and actually only had the first day free. But on the second day he just came back in and said "I'm staying. I love it." And then he even stayed for the third day."

Just one of many similar stories. For example, the world famous bass baritone Thomas Quasthoff, whose solo jazz evenings Haffner accompanied as drummer, absolutely wanted to be involved, as Haffner recounts: "Just as he was planning his retirement from the concert circuit, I told him I would be going into the studio soon. He immediately asked: "And where's the track I'm singing on?" And despite all his teaching duties, he came to the studio right away. It was important to me that he didn't just sing some token song: I wanted to use him as an instrument with his timbres and fascinating percussion sounds. He hadn't done that before on any album, and I think it worked out amazingly on "Melodia del Viento"."

Till Brönner, who doesn't actually do guest appearances, also made an exception for his old friend, and plays the flugelhorn solo on "Here’s To Life". The track from Artie Butler is not only extraordinary because it is one of the rare cover versions on a Haffner album: "The song has been a going concern for Till and me since we recorded "New York Love" in 1998, his first album for Verve, sung by Shirley Horne. A fantastic song! I'd been wanting to do something with that song for years, but without vocals. When I spoke to Till about it and asked him for the music, he said: "Why don't you just let me play it on the horn? We've been stuck for what to do with this number for 15 years now; I just want to play it." Chuck Loeb had also played on Brönner's album "Love". Wolfgang Haffner had introduced the American guitarist to Brönner at the time. Now his distinctive electric guitar can be heard on two tracks on "Heart of the Matter".

A long-time mutual admiration also connects Haffner and Götz Alsmann, who can be heard as accordionist on "Between A Smile And A Tear". At the Echo Jazz 2010 awards, Haffner took the stage for the first time together with singer Céline Rudolph. That was when they had the idea to do something together. The guest appearances of clarinettist Magnus Lindgren, singer and percussionist Andrew Lovell, aka Shovell and known as a member of the English band M-People, similarly come under the category of a "favour from a friend".

"Everyone on Matter of the Heart is connected some way. None of them were just booked. We're all friends", Haffner summarises. This is probably the key reason why it all sounds like a band situation, like live jazz spirit, why the album lives and breathes. Together they have advanced to the musical heart of things the way Wolfgang Haffner sees them.