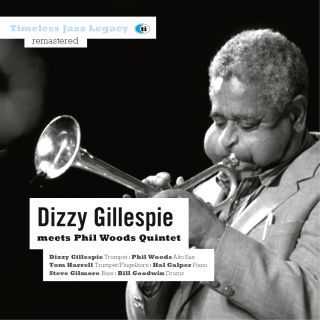 Catalog number: TJL 74513
Releasedate: 28-09-12
A European studio session featuring Dizzy as a special guest sitting in with one of Woods' greatest quintets! A re-release.
Dizzy Gillespie and Phil Woods go back a long way. Phil worked with Dizzy's big band on tour in the mid-1950s, and it seems natural for someone like Woods - a disciple of Charlie Parker - to play with Gillespie, who was Parker's closest associate from the bebop years. They certainly sound at ease in one another's company. (source: musicweb-international)

One of the true masters of the bop vocabulary, Phil Woods has had his own sound since the mid-'50s and stuck to his musical guns throughout a remarkably productive career. There has never been a doubt that he is one of the top alto saxophonists alive, and he has lost neither his enthusiasm nor his creativity through the years.

History has produced its share of great artists and great people—John Birks "Dizzy" Gillespie was both. As a performer, he left behind an incredible record of innovation and inspiration; as a composer, a broad repository of musical masterpieces; and as a man, a legion of friends, colleagues and compatriots who remember him with the same degree of love and esteem they reserve for his work.