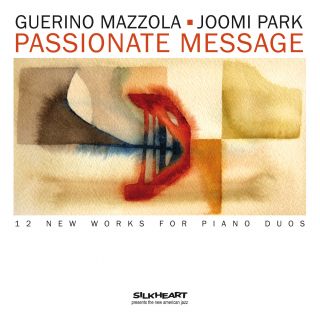 Catalog number: SHCD 159
Releasedate: 19-10-12
Silkheart Records has previously released two CDs presenting the dynamics of Guerino Mazzola on grand piano and Heinz Geisser on percussion – Folia/The UNAM Concert and Someday respectively. This time we have decided to invest in a new type of dynamics – the one between two improvisional pianists – Guerino Mazzola and Joomi Park. Our decision was based on a concept presented to us by Mazzola and Park to consider:
« The principal idea for this CD was to set up a profound dialogue of two completely different styles – Joomi’s contemporary music approach to composition and improvisation, versus Guerino’s free jazz improvisation with previously prepared basic materials – and then synthesizing these styles in a shared improvisation on two pianos.
Our general strategy was to investigate composition by improvisation and also to integrate composition in the improvisational approach. So it was not general free jazz, but the integration of compositional material in improvisation by Guerino and also a synthesis of Joomi’s and Guerino’s soli in a shared improvisation. Here the new music and the free jazz idioms were confronted and merged. Joomi’ and Guerino’s contributions were developed in a prolific discussion in the construction of these musics, meaning that none was an isolated creation but resulted from an intense musical exchange of ideas and performances. »