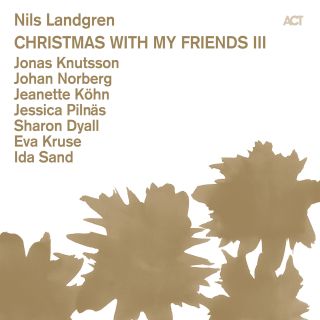 Christmas With My Friends III

Catalog number: ACT 95272
Releasedate: 26-10-12
Tradition is one of the things through which a person finds out where he comes from and what makes him who he is. Perhaps the most important spiritual tradition in the Western world is Christmas – and music is a big part of that. Christmas songs are their own genre around the world, which is linked to ceremonial and happy togetherness like no other.

Christmas music has always had a magical attraction for jazz musicians as well. The trombonist, singer and producer Nils Landgren, one of the most versatile, creative and successful jazz musicians Europe has had to offer for a long time, has dreamed for many years of celebrating a musical Christmas – together with good friends and with a selection of the many different Christmas songs that he has encountered throughout the course of his career. He did so in 2006, and because "Christmas With My Friends" was soon considered by fans and critics to be one of the best Christmas albums ever recorded, "Christmas With My Friends II" followed two years later with just as much success. Landgren's Christmas recordings "sparkle like the night sky in a Nordic winter's night," the STERN magazine enthused. And because it wouldn't be right to end a good tradition, we now have grounds to rejoice again: "Christmas With My Friends III" is here.

The same musical confidantes of Landgren on the second album got together again this time: Jonas Knutsson on the saxophone, Johan Norberg on the guitar, Eva Kruse on bass and Ida Sand on the piano, and as one of four vocalists together with Sharon Dyall, Jessica Pilnäs and Jeanette Köhn. But they didn't record in a studio like in 2008, instead they chose one of the biggest churches in Stockholm, the Storkyrkan, and filled it with 1,500 guests on the 19th and 20th of December last year. "Everyone was happy and excited and you can feel that energy on the album. That's where I wanted to get back to, towards the first album that we also recorded in the church," Landgren explains.

The programme came together in the best spirit of friendship: "Of course I always have a few ideas myself, but I ask everyone for two suggestions. Then we see what fits best and how we can arrange it, especially for guitar and piano as the main harmony instruments. Then we all work on it together. It's really very democratic."

So it makes sense that with so many different and highly qualified individuals participating on an equal footing an enormous bandwidth resulted quite autonomously on the 14 tracks: from old classics such as "Nativity Carol" and "Gläd dig du kristi brud," on which soprano Jeanette Köhns comes across particularly impressively, to grooving spirituals like "Somebody Talkin" and "Infant Holy, Infant Lowly"; from German and Swedish originals, through to American songs; from orchestral "Someday at Christmas" to the a cappella piece "Bethlehem Down"; and from traditional tunes through to the ballad "Christmas Is Here" written by Landgren himself.

The democratic work method also explains why the so varied songs fit together so completely harmoniously. One very special highlight are the choral passages with the four singers. It is very rare to hear artists of this quality singing together. "We rehearsed for a long time. It isn't as easy as it sounds," Landgren stresses. But the very special allure for all of us lay in delving into that clear, powerful musical language again that is technically so reduced for a jazz musician. It is the contemplation of the essential. "I just need that from time to time," says Landgren.

So it is an invocation of peace and friendship that everyone can be a part of – with the CD "Christmas With My Friends III", and on the Christmas tour through Germany, which Landgren and his seven friends will be embarking on from 6 to 22 December.

"After two very successful recordings of Christmas melodies and extremely well received concerts, the decision had to be made. Shall we make a third one or not, are there still songs to be sung, is there an audience for it? We, meaning everyone in the group, decided to give it a go and we found so many songs just waiting to be sung and played. Songs with a connection to Christmas, in one way or the other. We wanted to stay in the tradition of the first two albums and I believe that this collection of songs truly reflects all our thoughts and wishes. A time to enjoy the company of our dear ones, a time to relax and to contemplate but also a time filled with the joyful spirits that we all associate with the conception of Christmas. To record the music live was important and we went for the biggest church in Stockholm, Storkyrkan. Over 1500 people came to listen and I promise that they were all there, even if it is not to be heard on the recording until the very end. For all of us performing, it was a magic evening and I believe that the audience felt the same way. Our hope is that we can give to you the same feeling as we had during our performance that became this album, Christmas With My Friends III." - Nils Landgren & CWMF