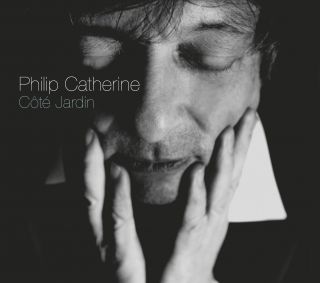 Catalog number: CHR 70178
Releasedate: 06-11-12
With this new album 'Coté Jardin' Philip Catherine, who just turned 70, shows that he is as strong and original as ever and a big inspiration to the younger generation musicians!
"Philip Catherine: a sound, Philip Catherine: a man with a stunning originality, a guitarist embracing tradition, but so much finding his own road coming from that tradition. Philip the composer, Philip the virtuoso, Philip the artist searching for more, for something fresh, a new angle.

The origin of the CD you hold in your hand goes back into Philip’s musical past. Somehow Philip’s strongest expression might be in his original compositions where he tries to paint musical pictures that each have a strong musical identity. His way of shaping the music in this way can be clearly traced back to his wonderful recording “Transparence” (1986), and one can also observe examples on different albums afterwards.

Since a short while Philip created a new band with two young and upcoming musicians on the Belgian scene: Nicola Andrioli (1977),an Italian pianist living in Brussels, is more than a gifted and excellent instrumentalist: he is a strong composer and his sense of always knowing to play what is right for the situation is breathtaking. Drummer Antoine Pierre (1992!) somehow embraces it all: proficient in the modern idiom, yet with the ability to create a loose, deep and flexible swing when needed -a trait that is so very rare with drummers nowadays. Bassist Philippe Aerts (1964) has been on Philip Catherine’s side for almost 20 years and knows like no other how to cement the energy of the other band members into cohesiveness. His role is perhaps subdued, yet so essential in the creation of the music as a whole. The secret ingredient of this record for me is the presence of keyboard player Philippe Decock. His tasteful and often unusual use of sounds give the music a depth in sound and texture. A special word has to be dedicated to Philip’s daughter Isabelle. Isabelle came into the studio to sing one of her father’s classic tunes; “Côté Jardin” with gorgeous lyrics by Jacques Duvall. Her intimate interpretation draws one in. There is a graceful beauty about the way Isabelle delivers the words and the melody, unassuming and delicate, yet strong in its expression."(from the linernotes of the cd by Hein Van de Geyn)


Philip Catherine has been on the forefront of the European jazz scene since the sixties. He has worked with great artists like Lou Bennett, Billy Brooks, Edgar Bateman, John Lee, Gerry Brown, Jean Luc Ponty, Larry Coryell, Alphonse Mouzon, Charlie Mariano, Niels Henning Orsted Pedersen, Kenny Drew, Dexter Gordon, Toots Thielemans, Stéphane Grappelli, Charles Mingus, Chet Baker, Tom Harrell, the rock group Focus. His unique approach and sound, his dedication to music and, above all, the highly emotional lyricism of expression in his playing and in his music, have been important and influential.

Philip Catherine was born in London in 1942. Coming from a musical family (his grandfather was first violin with the London Symphony Orchestra), he developed a musical ear from an early age. He took up the guitar after having heard George Brassens, and then started listening to all the great jazzmen of the period. Very soon he had the opportunity to meet some of them, and often play with them when they were performing in Belgium where his family had moved to by then.