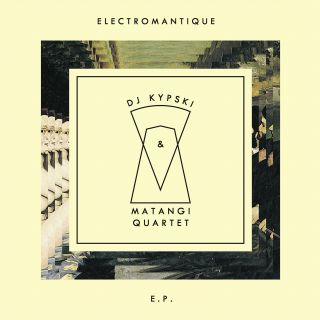 Catalog number: ZZ 76104
Releasedate:
A classical string quartet with a dj/scratcher? Yes indeed! 'Electromantique' a truly hybrid form of classical and dance music in its broadest sense. This new great band is a coming together of two worlds: Matangi Quartet and DJ Kypski!
The Matangi Quartet and DJ Kypski are both very well-known in their own field of music. But both want to broaden their horizon and that is where they meet. "Electromantique" explores the world of classical music together with for instance dance.

The music of Electromantique seamlessly goes from hip hop to minimal music, from electro to baroque, from dubstep to experimental. They perform and play live together. This is not a string quartet playing along with a dj or a dj who puts a few beats under some strings. This is a real band of 5 musicians: a quintet.

Although their musical worlds are miles apart they have one common passion - the exploration and the breaking through musical barriers and the development of new and adventurous music and sounds.

The Matangi Quartet was founded in 1999 by four young musicians then studying at the Royal Conservatoire in The Hague and the Conservatory of Rotterdam. In 2003 Matangi completed the two-year, full-time course at the Netherlands String Quartet Academy under the direction of Stefan Metz (cellist, Orlando Quartet). At the Academy, the Matangi Quartet had the opportunity to take lessons from international renowned musicians, including the members of the Amadeus Quartet. The quartet also received intensive mentoring from Henk Guittart (violist, Schönberg Quartet) for several years.

The Matangi Quartet has since developed into a regular performer in the Dutch chamber music scene and abroad. With their impassioned playing and smart presentation, Maria-Paula, Daniel, Karsten and Arno epitomize a new generation of classical musicians. They are often characterized by words such as communicative, provocative and refreshingly versatile. The Matangi Quartet has shared the stage with various top-class classical musicians such as the Schönberg Quartet, the Royal Quartet, Miranda van Kralingen, Tania Kross, Ivo Janssen, Paolo Giacometti and Severin von Eckardstein.

Matangi regularly participates in innovative crossover projects and has performed in collaboration with artists such as cabaretiers Herman van Veen and Youp van ’t Hek, bandoneon player Carel Kraayenhof, jazz trumpeter Eric Vloeimans, DJ Kypski, jazz vocalists Mathilde Santing and Renske Taminiau, singer songwriters Lory Liebermann and Tom McRae. These pioneering excursions beyond the borders of classical music have resulted in Matangi winning an enthusiastic new public for the string quartet. No less important, this has provided a source of inspiration for infusing performances of the rich classical repertoire built up over the past 250 years – from Haydn to Adès – with new élan. For essentially, the Matangi are focused on just one thing: letting the audience palpably experience the energy, passion and excitement that is inherent in all good music.
All four musicians perform on instruments of Dutch workmanship. The cello and first violin have been provided on loan by the Dutch National Musical Instrument Foundation.

Matangi is the Indian goddess of speech, music and writing. The vina that she carries in her hand is an instrument that produces deep sounds with pleasing overtones. Matangi transports her listeners with her playing on the strings of passion, fervour, love and ecstasy.

Canada has dj A-Trak, but Holland has dj Kypski. This six-time Dutch dj champion and scratching virtuoso is a key figure in the dutch dj scene. Known for his scratching, drumming and production in the Dutch eclectic band C-Mon & Kypski, he is now ready to rock the decks with his own style of dancemusic. He’s released seven albums with his band, two scratch-records, has made several remixes for bands like zZz, Lotus, but perhaps his most well-known remix is Deadelus’ ‘Touchtone’ (Kypski Remix), released on Ninja-Tune in 2008. In that year Kypski also released his infamous mixtape ‘Kyptape 2008′.

Kypski collaborates with legendary musicians in almost every thinkable genre, and has played or dj-ed at the biggest venues in Holland and abroad. From the Paradiso, Melkweg, Heineken Music Hall in Amsterdam to the Hammerstein Ballroom and Webster Hall in NYC, where he could be seen last year Dj-ing next to Hot Chip. Kypski had been schooled in turntablism by U.S. dj Ace in 1996, who works together with the scratching legends D-Styles and Q-Bert, the people who in their turn schooled dj A-Trak. When Kypski came back from the States in 1997, he won every dj contest in Holland. He now starts off with a new project, called ‘Partyscratch’. Scratch music to party to. Using his scratching skills with genres ranging from Disco to Techno, Kypski’s signature can be distinguished in every track.