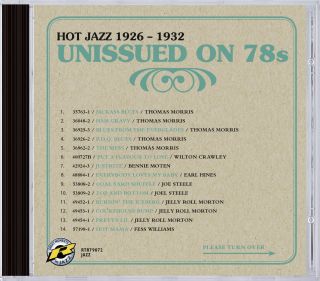 Catalog number: RTR 79072
Releasedate: 01-03-13
Let’s make it plain from the start. “Unissued on 78s” means just that, no more, no less. Some of the tracks on this CD have been issued on LP, some even on CD (maybe more than I know of), but none were ever issued on 78s and quite a lot are seeing the light of day for the very first time.

Including great artists as:
As we said on our first volume in this CD series the title “Not issued on 78’s” means just that – no more no less. Quite a few of the items here may well have appeared on LP”s, but if so they would be 30 or 40 years old by now and collector’s items in their own right. If some tracks have been on CD before we are unaware of it, but no guaran- tees! In these days of proliferating small specialists it is quite possible that we have missed something.

The five Thomas Morris alternate takes starting with the beautifully vulgar animal sounds that begin “ Jackass Blues”, romp along in fine style and one wonders just how much of an influence the band may have had on young Duke Ellington in his “jungle” days.

Wilton Crawley’s ‘s “Put a flavour to love” was never issued at all and only one take was made. It’s typical Crawley at his gaspipey worst and finds a place here by virtue of some splendid work from the wonderful Eddie Lang, who seems to have been impervious to his surroundings.
The hard-bitten Joe Steele titles are not that well known and make one wish that he had done more recording.
Fess Williams is another squawk merchant on clarinet but he always led great bands. The two takes of “Hot Mama”, written by the band’s fine trombonist David “Jelly” James, are from two different sessions and quite sufficiently different to justify using both here.
Duke’ s “I’m so in love with you”, with lyrics by his manager/music publisher Irving Mill, sounds like a deliberate attempt at writing a “pop” song. They even got Smith Ballew to do the vocal honours. It’s no worse than many pot-boilers of the time, but the band warm up considerably after the vocal chorus and make this well worth re-discovering.

The Washboard Rhythm Kings version of the Luis Russell staple “ Call of the Freaks” is fine, but, as usual with this group, in shrouded in discographical mystery.

Mills Blue Rhythm Band does a nice job on the current pop “Cabin in the Cotton” , which comes from the TO test series.
The biggest mystery, and a very in- triguing one, is the Leon René. A very fine, very polished and swinging band, but who are they? Nothing was issued (also - why?). René and his brother were quite successful West Coast song- writers, but nothing is known about this venture.
The Morton’s, Moten’s McKinney and Hines are all too well known in their issued takes to need any analysis here. Great stuff of classic proportions – ‘Nuff said!