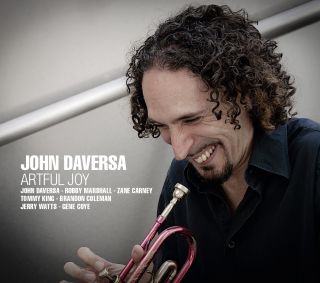 Catalog number: CR 73359
Releasedate: 01-03-13
In addition to his Progressive Big Band, Daversa leads the John Daversa Small Band. This powerhouse ensemble sounds huge. The hallmark of great musicians: they keep getting better!
It takes a rare talent to be able to make a large band sound small in terms of agility as well as in the transparency and lightness of orchestration, and vice-versa some measure of genius to make a small band seem big. This band sounds huge. And let's not forget, modern. New is in a rare supply these days, but you found yourself some new right here. Track by track and blow by blow descriptions leave one breathless. This powerhouse ensemble transitions with ease from sections of incredible sensitivity to vignettes of intensity rivaling that of his own Big Band. The Small Group latest album "Artful Joy" features Bob Mintzer and Gretchen Parlato.
John Daversa is a versatile and respected performer, composer, arranger, producer, bandleader, and educator. Coming from a musical family, Daversa took an immediate interest in music at an early age; first through piano and voice, and later with trumpet and EVI (Electric Valve Instrument).

By the age of 15, jazz had become part of John’s identity as he attended the Los Angeles Music Magnet, Hamilton High School Academy of the Arts, from 1989 to 1991. After high school, he attended UCLA studying with classical trumpet virtuosi Mario Guarneri and Malcolm McNab. Although John’s musical interests were firmly placed in jazz (playing trumpet and electric bass in the UCLA jazz bands), he pursued a Bachelor of Arts degree with a concentration in classical composition. During that time, John won the Herb Alpert Award, David Joel Miller Award, National Trumpet Competition, ITG Jazz Soloist Competition, and was a finalist in the Thelonious Monk International Jazz Competition.

In 1996, he formed the John Daversa Progressive Big Band, which continues to perform regularly in the Los Angeles area. Over the past two years, the band has developed a following at the world famous Baked Potato, performing the last Sunday of every month. Daversa’s compositions and improvisations mirror a musical philosophy that aims to stretch boundaries, while maintaining a reverence for the jazz tradition.

John has had the opportunity to arrange and/or compose for Fiona Apple (Extraordinary Machine, 2005), Eleisha Eagle (Lamplighter 2006), Gay Men’s Chorus of Los Angeles (Tribute to Burt Bacharach Live Show, 2005), and Pacific Serenades (Between the Thoughts, 2008) and James Tormé (Love For Sale, 2009).