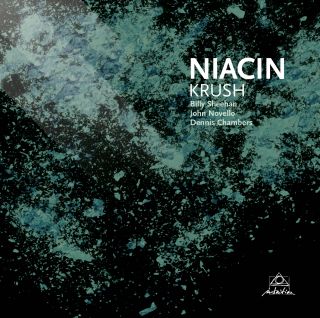 Catalog number: INT 34172
Releasedate: 28-03-13
As All About Jazz once wrote (about the album "Organik"): "...for those who like it in-your-face, unrepentant, and hyper-kinetic, Niacin is just the ticket." That's just the way it is.
Bill Sheehan, John Novello and Dennis Chambers took eight years time for their new album, but the wait was worth it. The band name "Niacin" is a pun. Niacin is the scientific term for vitamin B3, which has an important function in metabolism. The Hammond B 3 is also the part of this trio that determines the sound, so they decided to select this name.
The opening piece, which provides the title, also makes it unmistakably clear where the musical journey is going and blows forcefully through your auditory channels. "Krush" is already the eighth recording of the trio and continues the series seamlessly. When three exceptional musicians of this caliber play in one band, you can get the impression of being at a summit meeting of neurotics. But you couldn't be more wrong! The trio has a lot fun playing, and that in complete harmony with one another. You can hear in every piece that the gentlemen really enjoyed themselves during the recording. A real summit meeting that "rocks" in the best sense of the word!
E-bass giant Bill Sheehan became known to a larger audience above all with his band Mr. Big, but he is also a bassist much in demand in studios and as teacher. He has already performed with Talas, David Lee Roth, Terry Bozio, Glenn Hughes, Steve Vay, Tony McAlpine and many more. He is considered a reference among bassists of all genres; his style and melodic character are unique.

John Novello, who has internalized the rich tradition of the B3 from Jimmy Smith to John Lord and all the way to Keith Emerson, has already provided his talents to Andy Summers, Mark Isham and Chick Corea in addition to his very varied solo projects. He has also published numerous keyboard textbooks and composed music for movies. He was the one who founded the band Niacin in 1996 and has produced almost all their albums.

Dennis Chambers, the third in the group, is certainly one of the fusion and jazz-rock drummers most in demand... His first performances (when he was 18!) were with George Clinton's Parliament/Funkadelic Band, and he has played with John Scofield, Chick Corea, Steely Dan, Carlos Santana and many others.