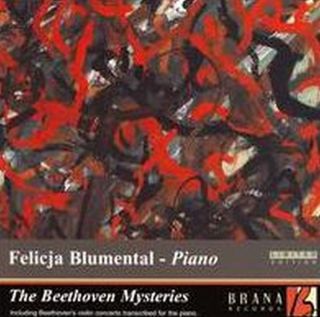 (Transcribed for the piano by the composer.)

The piano concertos of Ludwig van Beethoven (1770 – 1827) are among the best known works in the classical repertoire. The violin concerto in D major Op 61, written in 1806 is also now a well-loved favourite. However, Beethoven’s own transcription for the piano, of this concerto has been sadly neglected. Why should that be? It was better received than the original and requires much more of the soloist.

Beethoven transcribed a number of his works and he wasn’t alone. JS Bach, Vivaldi and Telemann all re-scored their works.

Beethoven wrote the violin concerto for a friend, Franz Clement. The first performance was on 23rd December 1806 and was received frostily, partly because Franz had to sight-read the solo part. It arrived just moments before the performance.

The transcription for piano was written a year after the original but published earlier in 1808. It’s likely that the greater number of talented keyboard players than violinists made the early publication of the piano transcription a more attractive proposition. It was immediately accepted by the keyboard virtuosi of the time and was championed by pianist and composer Muzio Clementi.

The original composition for violin soloist was called “A Symphony for Violin and Orchestra”, a title justified perhaps in the light of the comparative lack of virtuosity required by the solo part. The transcription for piano on the other hand, is much more demanding.

Ludwig van Beethoven: Rondo in B Flat major Wo06

Mystery surrounds this beautiful piano work by Beethoven (recorded in 1967 in the Angelicum Theatre in Milan). The part used today is more brilliant and weighty than Beethoven’s original, the manuscript for which was lost. The piece survives only in this version by Beethoven’s pupil Carl Czerny, who enhanced the textures and added high notes not available on Beethoven’s early instruments.

We will never know exactly how much of this work is Beethoven and how much is Czerny, but it remains a work of charming and, in places, child-like individuality. Reassuringly it displays the elegant themes, transitions and modulations one would expect from the master composer.

In 1888, the German musicologist Guido Adler found the score of a first movement of an unfinished piano concerto. It had been copied out by a Prague musician, Joseph Bezecny with the title “Concerto in D major for Piano and Orchestra by L. van Beethoven” and dated 1830. Adler dated the composition between 1788 and 1793, as did other respected musicologists. The work was published in 1890, as an unfinished early work by Beethoven.

It would all have ended there, but in 1925 Hans Engel claimed that the fragment belonged to a concerto by a Bohemian composer Jan Joseph Rosler (1771 – 1813). The experts were unconvinced. They cited stylistic discrepancies between the fragment and the remaining Rosler movements as evidence that the work could not have been the missing movement of the Rosler concerto.

The case may never be proven scientifically but musically, there is every reason to believe that this movement was from the twenty year old Beethoven who had just discovered the work of Mozart and Haydn, whose influence can clearly be heard.