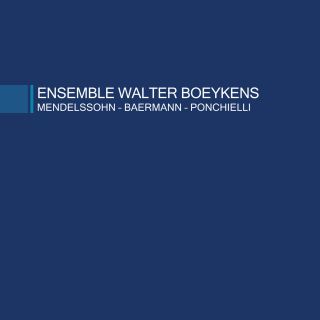 Catalog number: EPRC 0004
Releasedate: 12-08-09
On his third recording for the Penguin, Walter Boeykens explores 19th century chamber repertoire for two clarinets. There are interesting family ties on this disc between the original and the current performers. Mendelssohn wrote his Two Konzertstücke for two clarinets for father and son Heinrich and Carl Baermann, both exceptional clarinet virtuosi. Carl – no mean composer himself – wrote a Duo concertant which he performed with his father. Like Heinrich, Walter Boeykens has a talented daughter (Anne) to play the second clarinet in this programme of delightfully accessible salon music.

The Ensemble Walter Boeykens an ensemble “à géométrie variable”, aims to unite the top of the Belgian and foreign musicians according to the needs of the selected program. Most of its members are laureates of international music contests such as the “Queen Elisabeth” contest and are part of prestigious orchestra such as the VRT Orchestra and the Royal Philharmonic Orchestra of Flanders. They have contracts with interesting CD-labels, perform on the international music circuit and are invited all over the world to give master classes. They all have one and the same passion: the passion for chamber music.

It is obvious that the clarinet plays a prominent role. It is remarkable how Walter Boeykens secured a place of honour for his instrument within the chamber music repertoire. Mozart, Brahms, Weber, Beethoven, Schubert, Rossini, Donizetti and Poulenc have composed some masterpieces, but contributions to this literature have also come from lesser-known as well as fine contemporary Belgian composers, in some of which the clarinet plays a leading part accompanied by various other instruments.