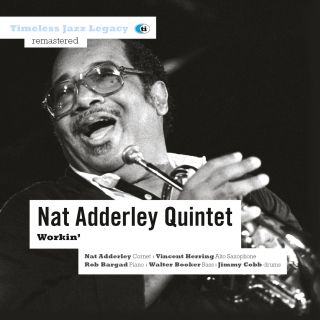 Catalog number: TJL 74511
Releasedate: 01-03-13
Nat Adderley’s Workin’ from 1992 features cornetist Nat in excellent form with hot solos from Vincent Herring.
Cornetist Nat Adderley found fame as the “brass section” with his brother Cannonball Adderley’s quintet. The Adderley Brothers played together most of the time for 20 years until Cannonball’s premature death in 1975. Nat Adderley, after some time off, formed a new quintet that at various times featured Sonny Fortune, Antonio Hart and Vincent Herring in Cannonball’s spot. Herring lasted the longest and fit in perfectly in the group

Workin’ has the 1992 version of the Nat Adderley Quintet performing live. At the time the group also included Herring, pianist Rob Bargad, bassist Walter Booker and drummer Jimmy Cobb. While at times during his later years Adderley’s playing could be a bit erratic, he is heard throughout this set in prime form, often sounding quite exuberant.

The group performs lengthy versions of five Nat Adderley originals including “The Chant,” “The Big J,” and his most famous song, “Work Song.” Herring is consistently passionate, hinting at Cannonball while mostly sounding like himself. The rhythm section is tight, with Bargad taking several fine solos while Booker and Cobb (who were both alumni of Cannonball’s group although from different periods) are stimulating in support of the soloists.

Due to Nat Adderley’s better-than-usual playing from this period, the tightness of the group and Vincent Herring’s inventive solos, Workin’ is one of the finest recordings by the Nat Adderley Quintet.