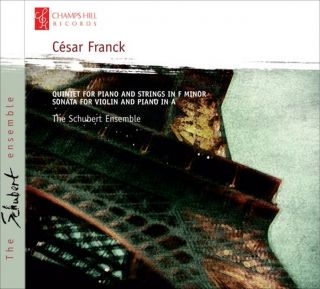 Catalog number: CHRCD 004
Releasedate: 01-07-10
This album from the renowned Schubert Ensemble bring the spirit of the Paris "Belle Epoque" alive. Newly re-mastered recordings of Franck's Piano Quintet in F minor and his Sonata for violin & piano in A are performed with enthusiasm by the experienced Schuberts.

Franck was known as a man "enamoured of gentleness and consolation", but these works tell a different story of an earthier man, less chaste, freed of starch and wing collar. Central to the quintet in particular was a woman; not Franck's dutiful wife, but a young student, Augusta Holmes "decorously rampant and possessed of bold beautiful features, abundant golden hair, and handsome breasts of which she was justifiably proud". Rimsky-Korsakov admired her, but in Paris, Saint-Saens and Franck fought over her. Franck's wife would have known that the emotions so readily expressed in this Quintet were not for her, but for Augusta, Franck's "impure and seductive" organ student.