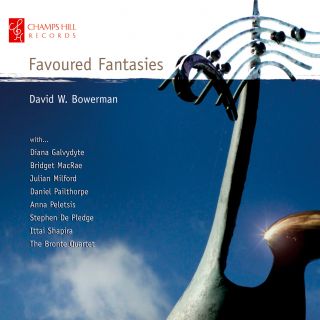 Catalog number: CHRCD 015
Releasedate: 01-01-11
Collated from compositions written over the last five years, this album features a number of well-known and up-and-coming artists. The flautist Daniel Pailthorpe is well known as a key part of the London Conchord Ensemble as well as the Principal Flute of the BBC Symphony Orchestra, Ittai Shapira is a well-respected violinist and regular concerto soloist in the USA and the UK, and Diana Galvydyte is fast establishing a secure reputation as an exceptional young violinist.

David Bowerman (b. 1936) is one of the most recent cause célébres in British music. He gave up early dreams of being involved in music in order to run the family farm, returning to his first love after his retirement. Coming late to the world of composition, he nonetheless demonstrates most original and inventive thoughts, written in a tonal style akin to a range across Dvorak, Elgar and Delius; English composers forming much of his inspiration.