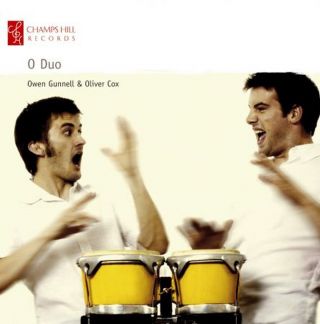 'O Duo' are Owen Gunnell and Oliver Cox, two percussionists who bring their eclectic and charistmatic approach to the music on this album. Well-known pieces such as Chopinʼs Fantasie- Impromptu - with its glorious central melody - and the textual clarity of Bachʼs music are juxtaposed with contemporary composers such as the Japanese composer Miki's Marimba Spiritual. There are many other contrasting pieces - for example Mendelssohnʼs Fugue No. 4 in F minor from 1834 and Ter Veldhuisʼ Goldrush written in 1995.

Among the pieces on the CD are two written especially for O Duo. McNeffʼs Baristas is based on sounds of a coffee shop, and of which the composer writes, "You only have to see a crack team of coffee-makers to appreciate the comparison [with percussionists] in speed, dexterity and - most importantly 'sound.'" Joliffeʼs Knock About, inspired by people casually kicking around a football and of which the composer writes "At its centre is one simple rhythm, but this is hidden by really fast music, which O Duo manage to pull off with their usual flair."