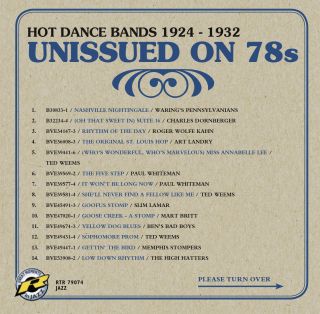 Catalog number: RTR 79074
Releasedate: 23-08-13
Let’s make it plain from the start. “Unissued on 78s” means just that, no more, no less. Some of the tracks on this CD have been issued on LP, some even on CD (maybe more than I know of), but none were ever issued on 78s and quite a lot are seeing the light of day for the very first time. Including artists as Ted Weems, Paul Whiteman, Sunny Clapp and Gus Arnheim and others!
Including such great artists as:
Ted Weems led a bright and springhtly band through the ' 20s, before turning to a sweeter sound in the '30s. He had no major star names in his outfit, but all of his players were of excellent standard, several of them quite capable of turning out hot solo's.
Paul Whiteman was the super-star of the dance band world throughout this period. Our two 1927 choices are plead from interesting arrangements and swing far more than most people would expect from this band before it acquired Bix, Steve Brown, Bill Challis et al from the defunct Jean Goldkette Orchestra.
Sunny Clapp was an accomplished bandleader, composer, arranger, trombonist, clarinetist, and alto saxophonist. And his band was hot!
Gus Arnheim Orchestra, popular from the smart Cocoanut Grove nightclub in Hollywood, but the chief attraction here is a young Bing Crosby showing exactly why he was about to become a superstar.


Let us emphasise that “Unissued on 78” means just that and no more. A few of the items on the CD may have surfaced briefly many years ago on LPs. So far as we are aware none have seen the light of day on CD. But we could be wrong on that score. In these days of proliferating small label issues we could easily have missed something.

In view of his later and long running career with his “Glee Club” it’s easy to forget that Fred Waring started in the early ‘20s leading a conventional dance band. Among his many records are a few that could be described as “hot”. One such is “Nashville Nightingale”, which once it gets over the silly bird effects, turns into a nicely swinging version of an attractive and not very well known early George Gershwin number.

Two bandleaders from Chicago, Art Kassell and former New Orleans Rhythm Kings pianist Elmer Schoebel produced “Suite16”, never a big hit song but one that received jazzy treatment on records from several well-known bands of the time, includingBritain’s Savey Orpheans. Former Paul Whiteman saxist Charles Dornberger’s popular outfit make a nice job of it. Victor Records chose not to issue any of the 4 takes that Roger Wolfe Kahn made of trumpeter Donald Lindley’s modernistic “Rhythm Of The Day”. Why is a mystery, at least judging by take 3 presented here. Kahn’s star studded personnel turn in in a fine interpretation of this interesting piece highlighted by Joe Venuti’s characteristic solo.

Not very well-known and without any star names, Art Landry’s Orchestra nonetheless made some interesting recordings in the ‘20s. They recorded 4 takes of J. Russell Robinson’s “The Original St. Louis Hop”, but none was issued. Why is a bit of a mystery because Take 3 presented here seems to be perfectly OK both for performance and recording.

Ted Weems led a bright and spritely band through the ‘20s, before turning to a sweeter sound in the ‘30s. He had no major star names in his outfit, but all of his players were of excellent standard, several of them quite capable of turning out hot solo’s. Such men as clarinettist Don Watt, alto saxist Dick Cunliffe and tuba stalwert Country Washburn are under-rated in jazz circles and Parker Gibbs played a good tenor sax and contributed his better than average vocals. It always sounds like a happy band, and judging by the length of time some of it’s players stayed with it, it probably was. We present here five samples of their work. More can be heard on RTR 79034 (2 disc’s set).

Paul Whiteman was the super-star of the dance band world throughout this period. Our two 1927 choices are
immediately played form interesting arrangements and swing far more than most people would expect from thisband before it acquired Bix, Steve Brown, Bill Challis it all from the defunet Jean Goldkette Orchestra. Nice work from the under-rated Matty Malneck on
violin Wilbur Hall plays pretty good guitar. There are also, of course the White Rhythm Boys, Bing Crosby, Al Rinker and Harry Barris - need we say more.

Those listeners preferring a gutsier sound should take a listen to our contingent of bands from the American South-West, Slim Lamar, Mart Britt, and The Memphis Stompers, Sunny Clapp. There was a fair degree of interaction between the first three of these and a strong New Orleans contingent such as trompet man Tony Almerica and the enigmatic and quite superb clarinnetist Sidney Arodin. Particularly noteworthy on Clapp’s “When My Baby Smiles To Me”. Unusually for that time Clapp features a very pleasant girl vocalist, one Jeanne Geddes, on a couple of tracks. Who’s she?

Mart Britt’s romping, stomping “Goose Greek” turns out to be closely related to Artie Mathews “Weary Blues”. Interested listeners should try our RTR 79006 “Texas and Tennesee Territory Bands” which contains the issued takes of “Goose Creek” and several more of these items, while RTR 79071 has further alternate takes. The Memphis Stompers led by Snooks Friedman are fairly obscure and no famous names are involved, but the likes of trumpetman James Mighore and drummer Friedman deserve to be better known.
It is generally believed that most titles recorded by the small band within a band from Ben Pollack’s Orchestra and commonly known as “Ben’s Bad Boys” were deliberately corny Dixieland take-off’s done at the behest of the recording contractor. This may be true for some (e.g. Shirt Tail Stomp) but their version of “Yellow Dog Blues” is good straight forward Dixieland with fine solo’s from Goodman, McPortland etc. The only “corny” touch is the brief reference to Harry Raderman’s laughing trombone from the best-selling Joseph C. Smith record of 1920.

The High Hatters were a Victor studio group, usually directed by Leonard Joy and generally producing good quality straight dance music. “Low Down Rhythm” is something of an exeption to the rule being decidedly hot with some notably fierce Mike Mosiello trumpet work. Bert Lown’s outfit was resident of the swanky Biltmore Hotel and has a rich, mellow sound in keeping with the venue. There are a couple of nice solos on “When I Take My Sugar To Tea”, one of the better pop songs of the time.

For our next two tracks we move to the smart Cocoanut Grove nightclub in Hollywood and the very popular Gus Arnheim Orchestra. Sitting in the sax section (tenor) was the soon to be famous film star Fred MacMurray, but the major point of interest is swingin’ vocalist and also soon to be film star Bing Crosby, showing exactly why he was streets ahead of any singing rivale at this time.