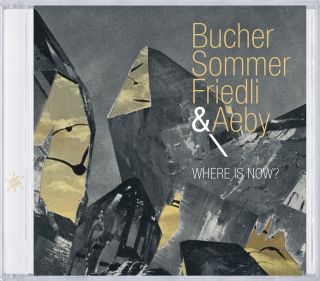 Catalog number: DMCHR 71123
Releasedate: 23-08-13
Bucher, Sommer, Friedli and Aeby studied at various Swiss music colleges and pursued further music training in New York & Los Angeles. They have been working actively as professional musicians for years in the Swiss jazz scene and take individual side-trips time and again into other music genres as well as into film and theater music.
- The trio BucherSommerFriedli, educated at swiss jazz schools as well as in North American, has successfully released CDs in the past.
- Pianist Stefan Aeby has joined the band and adds some new and surprising sound textures.
- This fabulous four artists create music that is not "just jazz" but also gives an idea how film music should be. Not thinking about genres, but about ideas.

As a trio, the Swiss BucherSommerFriedli have surveyed their field very precisely. All fringe areas of modern jazz including the urge to go out into the open and unknown have been mapped here with a lot of love for landscape details. The pianist and keyboarder Stefan Aeby has now enhanced the expedition into a quartet as a new member. "Where is Now?" the quartet BucherSommerFriedli and Aeby asks with their new CD and answers with an intoxicating trip into another world. They arrange filigreed structures, conjure up castles in the air, and meander single-mindedly but without haste through wondrous spheres. The band considers itself a collective and functions like intricate clockwork. With guitar, kalimba and harmonica, Michael Bucher wins over listeners for his vanilla-padded dream world. Patrick Sommer on contrabass and e-bass and Tobias Friedli on drums and percussion instruments interact intuitively and supply the resilient dynamics for improvisation without net and cushioned groundwork. Stefan Aeby on piano and Fender Rhodes creates color from black & white keys. They're a well-coordinated group of friends, certainly, and they are aware of their skills. Their field is marked out, but what a field! Reminiscences of the films of David Lynch come to mind, you see Dali dancing, and the roguish cleverness of this ensemble shines through again and again – and that is exactly where their strengths are. Something is created via the music, which fuses the fragmentation of the moment carefully back together again. Something that you see when listening. You feel when thinking. Something that is very special, but still such a matter of course.
Bucher, Sommer, Friedli and Aeby studied at various Swiss music colleges and pursued further music training in New York & Los Angeles. They have been working actively as professional musicians for years in the Swiss jazz scene and take individual side-trips time and again into other music genres as well as into film and theater music.
Michael Bucher, born in 1975, lives and works in Zurich where he completed his studies in music with a college degree in 1999. In 2000/ 2001, he continued his studies in New York where he took lessons from Peter Bernstein and Wayne Krantz, among others. You can already hear him on Double Moon Records as guitarist on Jochen Baldes' Kobal. Patrick Sommer was born in 1976. He studied at Bern College, attended numerous workshops held by renowned musicians such as Rufus Reid, Ray Brown, Dave Liebman, Jerry Bergonzi and others, and also studied in Los Angeles. Sommer is active in several other bands, among others, those of Max Lässer and Klaus Koenig. Tobias Friedli (born in 1978) lives and works in Bern where he graduated from the Art College in 2003. He also lived a few months in New York and took lessons from Ali Jackson and Amir Ziv, for example. In addition to other bands, he also plays in the Swiss Jazz Orchestra. Stefan Aeby was born in 1979. After graduating from Fribourg Conservatory, he continued his education by taking lessons from various musicians such as Art Lande, Don Friedman and Marc Copland. In 2005, he completed an additional degree in Musicology and Art History at Fribourg University. He plays in several bands these days, with which he tours internationally and has become well known; among others, they include Tobias Preisig Quartet, Lisette Spinnler Band and Christoph Irniger's Pilgrim (released in Between the Lines)