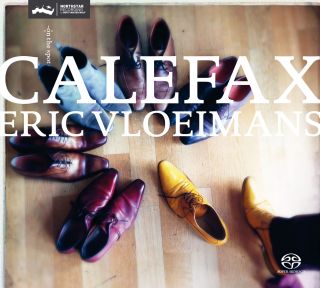 For a classical ensemble, improvisation is by no means an everyday pursuit. Yet during its 28-year history, Calefax Reed Quintet has repeatedly yielded to the temptation of extemporaneous performance. This often took place in the context of a pre-existing form, style or musical convention, and usually to a modest degree, for instance as part of a larger composition. Calefax, rooted in the eight centuries of music history from which it draws its concert repertoire, is well aware that music, as a rule, is the end result of improvisation and is often notated solely as a favor to the music-reading player. The desire inherent in the group’s past and present goal – to dissect and then reconstruct existing music – has resulted in the countless arrangements the group has performed the world over for nearly three decades. Each of the members is thus not only a performing but a creative artist as well, qualities that also define an improviser. Calefax underscores the importance of continuously exploring the link between these two styles of music-making. This has led to the music on the CD On the Spot.

A survey of music history shows that composers from distinctly disparate periods and locales had surprisingly similar goals in mind. Arranging music for an essentially fixed instrumentation has more than once brought musical parallels to the fore that otherwise might have gone unnoticed. In doing so, the quintet has created a practice for the playing, playful musician with befriended composers from all places and all times. Perhaps this is most applicable to the trumpeter Eric Vloeimans. While he is otherwise difficult to categorize, Vloeimans, with his well-nigh vocal playing style, is undoubtedly the ideal person to guide five classical musicians in the world of improvisation. Along the way he also showed a hunger for the wealth of classical music, willingly allowing members of the quintet in turn to lead him, without sacrificing any of his own uniqueness. Kinan Azmeh and Albert van Veenendaal both composed works especially for the marriage of these two types of musician. Additionally, Ivar Berix and Raaf Hekkema were given free rein to delve into the extensive oeuvre of Eric Vloeimans.

The CD opens with a new composition based on two pieces by Vloeimans: the illustrative Aladdin, which exhibits typical qualities of Vloeimans’ style: lightness, melancholy and lyricism. Aladdin is alternated with the contemplative requiem A.L.M.A. The result is a dialogue between the two, giving the piece, now entitled Almaladdin, a rather classical character and structure.

Albert van Veenendaal’s composition The third one is dedicated to his first godchild, Tirza. The music, reflecting the name’s meaning, expresses Van Veenendaal’s wish for the newborn: a pleasant, delightful and versatile life.

Vloeimans’ Summersault sounds, as the title suggests, like a festive flip. Michelangelo Rossi is one of Calefax’s recent discoveries: music from a time when tonality, style and forms were not yet as rigidly prescribed as in the Baroque, a century later. Rossi experimented freely in his ten keyboard toccatas, leaving the performer free to fill in or elaborate on the texture by means of ornaments and improvisation, and Calefax eagerly takes advantage of this offer. Rossi’s claim to fame, the harmonically radical Seventh Toccata, is well known in the early music world as the epitome of stylistic derring-do. Eric Vloeimans couples Rossi, by way of a solo improvisation, with the iconic Miles Davis classic Blue in Green, molded into sextet form by Oliver Boekhoorn.

Bradshaw is the somewhat pompous name for a small electric car that Eric Vloeimans once stumbled upon at London’s Heathrow Airport. Some encounters just seem to have unexpectedly poetic consequences.

The philosopher György Konrád once said that we are on our own as we go from the womb of the mother to the womb of the earth, from silence to silence. This concept forms the basis for the composition Mal de Terre by Albert van Veenendaal, who adds: ‘connected to the earth, we stand, more likely than not, on wobbling legs, thrown out of balance as we look Fate in the eye. But melancholy and tristfulness – Oliver’s beautiful duduk solo takes us by the hand – are also emotions that connect us to our innermost self. And the piece is open-ended, so...’

There is a jolly potpourri – appropriately called an ‘Ensalada’ – by Sebastian Aguilera de Heredia, one of the foremost Spanish composers of the sixteenth century. This is music that can take a knock or two. Oliver offsets the rather macho trumpet playing with an original Catalan street instrument, the tenora.

The Syrian clarinetist Kinan Azmeh is no stranger to maneuvering between various styles, from Mozart to Arabian-flavored jazz. He has previously worked with Eric Vloeimans and Calefax in separate projects, so he knows who he’s written Wedding for. Here, Oliver once again takes up the Armenian duduk.

Robert de Visée was a lutenist in the service of the French ‘Sun King’, Louis XIV. The chacone is the final movement of his lute suite in G major. Here the piece is transposed down a tone, and lends itself admirably as a ‘farewell piece’ for this CD. At the end, an extra talent of the Calefax winds is combined with the fading trumpet notes of the departing Eric Vloeimans. Off to new horizons!

Five passionate wind players. Virtuoso musicians and brilliant arrangers. The creators of a completely new genre: the reed quintet. They are a source of inspiration to a fresh generation reed players that follows in their footsteps. A classical ensemble with a pop mentality: meet Calefax.

“Calefax - five extremely gifted Dutch gents who almost made the reed quintet seem the best musical format on the planet.” – The Times –
Repertoire
The repertoire of Calefax spans many centuries of music. They breathe new life into classical chamber music by arranging it themselves to fit their own unique reed quintet line up: oboe, clarinet, saxophone, bass clarinet and bassoon. Next to that, approximately two hundred original works have by now been written especially for Calefax by composers from all over the world.

Pioneers The group publishes sheet music of their own arrangements for reed quintet under the name Calefax Edition, so that they play a pioneering role and put this new genre on the map. All over the world new reed quintets are springing up, following Calefax’ example; from Argentine to New-Zealand. By offering master classes and workshops at conservatories and universities, Calefax passes its specific methods and musical experience on to the next generations. The group also collaborates with celebrated fellow musicians from the classical music, jazz and world music scene, and with artists from other disciplines, such as choreographers and animators.

CDs Calefax has to date released 17 CDs, under the renowned German record label MDG and under their own label RIOJA Records. All of these CDs have been received by the international press with great enthusiasm. Their most recent CD, the long expected CD/DVD of J.S. Bach’s Goldberg Variations, has been awarded with five stars in Dutch newspapers de Volkskrant and de Telegraaf.

“The way in which Calefax’ five reed players give music a new look, without a trace of friction, leaves one speechless every time…” – de Volkskrant, Frits van der Waa –