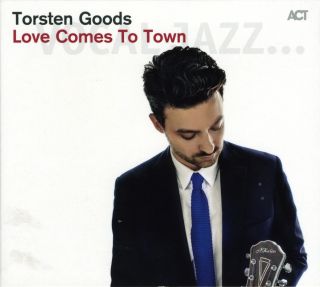 Catalog number: ACT 97262
Releasedate: 18-10-13
“Torsten Goods is someone, who is capable of the big groove”, wrote the Süddeutsche Zeitung about the guitarist, singer and composer. His style is often compared to George Benson’s. This is no coincidence, considering that he was already interested in both pop/rock and jazz as a youngster. He was born with the last name Gutknecht, but Les Paul gave Torsten Goods his alias, while he was studying in New York at the New School for Jazz and Contemporary Music. Due to the experiences he gathered in “Big Apple” and with the many concerts he has given, he has matured into a musician who understands how to write catchy songs that combine fun and musical demand. His current album “Love Comes To Town” is prove enough.
The drums provide the heavy groove, the Fender Rhodes tunes in with a resilient theme, a tender brass section fills in excitingly, then the clear soul voice resounds through the song, accompanied by the mellow sound of a jazz guitar and both support the song “You Wind Me Up” up, ending in a final improvisation. Right from the start, Torsten Goods’ CD ”Love Comes To Town” is cool, funky and energising. Since his first ACT album “Irish Heart”, a homage to his Irish mother, it has been no secret that he is an outstanding multitalent, who grew up in Franconia, matured during his studies in New York and was nurtured by the “masters of the jazz guitar” such as George Benson, Les Paul, Bireli Lagrene or Mike Stern. While the “Evening Standard” once wrote about his “talent galore”, experts couldn’t agree which to give preference to: the virtuoso guitarist, the endearing singer and entertainer or the songwriter Torsten Goods. This question is of no further interest once you have listened to “Love Comes to Town”: effortlessly mastering all these fields, Goods has never been more laid-back.

It could mainly be because Goods, who gives the impression of being an easygoing showman, is in reality a hardworking, wholehearted and introspective artist: Five years ago, after his second ACT-album “1980” and the following tour, he decided at just 28 to reexamine his fast moving career. Stepping back from further album offers for a while, he took a chance to make guest appearances with the German HR and SWR radio big bands, with Till Brönner's band as well as Larry Coryell. He left jazz territory to play R&B with Narada Michael Walden and with Sarah Connor. "I always had the urge to break out of the world of jazz a little. But after playing in big venues I knew that I belong just there but with my own projects. That’s who I am at heart”, says Goods looking back. "Love Comes To Town shows exactly who I am and what I want". His tribute to the small every day pleasures is best expressed in “Freedom Every Day”.
Another effect of his time out was that Goods has composed more than ever before. “I wrote more than 40 songs: Two years ago I spent some time in London to compose in different surroundings - working with other composers was very inspiring”. So out of this rich store he was able to create “Love Comes To Town”. From the exhilirating sunshine-and-ice café anthem “Summer Lovin’” to the driving guitar instrumental “Weekend At The A-Trane” there’s no song that hasn’t what it takes to become a standard. His seven originals easily meet the standard of the seven cover versions.

Goods knows about his qualities as a performing artist as well as a composer. However, never before has the spectrum of the material been wider: Whether you think that the easy marching version of Joe Sample’s Crusaders’-Hit “Put It Where You Want It” or the modern adaptation of Gershwin’s “They Can’t Take That Away From me” still sounds typically Torsten Goods, you would never have reckoned with a “jazz-is- in-the-air club revival version” by Willie Nelson’s country-ballad ”Night Life”. The same goes for the pop song “Right Here Waiting” by Richard Marx or Goods’ spectacular and totally reduced Blues version of Adele’s “Someone Like You”.

Goods sings the heavy soul tune “Brutal Truth” as well as his title piece with the composer: Ida Sand. Sand is only one example of the pure competence that Torsten Goods has brought on board for this project. Starting with the European “funk man“ Nils Landgren, who Goods got to know as a producer, playing on Mo Blow’s “For Those About To Funk” and who has now produced Goods’ album. Landgren heads up the guest-horn section with trumpeter Till Brönner and saxophonist Magnus Lindgren (who plays a sensational flute solo on “Put It Where You Want It”) as well as Ingolf Burkhardt, who are all hard to top in the present jazz scene. Drummer Wolfgang Haffner, Germany’s unerring “groove metronome“, and Victoria Tolstoy, whose clear voice demonstrates in two songs why she is the star she is, complete the “Landgren clan”.

Last but by no means least, Goods’ own “musical family”. As pianist, keyboarder and co-composer since way back, a good friend and companion, indispensable for Goods, the great Jan Miserre. Rounding off the rhythm section, Christian von Kaphengst is a celebrated producer, composer and arranger – Goods’ man for the low notes ever since he moved to Berlin seven years ago. Felix Lehrmann from Berlin, the young shooting star on drums, appears on one title, too. These three form Torsten Goods’ live band. Berlin! City life acts as a guiding theme throughout the album. “This wasn’t planned, it just turned out that way”, Goods says, but there is no such thing as coincidence. Berlin’s seething jazz scene including clubs like the A-Trane show an unmistakable, new influence in Torsten Goods’ music: A vital, vibrating, enviably young element, not least found in “Berlin P.M.”, the closing title of the adventure “Love Comes To Town”: An adventure that is a delight to listen to, accomplished by this mature, ambitious artist.


Torsten Gutknecht was born in 1980 in Düsseldorf, the son of a German father and an Irish mother. The family moved to Erlangen, Germany, where Torsten grew up.
Thanks to his mother’s well- stocked record collection, which included Irish folk songs alongside jazz greats ranging from Duke Ellington to Oscar Peterson, Gutknecht found an early access into the world of jazz. His first steps as a guitarist, however, were typically influenced by rock and pop. When he was 14 Gutknecht began to study in earnest. At the age of 17 he found a teacher who could instruct him in the intricacies of improvised music, the acclaimed guitarist Peter O’Mara. Torsten was 17 at the time, and his talent and enthusiasm were obvious. This quickly helped to get him into master classes with some of the greats of the guitar fraternity. While he was still in school he attended workshops given by Jim Hall and John Scofield in New York, and took lessons with the virtuoso gypsy guitarist Bireli Lagrene in Strasbourg, France. This last experience was a major influence on his development.

In 2001 as a 20 year old Gutknecht travelled to New York with a stipend to study at the prestigious New York New School where he studied with Jack Wilkins and Vic Juris. But it was even more important for Torsten to plunge into the musical life of the "Big Apple". He worked with Seleno Clarke, Barbara Tucker, Reverend Run (from Run DMC), and met George Benson, a major influence who inspired Gutknecht to sing along with his playing. He was also able to perform with guitar legend Les Paul, who also gave him his artist name "Torsten Goods".

Before his stay in New York, Goods had been working with no less energy and determination in Germany. In 2000 he became a member of the German Youth Jazz Orchestra under the direction of Peter Herbolzheimer, and shortly thereafter – before his graduation – he recorded the first album under his own name, in 2001, "Manhattan Walls" (Jardis), with Tony Lakatos, Davide Petrocca, Dejan Terzic, Guido May, Jan Eschke, Andreas Kurz, and Rick Keller.

In 2004 there followed "Steppin" (Jazz4ever). His band at that time, which consisted of Jan Miserre, Marco Kühnl, and Christoph Huber, was augmented by crack German players Olaf Polziehn, Martin Gjakonovski, Dejan Terzic, Tony Lakotos, Johannes Enders, and Lutz Häfner. The album was nominated for the German Record Critics’ Award, and international critics acclaimed Goods as an "emerging new force in the jazz scene". Shortly after, in 2005 Goods was the only European to be chosen by Herbie Hancock and Wayne Shorter for the final round of the "Thelonious Monk Jazz Guitar Competition" in Washington D.C. Since then Torsten Goods has been touring extensively throughout Europe, Asia, and the USA. During this period he has worked with the likes of Bob James,

In 2006 Goods began to work exclusively as an artist for ACT. His ACT debut, "Irish Heart" (ACT 9714-2) on which he delves into his Irish roots, marked a decisive breakthrough: not only did it introduce him wider public, first and foremost he became recognized as a singer. Goods is not only equipped with a virtuoso guitar technique – he also has an exceptionally sensitive and expressive singing voice that is at home with the blues as well as swing and pop. The "Irish Heart" tour took him through not only Germany, it also brought him invitations to some of the major European festivals such as the Paris Jazz Festival, Jazz Baltica, the Leverkusen Jazz Days, Burghausen Jazz Weeks, JazzKaar Estonia, the Pure Jazz Festival in Den Haag, the Traumzeit-Festival and Competitions in Brussels as well as the London International Jazz Competition, the Montreux Jazz Guitar Competition, and the European Guitar Award in Dresden.

With his second ACT album, "1980" (ACT 9719-2), Goods once again substantially extends the range of his music. With adaptations of the works of outstanding artists from 1980 (the year Goods was born) along with his own compositions, Goods follows on the tracks of such great jazz guitarists and singers as Al Jarreau and Michael Bublé.

In June 2013 the long-awaited fifth album "Love Comes To Town" (ACT 9726-2) was released on ACT. The new CD was produced by Nils Landgren. Besides him other well-known guests like Till Brönner, Wolfgang Haffner, Magnus Lindgren, Ida Sand and Viktoria Tolstoy appear on the album. On "Love Comes To Town" Torsten Goods refers to his musical roots in blues, jazz and R&B while simultaneously focusing on the future as a matured artist. The album was well received in Germany for its groovy pop jazz-sound that was even compared to George Benson.