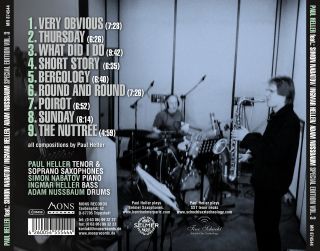 Catalog number: MR 874544
Releasedate: 11-05-13
Sometimes even a musician’s life can turn out to be a dream concert. The Cologne saxophonist Paul Heller is one of those who has so far fulfilled all of his wishes regarding fellow musicians, and this remains the case with his latest recording. But first, let’s take a step back to 2011. The first album in his series “Special Edition Vol 1” was played with the Dutch drummer John Engels. When recording the second album in the series, Heller managed to get the American drumming legend Al Foster on board (fulfilling a childhood dream in the process). His latest guest list also includes prominent and exciting names from the world of jazz. For the new album, Heller won over the pianist Simon Nabatov, whose expressive playing enjoys an international reputation far beyond the boundaries of jazz. Paul’s brother Ingmar Heller plays the bass; while a permanent member of the NDR Big Band, Ingmar’s musical abilities are also regularly demonstrated within smaller lineups. Heller’s current quartet is completed by the American veteran Adam Nussbaum on drums, a man who has kept the beat for greats such as Stan Getz, Michael Brecker and John Scofield.