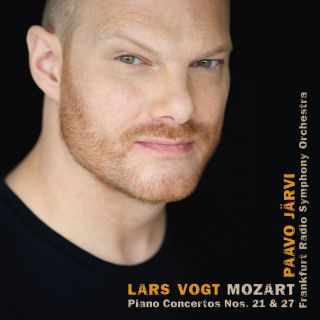 Catalog number: AVI 8553296
Releasedate: 11-10-13
Lars Vogt – Paavo Järvi - MOZART
Vienna 1785: Wolfgang Amadeus would compose in his workroom and music seemed to flow from his
pen. Soon he would write the opera Le Nozze di Figaro in these same quarters. He had just put the finishing
touches on a new piano concerto: festive C Major, luxurious scoring including trumpets and timpani (K467). It
was premièred on 12 March 1785 during one of the so-called “academy” concerts. Leopold, the father, was
present and could hardly curb his enthusiasm: “The concerto was sensational, the orchestra first-rate”, he wrote
to his daughter. He was also impressed by the music’s sheer technical difficulty: “Here, the pianist truly has
something to keep his hands moving: one has to concede that this new concerto is surprisingly difficult”.
However, this is not a work where Mozart lay particular emphasis on virtuoso aplomb; rather, the C-Major-
Concerto draws its energy from “cheerful, open-hearted joy”, as Lars Vogt puts it, “at least in the outer
movements. The middle movement, the well-known Andante, seems to contain a vision of paradise – this is an
absolutely moving piece of music, provided one manages to create the illusion that it emerges out of
nothingness”. Here, once more, we have the ingenious “Mozart Effect”: a beauty plain and simple, without ever
descending into vulgarity. … When he was working on the first movement cadenza, his daughter – then four
years old – was attempting to conquer the piano keys. A short little melody emerged from her first attempts,
“and I incorporated it into my cadenza, concealing it at one point in the left-hand part”.
Vienna 1791: “Piano Concerto K595 in B Flat Major is from 1791, the last year of Mozart’s life. Long gone
were those blissful days in the lovely Domgasse quarters. Mozart’s star was shining less brightly now, and luxury
had to be curbed. Vienna had laid at his feet, now it had found new favorites. Mozart was no longer able to
finance his “academy” concerts from his own pocket. The only musical commissions he received in early 1791
were a few meagre tasks including a series of dances for court ballrooms. But Mozart nevertheless finished
writing his Concerto in B Flat Major. Whether it was performed by the composer or by a female pupil remains
unknown: our most important biographical source, the lively correspondence with his father, had run dry four
years earlier. “For me, this concerto is tinged with melancholy through and through. One can tell that this is his
last piano concerto – even in the supposedly cheerful themes, as in the last movement. The mood becomes
increasingly con spirito”. Thus, Lars Vogt attempts here to explore the mood of “crying while laughing”, since the
piano part foregoes any sort of finery or aplomb. “It draws its energy from inner expression”. The orchestration is
also less flamboyant: Mozart leaves out the timpani and trumpets this time…..