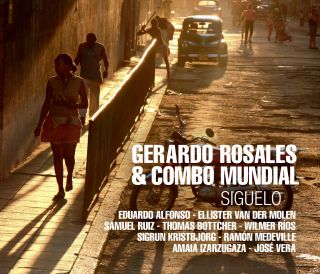 Catalog number: CR 73364
Releasedate: 15-11-13
"Everyone that knows my work can appreciate the evolution and changes I have made. Nevertheless, my musical line is clear and concrete; I’ve been influenced by other cultures, but my specialty is the salsa. I do have to make it clear that when I talk about salsa, I don’t mean the dance that people learn in a superficial way on dance academies. I was born in Caracas, Venezuela, one of the countries responsible for the development and dissemination of this music in the world. I witnessed the birth and development of this genre. Cuba is the mother of what we call salsa, because the son, the mambo, the guaracha, the cha cha cha, the guaguancó and the pattern of the clave are the origin of everything. I have a collection of 5000 vinyl records, audio cassettes and historical documents that I keep close by; they are my treasure and the fundamental base of what I bring into the world. This album is the more danceable and spontaneous I have ever produced. The musicians involved in it have a very positive energy, full of talent, wisdom and spirituality, all contributing to their knowledge so that you have a quality product.

Cleaning up my house in The Hague, in January 2013, at the bottom of a box I found, to my surprise, the original scores of the songs “¡Ahí, Na’ma!” and “Lágrimas Negras”, written by the pianist Roberto Gonzalez†, who made me these arrangements in 1990, when I was living in Caracas. From the same box came songs like “Siguelo! and “El Rincón” So I thought: “I have to bring this music out. It can not stay in this box.” I immediately started to gather musicians and rehearse. Every last Sunday of the month we play at a club called Havana in The Hague and from there we see the public reaction. Everyone dances fanatically to each song we play.
I have been very sharp with the concept. We recorded together like it used to be in the 70’s, we used a conga and bongo in Arsenio Rodriguez style, the drums are made of wood and cow leather, the bells used are an older model of the LP, they sound like Roberto Roena bells recorded at the time of the Fania, maracas, clave and gourds were executed separately, the timbales was used in “Cha Cha Cha Pachangas” and also in the two salsa styles. We recorded merengue as Billos Orchestra played in the 50s era, also play gourds and Dominican tambourine to giving the traditional sound, the baby bass we use gives a deep sound similar to the “Dimension Latina” or “Conjunto Libre”. The sound of an acoustic piano is essential, we use a fender rhodes on a song which refreshes the era of the 60s. This album is mixed with digital technology but analog processors were used. We wanted to be faithful to the genre and bring out a natural sound, without misusing the technology and effects. Maturity has reached at this stage of my life and we have produced an album of which I am proud. I leave this sentence, the result of the moral I learned: “The greatness of Latin music is in its simplicity”."

Gerardo Rosales began his musical career at the end of the '70s. In Venezuela, he was percussionist in the major orchestras of his country. In 1992, he set up his base in Europe and has since toured worldwide.

He has recorded 16 CDs with his band and over 70 CDs with other artists. He specializes in Latin Jazz, Salsa and Cuban, Venezuelan and Caribbean rhythms.

He has founded important projects like Venezuelan Masters Orchestra, Charanga La Crisis, Our Latin Groove, Rumbistico, Cachao Sounds and others.