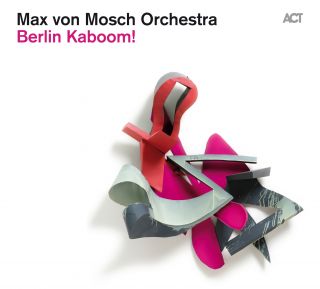 Catalog number: ACT 95592
Releasedate: 27-09-13
When a young jazz musician composes a suite and calls it "Berlin Kaboom!", it calls to mind the many young guns in the German capital's jazz scene. Saxophonist Max von Mosch, who does exactly this with his first own ACT album, has only lived in Berlin for two years, and despite being just 33 years of age, he is already an old hand and figurehead of German jazz.

His career to date is inseparably linked to the name max.bab, the quartet that Max von Mosch founded in 2000 together with a trio of friends from his school big-band: pianist Benedikt Jahnel, bassist Benjamin Schäfer and drummer Andi Haberl. They achieved immediate success by winning the national youth jazz competition "Jugend jazzt", and were from then on seen as the next big hope of German jazz. And rightly so, international accolades followed, famous colleagues such as Charlie Mariano, Wolfgang Muthspiel and Klaus Doldinger came to meet and greet, and today the four young talents have recorded seven CDs, the one before last entitled "Inner Orbit" in the ACT series "Young German Jazz".

Max.bab and Max von Mosch typify the young German jazz generation with their professionalism, academicism and institutionalisation of jazz music. Their journey took them from school big bands to the state and national youth jazz orchestras, then on to the numerous jazz departments at music conservatories, and from there overseas. Max von Mosch travelled more than most: He studied in Berlin and Amsterdam, then moved to Canada and the USA to the Manhattan School in New York, then studied for a doctorate at the New England Conservatory in Boston. Step by step, Mosch intensified his passion for composition, and in that he also stands for the current trend that borrows from all genres of music, from classic to rock, and in which the technical craft is only seen as the foundation for "what it actually is".

And so it is that Mosch's style has quickly become unmistakable: melody, harmony and dynamism are all equally important to him, American tradition and Scandinavian modernity go hand-in-hand, but most of all he loves the big arc that turns his songs into suites. It has become so complex that the ten-piece band has emerged as the ideal band for him. "It is a format that is strong enough to sound like a big band, but at the same time it is flexible," Mosch explains.

The Max von Mosch Orchestra has been in existence since 2006, initially comprising of friends from the New York scene. The 2011 album "Black Perigord" delivered a lucid, iridescent, weightlessly swinging summary of this phase in his career.
Since moving to Berlin, Mosch has put the next generation of this orchestra together and found a team – recruited from the three jazz capitals of Germany: Berlin, Cologne and Munich – that is more or less an all-star band of young German jazz. He has surrounded himself with outstanding talents such as Berlin saxophonist Christian Weidner, trumpeter Andy Haderer (WDR lead trumpeter) and Matthias Schriefl (ACT artist and artist in residence at the South Tyrol Jazz Festival), baritone saxophonist Gregor Bürger and trombonist Klaus Heidenreich, and the rhythm section comprises nothing but Echo Jazz winners, with pianist Christian Elsässer and the inseparable duo Robert Landfermann on bass and drummer Jonas Burgwinkel. Only the Australian star trombonist Adrian Mears comes from the next age-group up.

Just what an incredible feel these ten have for space and sound becomes immediatelly apparent in the first number on the album "Space Walk", which space-travel fan Mosch dedicates to the first ever space walk of an astronaut. That they can mix in any timbre and handle any rhythm change can be heard in "Ballet of the Gnomes" in which Stravinsky, Ellington and Stan Kenton can be clearly recognised, and "Kazakhstan", which is interlaced with melancholy-archaic tour impressions. Everything that belongs to the composition of contemporary melodic-orchestral jazz can be found in the three-part work "Berlin Kaboom!": the compelling structure and the dynamic loop-through of the theme, as was invented in Scandinavia ("Pretty but untamed"); the peace and quiet that lies in the view by night over the bustle of a big city ("Dark Sheen"); and finally the exuberant power that unites all the opposites, all the époques and styles with each other ("Rugged").

That "Berlin Kaboom!" sounds so stirring and alive is also due in part to the fact that it is not a calculated or cerebral studio production. The "Jazz Summer Week" in Munich's Unterfahrt jazz club provided the ideal environment to record the album live. Bigger ensembles are the trend right now. This one shows why.