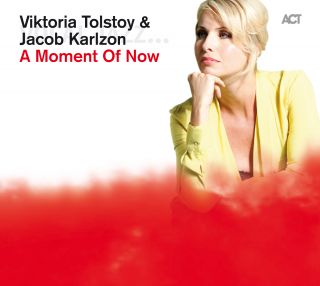 A Moment of Now


Though there are many beautiful singing voices in jazz today, Viktoria Tolstoy is one of a kind. A great melodramatist of jazz who is also bipolar, she makes happiness sound fragile and threatened, and bitterness sweet and enchanting. She has framed and perfected this art on a conceptual level since becoming an ACT artist in 2003, whether concentrating on material from Esbjörn Svensson – whose e.s.t. began to some extent as her accompanying trio – or, most recently, on Herbie Hancock, classical originals, Swedish standards or repertoire from Russia, the home of her ancestors.

Her latest album "A Moment Of Now" is her most frank recording yet – for one simple reason: "Jacob [Karlzon] and I are the concept this time," says Viktoria. Indeed it is an intimate album by the duo that focuses on their musical partnership. Karlzon has been Tolstoy's trusted companion on her band projects for almost 15 years now, his playing thrives on nuances, transitions, ambiguities – be they inspired by classics such as Grieg or hard rockers the likes of KoRn. It is a partnership that shows no signs of abating, despite Karlzon’s own highly successful trio that bears his name. "We each generally know in advance what the other is thinking and is going to do, without either of us having to say anything. It's almost a bit spooky," says Tolstoy of the intuitive understanding between the two.
Their style depends on melodies like a fish depends on water, and 14 of the best are brought together on "A Moment Of Now". As Tolstoy explains, they are "songs we've heard a lot in recent years, and that imposed themselves on us, but also some that were entirely new to us and were really a challenge”. This has resulted in a selection that sounds entirely coherent and as if created especially for these two musicians, even though its component parts come from the most diverse, stylistic, and often surprising backgrounds. From the classical "Apres Un Reve" by the Frenchman Gabriel Faurè, to Stevie Wonder's soul-pop "Send One Your Love" – on which Tolstoy invited Jocke Bergström, a new face in these climes, to share in a vocal duet that simply takes your breath away – to the jazzy "Shadow And Light" by Joe Zawinul.

Thanks to Tolstoy's father, who suggested Phil Collins' "Against All Odds", the entire history of Genesis is represented, so to speak, with "Taking It All Too Hard" and Peter Gabriel's "Red Rain" also rebooted on the album.

Beyond global hits like these or Alanis Morissette's biggest success "Hand In My Pocket", the album also includes new discoveries like "Satisfied" from the almost-forgotten funk virtuoso Lewis Taylor and "Deep River" from Norwegian jazz saxophonist Benedik Hofseth. Among the pieces, three were originally instrumentals; namely "Apres Un Reve" (based on Faurè's "Apres Un Reve"), the Pat Metheny revamp "A Moment Of Now", and Karlzon's own composition "Scent Of Snow”. For these, Anna Alerstedt, the fantastic songwriter who Tolstoy discovered in 2008 for "My Russian Soul", once again pens profound and memorable lyrics.

The ease with which Viktoria Tolstoy and Jacob Karlzon can change the fundamental character of songs that otherwise seem to be set in stone is quite spectacular. The best example of this is their interpretation of Mark King's "Lessons In Love", transformed from a loud up-tempo song by the funk band Level 42 into a melancholy ballad. There’s also Cole Porter's classic "I Concentrate On You", which rings out as a Nordic anthem, and which in the middle section is even reminiscent of Esbjörn Svensson's "Love Is Real". But above all, what the songs all have in common is an overwhelming quietude and power. The weighty and complex sounds light and easy – just note the jumps and key changes on "Satisfied", where the subtle nuances and vocals change and shape the music.
There is a calmness and strength in the music that comes from experience and draws from the tried and trusted. For example, Nils Landgren returns as the producer, while the album was recorded with the familial team at Nilento Studios in Goteborg. "I felt safe and well looked after at every moment,” Tolstoy recalls, “Never change a winning team!". This is how a fascinating and completely unique moment in her and Karlzon's oeuvre was born—and it is one that will remain.

The Swedish singer Viktoria Tolstoy was born in the small town of Sigtuna, near Stockholm, in 1974, but she has Russian blood in her veins. Her great-grandfather, the son of the world-famous writer Leo Tolstoy, grew up in Tsarist Russia. He suffered from a nervous illness, sought medical help from a famous Swedish specialist, fell in love with the specialist’s daughter, married her and settled in Sweden at the end of the 19th century. Since then the ancestors of Viktoria, the great-great-granddaughter of the legendary novelist, have lived in Sweden.

Viktoria’s childhood and adolescence were spent in Uppsala. Her father, a Swedish jazz musician, took his daughter’s musical education into his own hands, and introduced her to the world of jazz. In the mid 1990’s, while performing at a Stockholm club, she was discovered by a record company and offered a recording contract. Her debut album Smile, Love and Spice – for which her father wrote several of the tracks – immediately attracted the attention of the circle of leading Swedish jazz musicians, such as Arne Domnerus, Putte Wickman and Svante Thuresson.

Less than two years later, her strongly pop-oriented album För Älskad – Too Loved hurled her to the top of the charts, and made her a star at home almost overnight.
In 1997, the then only 22 year-old Tolstoy recorded the phenomenal White Russian. The melodious pop jazz on this album established her place in the charts as a star in Sweden. She had written the music together with her compatriot Esbjörn Svensson (who was also the producer of the album) and they performed together with his trio e.s.t. Soon afterwards Viktoria Tolstoy accompanied e.s.t. on their first German tour.
Next, Viktoria performed worldwide with jazz greats such as Ray Brown and McCoy Tyner and concentrated mainly on developing her career in Sweden. In 2000 she released a selection of jazz standards with her quartet, which were published under the title Blame It On My Youth.

Nils Landgren had already featured her as a guest on his Funk Unit album 5000 Miles (ACT 9271-2) in 1999, and three years later Tolstoy could again be heard on his ballads album Sentimental Journey (ACT 9409-2). Since the end of 2003 she has been exclusively signed to ACT. In February 2004 she released her ACT debut album Shining on You (ACT 9701-2). Within a week it reached number 2 in the Swedish jazz charts and number 26 in the pop charts.

The songs – “incredibly beautiful and intimate melodies” (FonoForum) – again all originated from the pen of Esbjörn Svensson. Nils Landgren produced this successful album, which in the same year received a German Jazz Award. The press raved about her voice “as clear as glass, simply wonderful” (taz), “unpretentiously natural, with a light, smoky timbre” (Hamburger Abendblatt) and praised her as a “master of ‘less is often more’” (FonoForum).

Tolstoy toured for a whole year all over Europe with her own show, supported the Nils Landgren Funk Unit with two songs on the album Funky ABBA (ACT 9430-2) including the incredible “When all is said and done” with none other than Benny Andersson himself on the piano, and accompanied the band on the Funky ABBA tour of China.
In April 2005 Tolstoy released her second album on ACT: My Swedish Heart (ACT 9705-2). It’s an expression of love and a tribute to 50 years of “Jazz made in Sweden”. The selection of songs ranges from compositions by Jan Johansson or Lars Gullin and freshly treated traditionals - among them the folksong “Jag Vet en Dejlig Rosa” that was made famous by Monica Zetterlund’s 1964 recording with the Bill Evans Trio - to compositions by Viktorias friends and colleagues Esbjörn Svensson, Lars Danielsson, Anders Jormin and Jacob Karlzon. The Süddeutsche Zeitung called the album - which reached number 1 in the Swedish and number 2 in the German jazz charts, and was a huge success on extended tours of Europe and Canada - an „elegant balancing act between Scandinavian folk and jazz“.

Her third ACT-album Pictures Of Me (ACT 9712-2), released in October 2006, is another example of her versatility, and it is full of surprising and personal interpretations of famous (and less famous) pop songs by Paul Simon, Prince, Peter Gabriel, Stevie Wonder, a.o. Viktoria Tolstoy, her long time piano player Jacob Karlzon and her current producer, the wonderful bass player and cellist Lars Danielsson have found wonderful arrangements for their convincing adaptations. With Pictures of Me, Tolstoy entered the Swedish album chart at #27.

For many years now, Viktoria Tolstoy has been keen to explore her Russian musical roots. Together with ACT colleague Nils Landgren, producer already on her first two albums, Tolstoy finally dared to attempt this undertaking and managed to make a modern kaleidoscope of Russian music by bringing out My Russian Soul (ACT 9721-2, release date: October 2008). It was created with the incorruptible perspective of an artist, who gets to the bottom of her musical visions as well as her soul.

The ACT Signature Edition, released in April 2011, gives an impressive overview of Viktoria Tolstoy’s artistic career to date: two CDs with a total of 24 tracks document her path as one of the most defining and successful artists of European jazz.

Letters to Herbie (ACT 9519-2), released in September 2011, is dedicated to one of Viktoria Tolstoy’s greatest inspirations: the music of American pianist and composer Herbie Hancock. Its soulful grooving songs, particularly from the 80s, gives Viktoria Tolstoy, together with producer Nils Landgren, a totally new and unmistakable sound between jazz, soul and pop.

With A Moment Of Now (Release: November 2013) Viktoria Tolstoy and Pianist Jacob Karlzon create 14 fascinating and magical moments that will remain in the listeners ears for long. In an intimate duo setting the two change the fundamental character of carefully selected songs from Jazz, Pop and Rock.