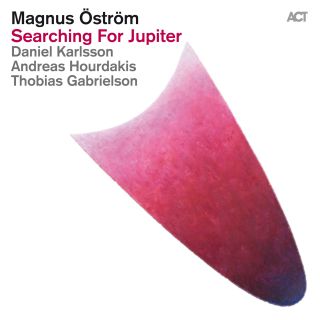 Catalog number: ACT 95411
Releasedate: 11-10-13
“What an utterly beautiful and compelling album this is. The playing is immaculate, the compositions truly inspired, the arrangements magical”, said BBC Radio 3 of “Thread Of Life”, the debut of Öström as leader. The follow-up “Searching For Jupiter” is not less persuading with its connection of jazz with electronic and progressive rock elements plus the unique grooves of the drummer.
Jupiter was the King of all the Gods for the Romans: the Heavenly Father, the bringer of light. It was him you invoked when the goddess of fate had unexpectedly intervened in your life. So it was with the Swedish drummer Magnus Öström, who was dealt a stroke of fate almost five years ago when his close friend, the pianist Esbjörn Svensson, was killed in an accident. They had revolutionised the jazz world since 1993 with e.s.t. - the Esbjörn Svensson Trio.

It took two years for Öström to find his way back to music after that tragic event, and to bring out his first own album: "Thread of Life". It is a work of mourning, adorned with melancholy, that seeks its own path, falling back on art-rock and electronic elements and a closer link to sounds than melodies. "A jazz band that bathes in rock with everything it has" is what Jazz thing heard on this album. Which also proves how important Öströms incomparable drumming is for the e.s.t. style – as precise as a metronome, and yet with a feverish groove and surprising use of the brushes. It was so impressive in doing so, that Öström won the 2012 Echo Jazz Award for Best International Drummer. BBC Radio 3 said of Öströms post-e.s.t. oeuvre on ACT: "What an utterly beautiful and compelling album this is. The playing is immaculate, the compositions truly inspired, the arrangements magical." And the German rock magazine eclipsed gushed: "Here, a musician has transcended himself in a gigantic apotheosis."

Öström now presents his follow-up "Searching For Jupiter". His loss is still palpable in heavy, yearning tracks like "Mary Jane Doesn't Live Here Anymore" or "Hour Of The Wolf", but Öström has taken some decisive steps forward: He now has a strong and tight band together with guitarist Andreas Hourdakis, bassist Thobias Gabrielson and pianist Daniel Karlsson, who is well known from the jazz-fusion band Oddjob. They have rigorously pursued a jazz rock and progressive rock leaning - "The Moon (And The Air It Moves)", for example, is reminiscent of Pink Floyd not only in name, and there is more optimism again: Melodies once again play an important role ("Dancing At The Dutchtreat"), even major-key cheerfulness shines through from time to time ("Happy And The Fall"), and the album ends with an anthem of hope with "At The End Of Eternity".

Magnus Öström is pretty close to making his peace with the bringer of light, Jupiter.

Magnus Öström was born on May 3rd, 1965 in Skultuna, Sweden as second son to local painter Arne and Siv Öström. His brother Tommy was three years older and influenced Magnus in his early years with his eclectic record collection including Jimmy Hendrix, Deep Purple, Almond Brothers and Lynyrd Skynyrd. At the age of eight Magnus built his first drumkit out of his fathers empty paintcans and only a year later he started his first band together with a kid from across the street, Esbjörn Svensson. Magnus received his first real drumkit only one year later as a christmas present. Another year later he performed his first concert. The band was called ”Beware Of The Beginners”.

In 1978 his brother took him to a concert of Billy Cobham with John McLaughlin. This experience turned his musical world upside down and got him into jazzrock. Aged 13 to 16 Magnus had several bands simultaneously together with Esbjörn Svensson playing all different styles, from dance-music to punk. From 1981 to 1983 Magnus studied at the music highschool (Gymnasium) in Västerås. During those years Esbjörn and Magnus had their first trio together. From 1983 to 1985 he then studied music at Sjöviks folk high-school.

In 1985 Magnus moved to Stockholm to study at the Royal Conservatory of Music. He immediately started to play in different bands on Stockholm ́s jazz scene. Between 1987 and 1992 he was a constant member of Monica Borrfors band, a well-known Swedish jazz vocalist who played mainly jazz standards and together they toured extensively throughout Sweden and beyond. ”Playing live, especially with a singer is the best school in the world for a young drummer”, he says.

In 1989 after a break of a few years Magnus and Esbjörn hooked up again and started jamming together. They formed a band called ”Stock Street B”. The setup included - amoung other gadgets - samplers and octapads with sampled vocals. ”It was too early for that kind of thing. No one understood what we were doing, really. They thought we were playing to backing-tracks but everything we did was live...!”

In 1991 him and Esbjörn started the predecessor to e.s.t. and in 1992 Dan Berglund joined on bass. Together they recorded 12 albums and one concert DVD, toured the world several times over, sold hundreds of thousands of albums, and were titled the ”trio of the decade”. Nowadays e.s.t. are considered to have been the most influential band in jazz in the Noughties and their album ”Live in Hamburg” (ACT 6002-2) has been awarded ”Album of the Decade” by no lesser than the London Times. The career of e.s.t. came to a sudden, tragic end when Esbjörn Svensson died in a scuba diving accident on June 14, 2008.

Three years later, on Februar 25, 2011, Magnus Öström released “Thread of Life” (ACT 9525-2) – his debut as a leader and his first (musical) sign of life after the tragedy. Its haunting, dark music, drawing inspiration from jazz, progressive rock, drum’n’bass and minimal music was Öströms attempt of coping with the huge loss. On the song “Ballad for E”, Magnus Öström and Dan Berglund played together in the studio for the first time after Svenssons death – accompanied by the great e.s.t. fan Pat Metheny.

In July 2011, the German JazzBaltica Festival is paying tribute to Esbjörn Svensson and e.s.t. .

The highlight of the festival is an evening with music by and for Esbjörn Svensson, on which Magnus Öström not only performed with his “Thread of Life” band but also was hosting the programme.

In 2012, Magnus Öström received the „Echo Jazz“, Germany’s most important music award, as „best drummer international“ for „Thread of Life“. His performance of piece “Tears for Esbjörn”, together with pianist Iiro Rantala was an emotional peak of the award ceremony.

Four years after the death of Esbjörn Svensson, on March 30, 2012 with „301“ (ACT 9029-2) a new e.s.t. album was released – with previously unreleased studio material, produced by Magnus Öström and Dan Berglund. The album made it to #53 of the German popcharts and #1 of the jazzcharts. Also, since the release of “Liberetto” (ACT 9520-2) in February 2012, Magnus Öström is a permanent member of the band of bassist Lars Danielsson.