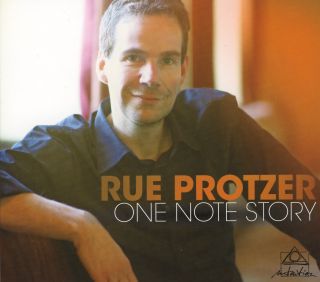 Catalog number: INT 34392
Releasedate: 15-11-13
As one of the very few jazz musicians, Rue Protzer uses a Fender Stratocaster throughout this new album. This is a guitar, which can usually be found in rock music, and which consequently provides a very unusual jazz sound.
Rue Protzer caught the lasting attention of the press and general public with his trilogy in the years 2006 to 2009. With his band "Rue de Paris" in which Marc Johnson, Adam Nussbaum, Randy Brecker and Lee Konitz participated, among others, he released "Quiet Motion" (Sony), "New York Slow" (Sony) and "Trois" (Intuition). After he completed that project, Protzer took a lot of time to develop his new music statement. While the trilogy mainly followed peaceful and contemplative paths, a rhythmic about-face has now followed. The first song ("Funky Funky") already makes it clear where this journey is going. However, neither this song nor the first sounds should lead you astray into expecting pulsating, simple and popular funk designed for the dance floor. When you listen carefully, you realize that refined offbeats and finely chiseled changes of focal points are behind the strong rhythms. You discover that the melodies are strong and that you can even sing along, but they are still filled with refinements. In addition, the harmonies are woven with anything but uninspired patterns. The handpicked musicians are only able to start on their soloist excursions with this basis. This applies above all to the ballads, which display Protzer's power of composition to a very special degree once again. At the end of the CD, you are surprised to have discovered that funk jazz in this form not only has an infectious rhythm, but that it can also be very relaxed and relaxing. "There are many pieces in irregular meters on this album. I considered it very important that they do not sound like figments of imagination, but that they also work for producing a gut feeling, i.e., are convincing on an emotional level," Rue Protzer said.

Rue Protzer from the south of Germany has earned an excellent reputation both in the studio and live music scenes. After studies in Nuremberg, he regularly attended master classes and workshops in the USA and developed his very own sound on his instrument in the process. He plays both acoustic and electric guitar on "One Note Story". Remarkable: As one of the very few jazz musicians, he uses a Fender Stratocaster throughout this new album. This guitar model became known thanks to Hendrix's Woodstock performance and his "Star Spangled Banner" and became a standard rock instrument as a result. Even if Wayne Krantz and above all Hiram Bullock play a "Strat" at times, Protzer provides a very unusual jazz sound with it.  He commented on this: "I love the unique vitality and dynamics of the 'Strat' and simply wanted to try it out for myself in a jazz context."
Protzer has always enjoyed a good reputation among co-musicians, so it is not surprising that he was able to recruit the best in their fields for this new production. Lutz Häfner, newly awarded Echo Jazz prizewinner has not just been among the best German saxophonists since receiving this honor and shines not just thanks to his gripping but warm sound. He also arranged the wind instrument movements. Sebastian Studnitzky is also involved in them, to which he adds his unmistakable, soft trumpet sound. "In addition to his unique sound, I above all appreciate that Sebastian is open to many genres of music and plays with unbelievable good taste in the process," Rue Protzer underlined his choice of the amiable trumpet player.

He has long outgrown the category of musicians, who need to present a "played-with list", although his would be impressive. The bassist is the pulsating heart of every music and is especially important when e-bass is required in jazz. Patrick Scales was the logical choice here; co-musicians Pee Wee Ellis to Klaus Doldinger are aware of his special skill. Jesse Milliner, educated in Essen, Cologne and at the Manhattan School of Music as well as winner of the WDR Jazz Prize, is head of the jazz department of Mainz Music College today. His years in the USA have left clear traces on him – and on this CD. The latter are of course also to be expected from the Austrian Christian Lettner. He has been the drummer in Doldinger's Passport since 2000 and also in the band of Joo Kraus for almost 10 years. He's not one to beat his way to the forefront, but instead plays in the service of the sound and – yes! – melodically. Rue Protzer: "I was simply happy when all agreed to participate and we could go into the studio with this dream team to record "One Note Story" together. And: We really had a lot of fun doing it!"