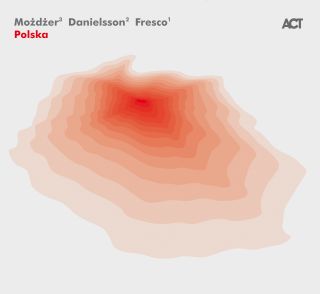 Catalog number: ACT 9557
Releasedate: 31-10-13
The Pole Leszek Możdżer is "a phenomenon" (Süddeutsche Zeitung). "His finely grained virtuosity is fascinating entertainment that is unrivalled in the contemporary piano craft" (FAZ). Already a star in his homeland, and in Europe the most important Polish jazz musician of his generation after Tomasz Stańko, the 42 year-old pianist from Danzig is the embodiment of the current journey of European jazz. A journey back to its roots, and at the same time to new shores: a classical education, the awareness of the own musical tradition, is almost always the basis for exploring one's own worlds of sound with masterly technique. And so it is with Możdżer, who didn't discover jazz until he was 18, to then quickly combine it with other forms. A distinctly individual sound resulted, a personal form of expression that is unmistakably infused with Polish music traditions: Chopin, the national hero of Polish music, is always woven in – audible also in the introduction to "Polska" with "Chai Peimot". But also modern Polish composers, all the way through to pop music, inspire him. Witold Lutoslawski, for example, who has written both complex symphonic works and popular chart hits. Or Krzystof Komeda, to whom Możdżer paid tribute on his most recent ACT album "Komeda".

One advantage Możdżer has over his colleagues from other countries is that his language is understood, most importantly by his compatriots. His genre-crossing music enjoys phenomenal success in his home country, reaching all kinds of audiences. Even his solo concerts there are held in major venues. When he invites guest stars like Marcus Miller or John Scofield, as he did for his "Możdżer " concert in 2010, tens of thousands of people come to listen. At his 2008 concert in the Danzig shipyard with Pink Floyd frontman David Gilmore there was an audience of 60,000. His albums have long found their home in the Polish charts: "Komeda" even made number one in the pop charts in 2011 – ahead of Sting and Beyonce. With his extravagant glasses and hairdos Możdżer even looks more like a pop star than a jazz musician.

The fact that the interest – yes even admiration – is growing in Germany and other countries as well and the concert halls are getting bigger – at the opening to "Jazz at Berlin Philharmonic", for example, Berlin's Chamber Music Hall was sold out – is clearly due to what "Polska" once again impressively demonstrates: Możdżer's singular ability to combine the heavy with the light. Despite breath-taking improvisations and strongly contrapuntal and directionally opposed compositions, his music always remains understandable and catchy. Możdżer has a talent for the interplay of rhythm and harmony with melodies – so it comes as no surprise that he has done a lot of work for theatre and film in Poland. Just lend an ear to the title track of the new album: a lightly chromatic, "Slavic" bass figure passes through the entire piece, forming the foundation for the weightless, ever more intertwined lines and the hymnal, improvisationally varied theme. It's all in there: classic, jazz and pop; all complementing and enriching each other.

"Polska" would not sound the way it does, if it had not been born in a trio with the Swedish bassist Lars Danielsson and the Israeli percussionist and singer Zohar Fresco. Możdżer found these soul mates ten years ago: the two already showed themselves to be a dream team of intuitive ensemble playing on the Danielsson albums "Pasodoble" (as a duo) and "Tarantella". And Danielsson is not only one of the best jazz bassists (and cellists!) in the world, he also has similar compositional preferences to Możdżer, which can be heard here on his tracks "Africa" and the touching "Spirit". As a member of "Bustan Abraham", "Ziryab" and "Noah", Fresco is one of the Israeli pioneers who began in the eighties joining music from the west with music from the east, Arabian with European. Unperceived here, these three have already recorded two albums in Poland that went double platinum (just like the recent "Komeda")!

Now, no matter where you are, with "Polska" you can discover one of the most fascinating and extraordinary trios in the world with Leszek Możdżer as its creative mastermind. One that sweeps you away with the pulsating "KarMa Party" or simply enchants with the balladesque "Norgon", and one that with the aid of the Polish Symphony Orchestra knows how to provide a grand finale, with a version of Jimi Hendrix' "Are You Experienced?".

Leszek Możdżer, born 1971, is regarded as the most important discovery in Polish jazz during the past 10 years. His international reputation as one of the outstanding pianists in jazz is founded on his groundbreaking and smooth interweaving of sound aesthetics and mixing the culture of classical music with the openness and energy of jazz. He became famous as the romanticist among the European jazz pianists for his improvisations on themes by Frédéric Chopin, and his sparkling and technically unrivalled playing style has been connected to lyrical and emotional melodies ever since.

Możdżer didn't start playing jazz until he was 18, but he managed to build up his reputation remarkably quickly and was soon collaborating with the most important musicians in contemporary Polish jazz, such as Tomasz Stanko and Michal Urbaniak. The Polish jazz magazine Jazzforum has lauded him as the best Polish pianist nearly every year since 1994.

Możdżer's international career was strongly influenced by playing with Swedish bassist Lars Danielsson. Their collaboration on the albums “Pasodoble” (2007) and “Tarantella” (2009) fascinated their audience with melodious jazz sounds in a chamber musical style. In 2011 his ACT debut "Komeda" was released and awarded "Album of the Year" by Jazzforum. “Komeda” is Możdżer's personal and very self- contained tribute to legendary Polish pianist Krysztof Komeda, who became famous for composing soundtracks for movie director Roman Polanski. Soon after its release the album reached #1 in the Polish Pop (!) charts and went platinum in that country. The album was celebrated by critics and fans around the world. Leading German newspaper “Sueddeutsche Zeitung” simply called Możdżer a “phenomenon” and British newspaper “The Guardian” wrote on his playing on “Komeda”: “Możdżer's swaying swing and slow-melody nuances suggest Keith Jarrett at times, but his outburst of percussive playing, flinty treblenote parks and staccato drum pattern sounds are all his own.”

The duo album “The Last Set – Live at the A-Trane” (released in fall 2012) is an impressive and worthy legacy of a unique musician full of curiosity and versatility: US pianist Walter Norris. While two-piano albums often have an all-you-can-eat tangle of notes to them and nearly always seem too busy, this album like the very best of this specialised area within jazz has a lucidity to it. Możdżer clearly adapts his very easily distinguishable playing, which is grounded in Komeda and Wayne Shorter, with his own arsenal of gracenotes and little leaps and bounds to fit Norris’ style, which is more opaque but very stimulating.

On “Jazz at Berlin Philharmonic I” (April 2013) three world class pianists met on December 11, 2012, at the prestigious classical concert hall to play solo, in duos and trio. Together with Iiro Rantala and Michael Wollny, Możdżer succeed in creating a defining moment in music, in which “jazz and classical meet as equals” (Tagesspiegel), little wonder really, with all three of them being such crossover fans.
In fall 2013 “Polska” will be released on ACT. The new album by the magical trio: Leszek Możdżer, Lars Danielsson and Zohar Fresco (percussion).