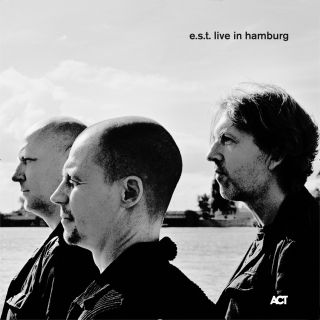 Catalog number: ACTLP 60021
Releasedate: 01-11-13
The “Jazz album of the decade 2000 – 2010” (London Times) now available on vinyl: 4er LP Collector’s Edition remastered and including a 12 page Vinyl-size booklet (with photos by star photographer Jim Rakete): The Times: “In a decade when Scandinavia staked a claim as the home of progressive jazz, no one had more success than this piano trio. The tragic death of Esbjörn Svensson halted their march to global success.” e.s.t.´s concerts are legendary and have won the band fans worldwide also outside the jazz field. This sold out concert in Hamburg on November 22, 2006 took place towards the end of the German leg of the Tuesday Wonderland world tour. Altogether the band performed more than 100 shows in 24 countries to an audience of well above 200,000 people during that tour. The recording reflects the concert one to one, no songs were...
e.s.t. is a phenomenon: A jazztrio, which sees itself as a popband that plays jazz, which broke with the tradition of leader and sidemen in favour of equality within its members, which not only plays jazz-venues but also venues usually reserved for rockbands, which uses light effects and fog-machines in their live shows, which gets a whole audience to sing-a-long with jazz- standards as eg. Thelonius Monk’s “Bemsha Swing”, is a trio that goes beyond the scope of the usual classic jazztrio. Their music can be found in the pop-charts and their videos are playing on MTV Scandinavia. With their unique soundscape, combining jazz with drum ‘n’ bass, electronic elements, funk rhythm, and pop and rock as well as European Classical music, e.s.t. won an audience spanning from the classic jazz-fans to the youngest HipHop fans. Critics and audiences world-wide agree: e.s.t. is definitly one of the most innovative jazzbands of today.

Openness, curiosity, and a little bit of chance are all a part of Esbjörn Svensson’s artistic foundation: “I play piano because we didn’t have any other instrument in the house. Actually, I would have rather played drums. For instance, as a kid, I put together a set out of old odds and ends, and tried to sound like “Sweet” on “Ballroom Blitz”. But then Magnus Öström came with his drums, and I decided to stay with the piano. Magnus and I grew up together, and have played together from the beginning. When Magnus was given his first drum set, he brought it over to my house, and we started playing. We had no idea how to play, but it was a lot of fun. Since we didn’t have a teacher, and no one was telling us how to play, we were able to gradually develop our music in a very unique, individualistic way.”

From the mid-eighties on, Svensson and Öström established themselves as inspiring sidemen in the Swedish and Danish jazz scenes. They formed their first trio in 1990, but it wasn’t until 1993 that they got the necessary lift to get a CD off the ground. It was then that they met Dan Berglund. Both were fascinated by the structural strength and creative diversity of his playing and were able to entice Berglund into joining the trio.

By the mid nineties the trio had made a name for themselves in Sweden and got a recording- deal with the pop-oriented label Superstudio Gul / Diesel Music. The first album for this label, released the same year, was “E.S.T. Plays Monk” (ACT 9010-2), which quickly sold over 10.000 copies in Sweden. And the talented newcomers started to collect prizes: in 1995 and 1996 Esbjorn Svensson was awarded Swedish “Jazzmusician of the Year” and 1998 “Songwriter of the Year”, and the 1997 release “Winter in Venice” (ACT 9007-2), – consisting mainly of original material – was awarded the Swedish Grammy.

The 1999 release of “From Gagarin’s Point of View” (ACT 9005-2), was the first e.s.t. album to be released outside of Scandinavia through the German label ACT. Live appearances at festivals as JazzBaltica and Montreux marked the beginning of the international break-through of the band.

A year later the CD “Good Morning Susie Soho” (ACT 9009-2), was released and earned the trio the title “Trio of the Year” by Jazzwise, UK. e.s.t. toured on the “RISING STARS” Jazz Circuit and played all major festivals throughout Europe. The same time Sony Columbia USA released the first CD “Somewhere Else Before” – a compilation from the European albums “From Gagarin ́s Point of View” and “Good Morning Susie Soho” in the USA.

“Strange Place For Snow” (ACT 9011-2), e.s.t.’s 2002 release was supported by a 9-month tour through all European countries, but also the USA and Japan. Music from that album also became the soundtrack for the French movie “Dans ma Peau“ directed by the french actress and screen writer (“8 Women”) Marina de Van. The album earned numerous awards for the band such as the Jahrespreis der Deutschen Schallplattenkritik (the “German Record Critics’ Award” is voted by a jury of independent music critics, writers and editors), the German Jazz Award, Choc de l’année (Jazzman, France), the BBC Jazz Award, the Victoire du Jazz – the French Grammy – as best international act and also the “Relevation of the Year” award, a special award from MIDEM.

In 2003 the band released “Seven Days of Falling” (ACT 9012-2). The album immediately after release went into the pop album charts in Germany, France and Sweden (topping at No. 15). Besides in Europe the album was also released in the USA, Japan and South Korea. The band supported K.D. Lang on her tour throughout the USA performing in stadiums and large concert halls to over 50.000 people. More than 100.000 people watched them perform live in the 12 months after the release of “Seven Days of Falling”. As a result of all of this e.s.t. was awarded the Hans Koller prize as “European Artist of the Year” in December 2004 – voted by 23 jazz industry professionals from 23 European countries.

“Viaticum” (ACT 9015-2), released in January 2005, has even surpassed the success of the previous albums. It went into the top 50 pop album charts in Germany and France and topped in Sweden on position 4. The band extensively toured the world to support the album release and appeared in major concert halls and festivals in Europe, Japan, South Korea, China, Australia, Brazil and the USA. They were awarded a gold and a platinum German Jazz Award, the IAJE award and the Swedish Grammy and were the first European jazz band ever to grace the cover of the DOWNBEAT jazz magazine in the USA (May 2006 issue). Not only in Europe e.s.t. have become a major concert attraction in their own right pulling large crowds all over the continents.

Following the release of their album “Tuesday Wonderland” (ACT 9016-2) in October 2006, e.s.t. yet again toured extensively throughout the world and played to audiences totalling 200.000 in more than 100 concerts in 24 countries. The album was literally smothered with prizes, e.s.t. were recognized a number of times as “artist of the year”, received the Swedish Grammy award for the 6th time as well as the German Jazz Award in gold and platinum.

On 22 November 2006, they gave the last performance of the German “Tuesday Wonderland” tour in a sold-out Laiszhalle in Hamburg, Germany. The concert was a celebrated triumph. The NDR recording of the night is to be released as a double CD in best sound quality on November 22nd 2007, exactly a year after the event: “e.s.t. live in Hamburg” (ACT 6002- 2).

“Leucocyte”, which came out on 1 September 2008, was to become the musical legacy of Esbjörn Svensson, after his sudden passing on 14 June that same year. It is the band's most audacious and innovative album to date. For e.s.t., spontaneous jam sessions were the way to rejuvenation. In the course of their tour, they often rented a local recording studio for a day or two and just did their thing, without compositions or songs. They interacted freely with each other and let themselves be carried by the flow of the music, the ideas, the coming and going. The e.s.t. musicians needed this freedom to explore new musical regions, or as Esbjörn Svensson always put it: "to follow the music". The essence of this voyage of discovery is the energy of intoxication; a trip through the blood vessels without a safety net of composition or stylistic restrictions, on which the limits of musical communication can be sounded out.

In the course of trying to process the terrible loss of Esbjörn Svensson, Dan Berglund and Magnus Öström finally devoted themselves to their own, new projects, after a period of musical numbness and despair. Berglund founded his independent jazz project with old friends from before e.s.t., which recorded two highly successful albums in “Tonbruket” (ACT 9023-2) and “Dig it to the End” (ACT 9026-2), garnering, among other honours, the Swedish Jazz Grammy. Öström presented no less fascinating CDs in the form of “Thread of Life” (ACT 9025-2) and “Searching For Jupiter” (ACT 9541-2), which also harkened back to his Progrock influences from the pre-e.s.t. era.

On 30 March 2012, “301” (ACT 9029-2), a new e.s.t. Esbjörn Svensson Trio studio album, finally came out: More original recordings from the last session in Studio 301 in Sydney, Australia. A triumphant echo from an unforgotten band and an homage to the jazz revolutionary who passed away much too soon in 2008.