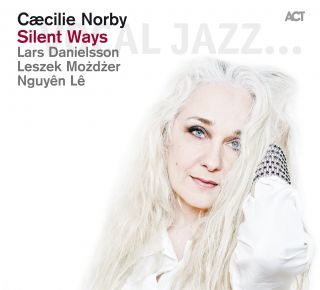 Catalog number: ACT 9725
Releasedate: 06-12-13
It's not all that long ago that the boundaries between classical, pop and jazz were easily defined, in the European middle classes especially, there was seldom a way back when a direction seemed to be defined. And so it was that the 14 year-old Dane Caecilie Norby found herself in the classical world – her mother was an opera singer, her father a composer – until one day a school party shook the foundations of her musical structures. Music by Creedence Clearwater Revival was being played and it fascinated her: "Up to then, it had been Mozart who had charmed my inner princess, but that night made it fully clear to me that that music was the same thing in different wrapping paper," she recalls. "My young, innocent, cultivated universe made entirely of classical music had been changed forever. Dylan didn't hit the notes when singing, Fogerty played the same four chords over and over, very loudly, and yet it worked: I was riveted by the melancholy feeling of this melodic soul-rock."

Since then, Norby listens solely to her heart and evaluates the musical quality of melodies fully free of genre restrictions. She became a star in her own country with her funk-jazz band "Frontline" and the pop duo "One Two" together with Nina Forsberg, before her bridge between the genres caused an international furore, becoming the first Scandinavian woman to be signed by Blue Note. It is a path between worlds that her ACT debut "Arabesque" (9723-2) defined two years ago: She wrote her own lyrics to classical works, from Rimski-Korsakov and Ravel to Michel Legrand, and transported them to jazz with the aid of her husband Lars Danielsson and their band.

Now, with her second ACT album "Silent Ways" she goes back in the other direction to some extent. She selected a dozen of her favourite singer/songwriter melodies – including "Hymnen" by herself and her husband, and charged them up with classical and jazz influences. The almost chamber-musical, tranquil form hinted at by the album's name is classical, as is the emotional expressiveness of her interpretations – just listen to her meditative, almost spiritual versions of the Leonard-Cohen songs "Winter Lady" and "In My Secret Life". The jazzy approach lies in the singing technique, in the arrangement, and of course the hand-picked musicians in the band improvising magically together.

"At the start of recording, we demanded that all the musicians put their life story on the table," Norby reports. And how they did! The unmistakable Asian lines of star guitarist Nguyên Lê are especially apparent on "Like A Rolling Stone". Leszek Możdżer contributes the swirling rhythmic and melodramatic harmonies of the eastern European music tradition, most obviously on "Black Hole Sun". Drummer and percussionist Robert Mehmet Ikiz brings the polyrhythmic of his Turkish roots and the Nordic groove of his Swedish homeland with him. Lars Danielsson then refines it all with his enchantingly melodious bass and cello lines.

A powerful, thrilling, convincing mix, on the classics like Bob Dylan's "Like A Rolling Stone", John Fogerty's "Have You Ever Seen The Rain" and Paul Simon's "Hearts And Bones", on the earthly tracks like Barrett Strong's "Papa Was A Rolling Stone", the originally bulky works like Tom Waits' "Diamonds And Gold", the Indie-rock anthem "Hurt" by Nine Inch Nails genius Trent Reznor or on the loungey title track "Silent Ways" composed by Wolfgang Haffner, to which Norby contributes her wonderful lyrics. It is "the sound of the new, European jazz" that vocalist Caecilie Norby stands for like no other, the way she best defines it.

Danish singer Cæcilie Norby has never cared for musical stereotypes. To her, the melody of a song is the music’s essence and the only attribute to judge a composition – regardless of the genre. An attitude eminently suitable to describe her fascinating career and the secret to her success: Norby’s parents are classical musicians. But only after she had discovered jazz and blues for herself, she decided to follow in the foodsteps of her parents and to become a professional musician.

As a teenager, she was very much into rock and pop music. She soon made herself a name as a traveler between the genres with her funk-jazz-band „Frontline“ and won every Danish jazz award in the early 80es. In collaboration with Nina Forsberg Norby founded the pop-rock band „One Two“ in 1985. The duo sold quarter of a million records only in Denmark.

Working with Forsberg and as a solo artist, Norby was the most important Sacndinavian singer to combine pop and jazz music and paved the way for the international success of singers like Rebekka Bakken, Silje Nergaard or Viktoria Tolstoy. Norby was the first Scandinavian singer signed to ”Blue Note” and published four albums on this legendary label.

She collaborated with many international stars - from Bugge Wesseltoft to Mike Stern, Chick Corea or Kurt Elling. Her most important musical partner and producer of almost every of her solo albums likewise is the most important person in her privat life: Her husband, bass-player Lars Danielsson.

„Arabesque“ is Cæcilie Norby’s 2011 ACT-debut: For the first time she wrote lyriks to classical, impressionistic compositions by composers like Satie or Ravel. But Norby not only manages to find the right jazz-tone to suite this classical melodies, but also impressively proves what a great ”classical composer” Michel Legrand can be.
Cæcilie Norby constantly builds bridges with her music: She attracts classical music fans, jazz freaks or pop fans and everyone keen on good melodies.