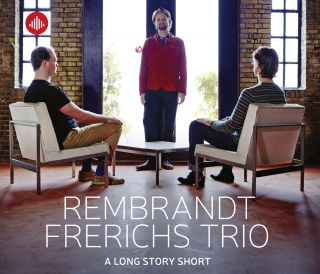 Catalog number: CR 73388
Releasedate: 31-01-14
This album is inspired by the conceptual approach of Dutch painter Piet Mondriaan. In his search for the essence of beauty, Mondriaan developed his own visual language. His example felt like a great encouragement for the trio to look for ways to blend all their influences into an individual style that reflects the time we live in.

In 2014, the new album of pianist Rembrandt Frerichs is released on Challenge Records.

The title 'A Long Story Short' has always been a phrase that appealed to rembrandt's imagination and is also the title of one of the more cinematic pieces on this album. It is a phrase that, on multiple levels, speaks to the artistic development of this trio.

Rembrandt uses poetry-based rhythms, one of the many reasons why he loves the art music of the Middle East. Frerichs: "l often wondered why an Arabic 23/8 rhythm sometimes touches me more than straight ahead 4/4 time. i think it is because, like a line of poetry, its cadence invites you into a dancing, bouncing universe full of opportunities to change your perspective on your own musical language".
Even if their shared love for Middle Eastern music can hardly be heard literally on this album, it is an important compositional factor. “If I hadn’t spent many hours listening to the music of Kayhan Kalhor, Ahmet Meter, the Al-Kindi ensemble or the Ottoman masters, I would never have come to appreciate the rhythmic aesthetic of their part of the world. The challenge is of course to translate this aesthetic to the musical language of the modern creative piano trio. In this process I always try to keep in mind Mondriaans principal of trying to capture the essence of something by the abstraction of it.”

It is in the recording studio that a long story with many side-tracks needs to be edited down so it can be told in the timespan of an album. In just two days a number years of creative development is condensed into a short and clear message. “I am very happy with the way this worked out, but that doesn’t mean though, that the arrangements of these pieces are now set in stone. In fact, one of the goals of this working band is to continue to refine the performance of the pieces, trying new angles and letting different sides of the compositions reveal themselves.”

““One of the highlights of the North Sea Jazz Festival” Jazzmagazine wrote about pianist and composer Rembrandt Frerichs...One couldn’t hope for a better recommendation. Rembrandt (1977) is a pianist with a broad perspective. He is familiar with the American jazz tradition, but wants to avoid the well-trodden path. His curiosity and knowledge of the art music of different parts of the world urge his music to develop constantly. The way Rembrandt searches for new extensions of his musical idiom makes him an extraordinary musician, always pushing the limits of what he believes are artificial boundaries made up by music industry, like classical music, improvised music and worldmusic. At age 22 Rembrandt made his debut at the North Sea Jazz Festival. During that time he received the scholarship for excelling young musicians to study in the United States. Directly after graduating he was asked to start teaching at various conservatories. In 2007 his debut album Self Portrait was nominated for the Dutch Grammy (Edison Award). His music brought him to legendary Jazzclub Birdland in New York and festivals and clubs in Europe and the Middle East. The Dutch government selected the now 35-year-old artist as Music export Artist, presenting the top of Dutch arts around the world.

“One of the highlights of the North Sea Jazz Festival”
Jazzmagazine

“A master on his instrument”
De Volkskrant