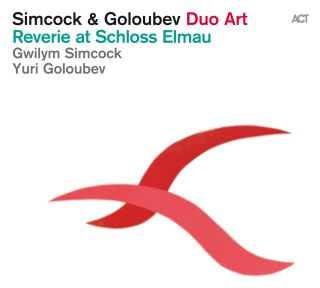 One born in Wales, the other in Russia, most of Europe stands between them. But in terms of their musical journeys, they appear to have been leading parallel lives. Both were classical music prodigies and have world-class techniques on their respective instruments. Both of them were set on a lifelong career path in the concert hall, Goloubev the elder of the pair at 41, was for twelve years the principal double bassist for the Grammy-nominated Moscow Soloists, widely considered one of the most distinguished chamber ensembles in the world. As a child Simcock achieved the highest music exam grade for in the whole of the UK at just 11 years old. He studied piano, French horn and composition at Chetham's School of Music, before going on to study jazz piano at London's Royal Academy of Music.

They first met in 2005 on a recording date with Klaus Gesing - Heartluggage (ATS 2006) and there was an instant rapport between the pair of them. They then went on to record a trio album with asaf Sirkis - "SGS Group, Inc. presents" (2008) then on Yuri's album "Metafore Semplici" with Klaus, Asaf and an Italian trumpet player Giovanni Falzone (Universal, 2009) plus a couple of other less significant works. In 2008 Goloubev recorded with Simcock for his second piano trio CD "Blues Vignette" (Basho 2009). Simcock has remarked on their closeness, as to how they both have perfect pitch, “so when the music is free, it’s easy to make instant music because we both know what we’re playing at any one time. It’s easier to second guess what’s coming next. What I like about Yuri’s playing is it’s very linear. It comes from a strong melodic background and when he plays arco it’s this incredibly rich tenor sound.”
This is very much in evidence on Reverie at Schloss Elmau. Simcock has been before to the cultural retreat set in the Bavarian Alps, referred to in the album title. It was there that in 2011 he recorded his solo debut Good Days in Schloss Elmau for ACT, for which he was nominated for the high profile Mercury Music Prize in the UK.

Simcock says the opening track of the new CD, ‘Pastoral’ is, “written with the beautiful surroundings of Elmau very much in mind”. The spontaneous, ambient free-interplay between bass and piano that opens the piece is punctuated by Simcock’s deliciously mysterious theme, perhaps also a dedication to his father’s great love for Russian classical music especially Prokofiev and Stravinsky, something that rubbed off on him while growing up. But nineteenth century ‘romanticism’ is the classical era that perhaps resonates the most with both musicians. This is apparent on Goloubev’s ‘Lost Romance’, as well a piece sprinkled with Simcock’s artfully sophisticated jazz harmony.

The interaction between bass and piano at the piece’s climax has the fluency and give-and-take of a deep conversation between close friends. ‘Antics’ is more for fun, with its impishly dance-like rhythmic piano vamp, written by Simcock, “to be performed on 50 battered old pianos around the streets and parks of London in summer 2012 and with two dancers.” ‘A Joy Forever’ could be a song without words. The Russian’s richly-hued, singing arco bass is backed by a simple melancholic piano accompaniment by Simcock. Then Goloubev switches to fingered bass as he does seamlessly throughout the recording; his playing here reminiscent of a hero to both, the great Jaco Pastorious, especially the kind of highly expressive, interweaving lines on the classic recordings he made with Joni Mitchell. The album moves from an instrumental version of singer-songwriter jazz-pop to its classical equivalent: Goloubev’s ‘Non-Schumann Lied’ is a reflection of his “love of German composers of the nineteenth century although,” he says, “this one should really have been called ‘Non-Brahms Symphony’”.

On ‘Flow’, Simcock’s galloping solo sees him merging both languages of jazz and classical as if they have always co-existed. The final track is the only non-original, ‘Reverie’ written by the nineteenth century Italian romantic composer and virtuoso double bassist Giovanni Bottesini. “ This one I know from my student years, as it forms part of the ‘standard’ classical bass repertoire,” says Goloubev. “Here rather than sticking to the original piano part, Gwilym follows the jazz charts that we derived from it.” It’s yet another example that reveals the duo’s twin ambitions. That is to integrate the worlds of classical and jazz as they hear and feel them, then to filter it into a freshly cohesive identity. On the exquisite duo recording Reverie at Schoss Elmau, they have certainly reached a new peak in that ambition.


Gwilym Simcock
Chick Corea simply calls him an "original. A creative genius", while Jamie Cullum raves about his playing: "I'll be watching our finest young piano-player Gwilym Simcock." Born 1981 in Wales, Simcock – now living in London –is undoubtedly right at the top of European jazz and considered one of the most gifted pianists and imaginative composers on the British scene. He took classical piano lessons at one of England's most renowned music schools from the age of three, building up a musical background that defines his playing to this day.

He certainly could have become a successful classical pianist if he had not discovered Keith Jarrett's and Pat Metheny's music by the age of 15, finally drawing him into jazz. Having completed his studies at the Royal Academy of Music he is able to move effortlessly between jazz and classical.

Simcock was acknowledged as a great talent very early on and soon got to play with stars like Dave Holland, Lee Konitz, Bob Mintzer and on Bill Bruford's "Earthworks". Winner of the Perrier Award, BBC Jazz Awards and British Jazz Awards in 2005, Simcock was the first BBC Radio 3 "New Generation Jazz Artist". He also was voted "Jazz Musician of the Year" at the 2007 Parliamentary Jazz Awards.

The release of his ACT debut "Good Days at Schloss Elmau" (ACT 9501-2) early in 2011 marks his final breakthrough. Along with recordings by Adele, Katy B and James Blake, the solo piano album was nominated for the prestigious Mercury Prize as one of Great Britain's 12 best albums of the year. His music has been widely acclaimed as 'engaging, exciting, often unexpected, melodically enthralling, complex and wonderfully optimistic' – and it is exactly his harmonic sophistication and ability to creatively combine a vast array of musical traditions to a very unique and highly energetic narrative that fascinates people.
Like a weaver combining all sorts of different threads to one beautiful drapery;

Together they sound out all imaginable possibilities of this unusual instrumentation and form a unique miniature orchestra in skilfully interweaving strong distinctive melodies, complex harmonies and bounding folk-tinged rhythms along with many other influences from around the world. German radio station BR Klassik praised the album as "a virtuous and energetic variety of styles all of a piece." - A judgement easily to be applied to Simcock's playing in general.