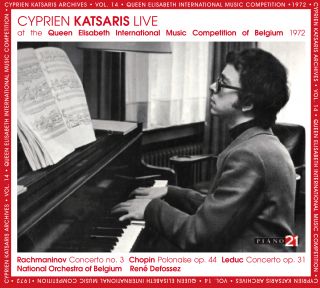 Catalog number: P21 047A
Releasedate: 01-01-90
Notwithstanding his lack of experience on the scene, Cyprien Katsaris decided in 1972 to take part in the prestigious Queen Elisabeth Competition of Belgium, famed for its daunting standards. The only western-European challenger amongst the twelve finalists, the young pianist played Chopin’s Polonaise op. 44, the compulsory Concerto by the Belgian composer Jacques Leduc, which he had to learn in eight days, and Rachmaninov’s magisterial Concerto no. 3. Accompanied by the excellent National Orchestra of Belgium under René Defossez, Cyprien performed this monument of pianistic literature in the most difficult circumstances imaginable: the main concert hall of the Palais des Beaux-Arts packed, broadcast live on radio and television and before an adamantine jury including Emil Gilels, Leon Fleisher, Annie Fischer and Alexander Brailowsky. The placing of Katsaris in 9th position provoked both phenomenal applause and massive, prolonged booing of the jury unprecedented in the history of the Competition. Allegedly King Baudouin himself was heard to exclaim, “that young pianist very nearly caused a revolution!”