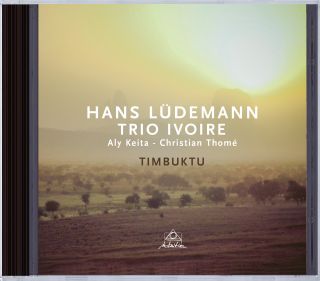 
Pianist Hans Lüdemann, Echo Jazz Prizewinner 2013, founded the trio in 1999 and has been its leader since then. He started his career as a musician in Hamburg, where he studied under Joachim Kühn, among others. He continued his studies in Canada and Cologne, where he still lives today. He soon became one of the pianists most in demand in Germany and has played alongside of Jan Garbarek, Eberhard Weber, Paul Bley, Marc Ducret, Toumani Diabate, Heinz Sauer, Angelika Niescier and many others. He discovered African music with its 12/8 rhythm and very individual pentatonic scales at an early stage during several trips and tours; the music is thrilling and you can even dance to it despite its often very complex polyrhythm. As a result, his work with "Trio Ivoire" has become a core piece of his many varied activities.
Aly Keita was born in Abidjan (Ivory Coast), but grew up in Mali where he already had lessons in playing the traditional pentatonic balafon as a child. He met George Makinto and consequently encountered jazz when he was still an adolescent. He developed his own diatonic balafon, which enabled him to play in new ways and provided him with many new chances. Starting from the 90s and until today, he has played alongside of Pharoah Sanders, Rokia Traoré, Jan Garbarek, Majid Bekkas and Omar Sosa, to name just a few. Keita is the most skillful and versatile balafon player worldwide today. He is also bursting with ideas and full of boundless energy. He even developed his own chromatic balafon for these recordings.
Christian Thomé is an extremely versatile drummer. Following his studies in Holland, he was able to gain an excellent reputation in new music, jazz and world music. You can hear him on recordings by Moritz Eggert and Markus Stockhausen as well as the Schäl Sick Brass Band. He has played alongside of Michel Godard as well as Dhafer Youssef, Till Brönner and Lee Konitz. He fits in like a puzzle piece into a constellation, which is characterized strongly by rhythm anyway.