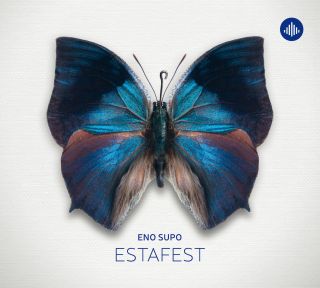 Catalog number: CR 73393
Releasedate: 18-04-14
Four high profile improvisers out of the Dutch jazz scene teamed up and formed Estafest.
Anton Goudsmit and Oene van Geel played in duo and so did Mete Erker and Jeroen van Vliet. The idea to combine these duos was thrilling for all of them and created a whole new world of possibilities.

Four unique musicians, each a match for the other, create cutting edge music where new directions can be taken any moment. They all contribute brilliant short pieces  which are shaped on stage, creating an atmosphere where both the audience and the players are swept along by the power of the moment.

Jeroen van Vliet about this new project: "Estafest live!, our first recording was a lively prelude to this new album, recorded among the peace and tranquility of the beautiful Fattoria Musica studio. From our concerts we knew that Estafest has many facets, that in addition to groove and adventure was also poetry and beautiful sounds.

It was a big party exploring all kinds of new things and setting these pieces to disc with the 4 of us and engineer Chris Weeda, and we are really happy with the results."

The musical result is exciting, magnificent, hilarious and breathtaking.

The press about their previous album 'Live':
According to the jury of the VPRO Boy Edgar Award, Oene van Geel distinguishes "with a superior swing, an enormous ability to improvise, a thorough knowledge of the history of jazz and a permanent curiosity to different genres, whereby he sets an example in the crossover world on an atypical manner.
- NRC Handelsblad


BIOGRAPHY ESTAFEST
Four high profile improvisers of the Dutch jazz and improv scene have teamed up and formed ESTAFEST. In this unusual line up, these musicians combine their distinctive instrumental skills and sound, wrapped up in brilliant short pieces, which are shaped on stage. They actually create an atmosphere in which both the audience and the musicians go with the flow of the moment. The result is cutting edge music, exciting, hilarious and breathtaking. Anyone who has seen the group was surprised, moved, nurtured and inspired. Since the individual members of Estafest toured the world with different groups, they can't wait to bring their favorite band to an ninternational audience. In the Spring of 2014 the group will release their sophomore album 'Eno Supo' (Challenge Records), the follow up of ESTAFEST Live! (Challenge Records, 2011).

METE ERKER
SOPRANO AND TENOR SAXOPHONE
Is considered one of Holland's most distinctive saxophonists. Besides his work with an impressive list of greats, among others the David Liebman Group and senegalese master drummer Doudou N'Diaye Rose, he is currently playing inThe Bridge: Martin Fondse Orchestra with Brazilian superstar Lenine, and is the driving force behind the saxophone quartet Artvark, the Mete Erker Trio, and not in the least ESTAFEST.
More info at: mete.nl

OENE VAN GEEL
VIOLA AND CAJON
Is known as a composer and for his work with the contemporary string quartet ZAPP4 and for his own projects, such as The Nordanians and OOOO. In 2011 Oene was selected to join Take Five Europe, a masterclass and residency for the top 10 of Europe's emerging jazzscene. In 2013 Oene was awarded the prestigious VPRO Boy Edgar Prize, thé Dutch jazz award.
More info at: oenevangeel.com

ANTON GOUDSMIT
GUITAR
Is known for his current group the Ploctones and played for years in the very popular New Cool Collective band. As a guest musician he performed with innumerable bands and artists. In 2010 he was awarded with the VPRO Boy Edgar Prizeand in that same year he received the Duiveltje Award, thé Dutch pop award for best guitarist.
More info at: antongoudsmit.nl

JEROEN VAN VLIET
PIANO
Has grown into an established pianist who is much in demand. Eric Vloeimans a/o has a problem when Jeroen is unavailable, since Jeroen is part of various Vloeimansprojects. Furthermore Jeroen is an outstanding composer. In 2008 North Sea Jazz selected him for the festival's composition project. Jeroen has played for over 20 years with ESTAFEST saxophonist Mete Erker.
More info at: jeroenvanvliet.com